Ah I see... I've clearly got a lot to learn. I hadn't touched most of these newer features yet. Thanks again!

lol wow the effect is way too fast as I had it originally! Here's a more subtle version in case anyone else is looking for a simple underwater warp shader
You do not have the required permissions to view the files attached to this post.

lol wow the effect is way too fast as I had it originally!

Yeah I think I went cross-eyed the first time

I wonder if someone can explain how the alpha property works for texture shaders? It's always seemed non-linear to me and impossible to counteract. Something I've just tried doing is actually causing me to be suspicious it's a bug but I want to make sure I'm not missing something.

So I have a 3D floor with the line opacity property set to 254. I have the software fuzz shader being applied to it's texture, multiplying the pixels' alpha (ie. colour.a) by values between 0.1875 and 0.65625. But what I get are low alpha values being shunted to zero (or lower?) instead. Previously I've assumed it was my error and just abandoned projects until I can figure it out, only now I'm using someone else's proven code verbatim. 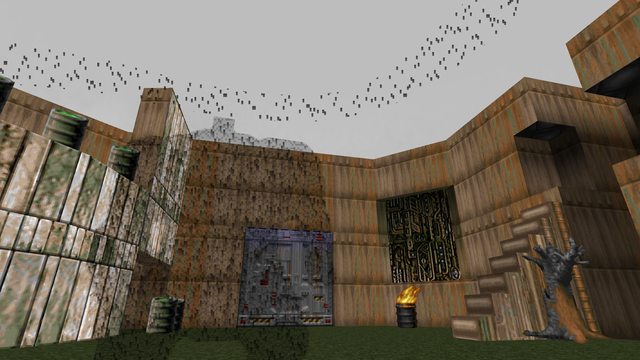 You can see the detail is greatly reduced in the bridge compared to the spectre even though they share identical code. Are we supposed to treat colour.a differently in custom shaders?

Hello, I have a question regarding shaders in zDoom. First of all, I have writen my own shaders before in some Unity projects so the basic concepts are not new to me.

I would like to know if it's possible to have a material for a md3 model that shows it's bitmap texture mapped to the viewport, as opposed to being uv-mapped to the model's local vertices. So, if the model moves on screen, the triangle(s) in question would just show a different part of the texture. If you remember the "fake specular" effect in Alone in the Dark (for thing like metallic and reflective surfaces), you know what I'm talking about.

The effect can be seen here, in the small mirror item:

Can this be done?

I know that MD3s can use materials, but can they also use custom shaders?

Instead of making a new thread I'm bumping this one

I'm looking to make a shader to rotate a graphic at the center but have been unsuccessful. I tried modifying the shader that is in the wiki all sorts of ways but the results were just varied wave patterns. Is this even possible?

All im interested in is using those screen shaders like the Blaarg CRT stuff from zsnes.
Old school scanlines and rf artifacts like a vcr recording.
How do you get that going in zdoom?

SPZ1 wrote:I'm looking to make a shader to rotate a graphic at the center but have been unsuccessful. I tried modifying the shader that is in the wiki all sorts of ways but the results were just varied wave patterns. Is this even possible?

Give this one a try instead:

RSSwizard wrote:All im interested in is using those screen shaders like the Blaarg CRT stuff from zsnes.
Old school scanlines and rf artifacts like a vcr recording.
How do you get that going in zdoom?

There's scan lines in Retroshader and some other neat stuff.

I'm slowly working on a new Screem that will have them too: 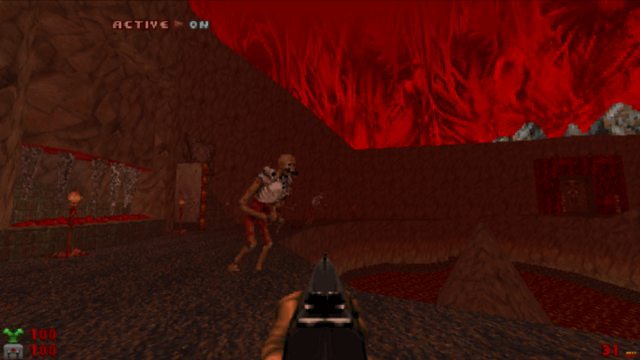 It's also enabling pixelation with a softening filter.

I'm looking for custom smooth liquid shaders for flats and waterfalls. Would someone be able to direct me to these types of shaders?

On the GLDEFS wiki page, it says:

The following uniform variables are always available to your shaders:

Is there a possibe way to have "shaders" encased in a texture?
Say I wanted to have this foggy glass texture that when viewed through blurs part of the screen to give the illusion that its affecting all them light beams and stuff.

Material textures do not have access to the current screen colour and depth, so no that's currently not possible. Those two things are needed to do any effects that seemingly affect what is "behind" a texture - for example, refraction behind a glass or water, or "heat haze".

Is there anyway to get the viewport coordinates?

I want to create a shader, where the image is fixed to the viewport, not the 3d world. i.e: the texture bits shown is based on where the pixels are on the 2d rendered scene if that makes sense?

Essentially i want to create a nifty portal-type effect. Maybe like a space background or something, where the spacey background is fixed no matter where it is observed from or how the player angles the camera.

I do see these uniforms, but this is mainly the texture coords and camera coords i believe.

Also this is compiled into the shader in the cpp:

I wanna add warp3 and warp4 shaders but I get a bad syntax error when booting up the game to test them. How do I properly add them in?

EDIT: Nvm, I made a topic for this issue.