Forum rules
Before asking on how to use a ZDoom feature, read the ZDoom wiki first. If you still don't understand how to use a feature, then ask here.
7 posts • Page 1 of 1

I'm working on my first map and I think I'm pretty happy with the layout. It looks a bit like this, it's pretty complicated for a first map I guess, but hey - at least I actually finished the level progression this time: 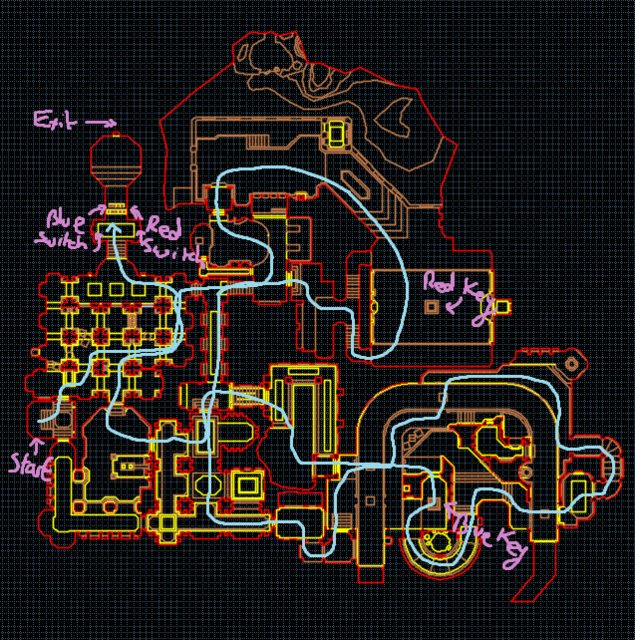 I'm now trying to fill it with monsters and it just feels... off? Like it's too full and too empty at the same time. Also when I include more than one kind of mob, they seem to start in fighting almost instantly.

I've done a bunch of reading and seen a lot of things about making it so it doesn't feel like monsters are just waiting for you, but I can't seem to not do that. Any ideas or advice?

Here's a screencap of one of the larger encounters on my map as an example. It's a courtyard with a raised wall (think like a castle battlement) at the back. The player enters and exits following the arrows I've drawn on. 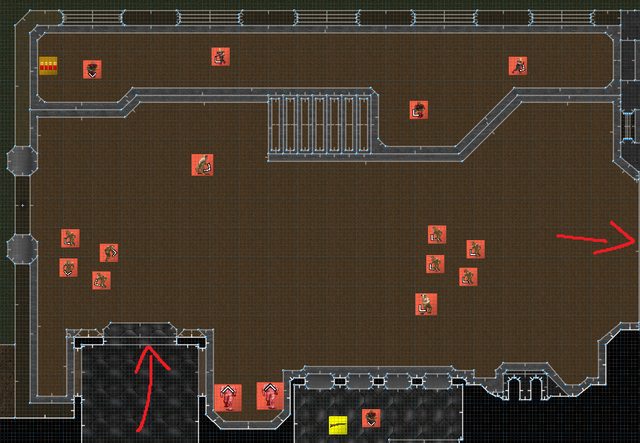 Preventing infighting is a matter of placement. Don't place them too close together, or they'll just wipe themselves out. Have the same types in a group together, then spread out a bit from another group. You can also use Thing_Hate to balance it out a bit if you want. Also, I always learn best from paying close attention to maps I like, and see how they do it. A good map has a rhythm to it, or at least that's what I think.
Top

If you really, really want to prevent infighting, there is a MAPINFO option to disable it. However, infighting is (quite rightly) considered part of Doom's gameplay. Therefore, if your map is an otherwise true-to-Doom gameplay affair, perhaps this wouldn't be the best route to go.
Top

Enjay wrote:If you really, really want to prevent infighting, there is a MAPINFO option to disable it. However, infighting is (quite rightly) considered part of Doom's gameplay. Therefore, if your map is an otherwise true-to-Doom gameplay affair, perhaps this wouldn't be the best route to go.

Yeah, 100% want to keep it in there, but usually infighting is an added extra to a combat encounter imo, not a "guaranteed to take out half of the population" type deal.
Top

No, you definitely don't want to disable it. It takes away too much from the game. Jus' don't place unlike enemies too close together. You can also try a mix of flying and ground enemies, who are much more unlikely to infight. Or simply place groups at different z-heights, like on a higher platform.
Top

i'd say make seperate arenas if you could, like trigger linedef(s) that open another wall to release like 5 more monsters and the next part of the map, imo, i like that sorta map. but don't do it too much, as it makes it boring
Top