Forum rules
Before asking on how to use a ZDoom feature, read the ZDoom wiki first. If you still don't understand how to use a feature, then ask here.
3 posts • Page 1 of 1

I don't know why this seems to suddenly be a thing but I'm having an issue where I'm able to trigger a line in a way that I thought was impossible. Basically I have a teleporter that is raised up higher than the player can reach and around that teleporter is another sector 1px away from the teleporter lines. You are meant to arrive on this teleporter pad and then walk off to trigger an action. That's all fine but for some reason I am able to trigger this line from below by rubbing against the trigger lines. 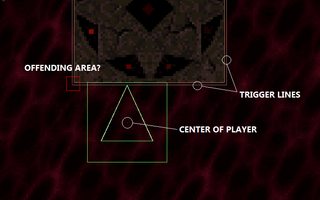 The trigger lines are front side only, but as you can see the tiny red section I marked over is front sided towards the left side of the player but the center of the player is nowhere near the line. Why am I able to trigger that tiny red section? In all my time mapping and doing things I've always had to have the player actually be over the line to trigger it, not a tiny touch of the very edge of the player radius. Speaking of which, the radius of the player is 17 instead of 16. Could this be an issue? I made that change to prevent glides but I can change it back if this is what is causing abnormal behavior if it is such. Or is this normal behavior and I've just never experienced it until this specific scenario?
Top

Re: Problem with trigger lines...

For all I know, the player's BB is what is checked against level geometry, not the center, where did you get that from? I can't figure the exact setup you have there, so I can't go any further off that.
Top

Re: Problem with trigger lines...

Well some lines that are free standing don't seem to activate at all until the player actor's center touches the line, whereas this one activates as soon as any of the player crosses the line. I have no idea what's going on with it. Since I am using UDMF I just made an action directly before teleporting to set the line special so this is avoided. However I'd still like to know how exactly lines are triggered.
Top
3 posts • Page 1 of 1