Vintage computing for fun and [no] profit

Vintage computing for fun and [no] profit

Of course Windows will have to go so Gentoo Linux it will be.

Anyone know what is the most capable PCI (not PCIe) graphics card? 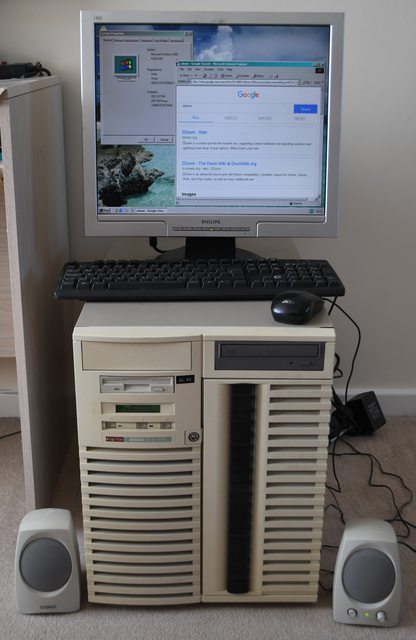 MartinHowe wrote:Anyone know what is the most capable PCI (not PCIe) graphics card?

There is also the 9500GT PCI and the GT520. Though on paper the GT430 may look more powerful, due to the PCI bandwidth limit, it can't really utilize it.
So best look for a GT 520 or GT 610 from Zotac and Zotac only, as they usually made PCI versions of their cards.

Very interesting rig, to say the least! Maybe one of drfrag's GL renderers runs on it provided you use a PCI card? ^^

Thanks, that's helpful; I have also found a PCI 8400GS that would have to be imported from the US and it supports GL 3.3 so in theory, GZDoom would work. This card, AFAIK, does not require an extra power connection and the power supplies in this thing are more than capable, it is a server after all. The question is whether Linux has drivers for it. But at likely £115 including import customs taxes etc. I won't go for that yet

Doubt nvidia has a binary blob for Alpha, but if you can get a new enough kernel you may be able to get Nouveau working. Probably won't be remotely stable, but would be an interesting thing to try. The AMD driver has had more work put into alternative architectures as of late thanks to POWER9 and ARM workstations. I think there's a PCI HD3450 or HD4350 with OpenGL 3, not sure if there's anything newer, so that'd be something to look into as well. (There does appear to also have been a 5450 PCI, but good luck finding one.) Honestly I'd be surprised if either manufacture's cards worked beyond the basic frame buffer, but who knows.

Edit: Was curious enough to do a little searching, looks like if you ever get a card it's going to be quite the uphill battle to use them. It doesn't looks like Alpha support has been removed from the Linux kernel, but it's hard to say how much maintenance it has had since around 2012. Open source drivers for either vendor weren't in a good state at that time.

Thanks @Blzut3; indeed Alpha is still in the kernel, but the only maintained and up-to-date distro that supports it is Gentoo; then again that is a compile-from-source distro, so having the latest kernel is kinda implied

Though I may try the last remaining Debian (from 2015) experimentally just to get a feel for it; with 4 9GB SCSI HDDs and a 4GB SCSI HDD (which I can use for swap, as the thing has 2GB RAM) I can dual boot. Of course 9GB isn't a lot, but its enough for DooM, and I can put /home on a separate partition

It's the Linux equivalent of beating E2M8 with a fist only

I used to use a VAX 8200 and Ultrix at University and some form of UNIX at work, so I am used to it, but by ${DEITY} it's a lot of messing about!

And yes I know you can get PrBoom for OpenVMS and a hobby licence thereof, but the scars left on my soul from managing a MicroVAX and VMS system for ten years have taken their toll; I mean I can script in DCL (and CDU, we don't parse our own args in VMS, oh no!) and boy do I feel kinda dirty knowing it

Having purged the machine of Windows (and a dying SCSI disk) ... it lives ! 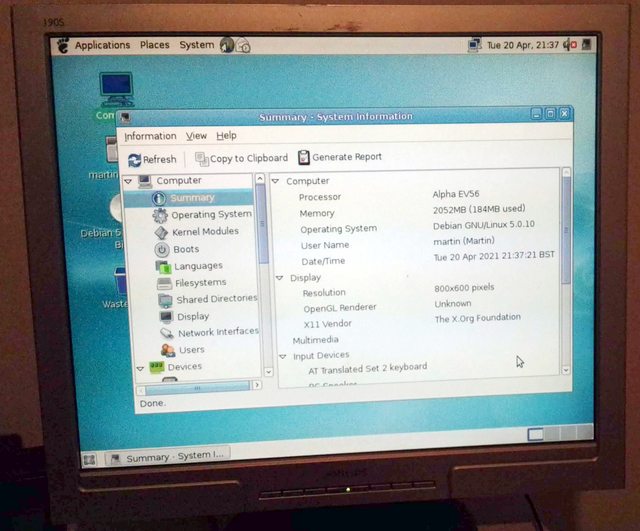 1) Better screen resolution
2) MP kernel: I have two CPUs; might as well use them

The wonders of Linux and the places it can run on.

Did you try to do a network installation of Debian sid? They do seem to be producing images and even have a compiled 5.10 kernel: https://packages.debian.org/sid/linux-i ... -alpha-smp Would actually be interesting to try just installing that on Debian 5. User space should be compatible in theory although who knows if the kernel even works in general.

Thanks @Blzut3 - will take a look. Doing this has involved learning an amount of Linux / Unix knowledge far beyond what was required in the past, so the SMP kernel from the DVD has been installed (see screenshot below); it's old (2.*), so may well give the sid SMP kernel a try later on. There is also supposed to be an unofficial continuation of Debian up to version 8 on AXP, will have a look at that too.

I have got the machine to do 1280x1024x24@60 now, yet more learning arcane stuff (xorg.conf in this case) that mere mortals should never have to do

Still haven't got the 8MB Permedia 2V to do hardware accelerated rendering yet, even though the glint driver is supposed to support it with OpenGL 1.3 and it would definitely be needed for any serious form of Doom. More stuff to learn then

Decent resolution (for a 4:3 anyway) and both processors (not cores, EV56s are single core chips) active!

It is noticeably faster on startup, especially Gnome which starts really fast; I guess this is because without OpenGL, the CPUs have to feed the framebuffer all by themselves, so having two probably helps. 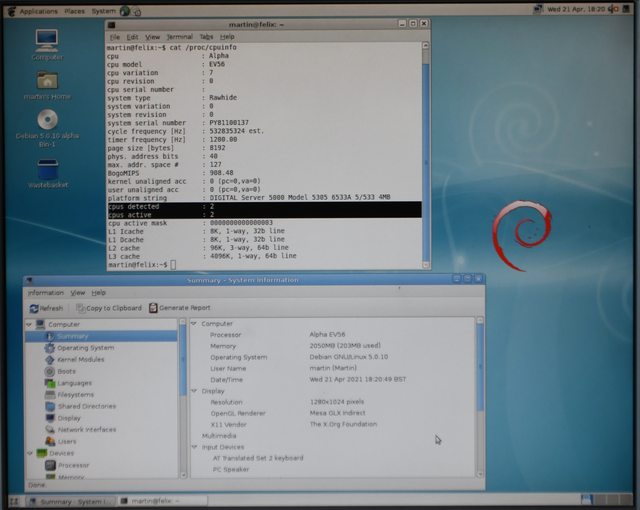 A few more grey hairs, but at last ... DooM on Alpha AXP and Linux!! Yes, I can kill demons by dual-wielding EV56s and a linux kernel! Old Debian (Lenny), software mode only and no sound for now, pm2fb is very old and alsa doesn't know about X-Fi. For the record, my first victims were a couple of zombiemen on E1M1. 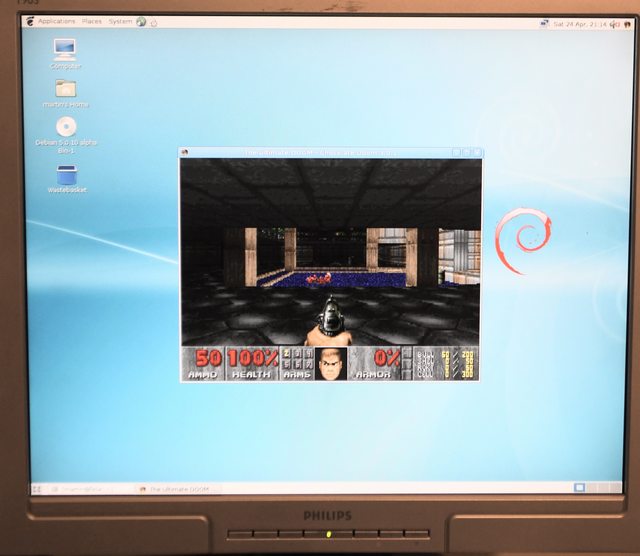 Nice. You can probably get ZDoom 2.8 and assuming the compiler requirements weren't bumped drfrag's ZDoom32 to build fairly easily as well. Not that it's hard to build a newer compiler, but I imagine it will take a day or two with a good chance that there will be some build issue. (Which can likely be worked around but when compiles take that long it's extremely annoying.)

Yeah the X-Fi cards aren't really a good choice for Linux. All the downsides of Creative with none of the upsides since even with modern kernels the X-Fi support is basic (no support for the MIDI synths, and IIRC no hardware mixing either). Getting an Audigy 2 in there would probably be interesting since you could run hardware MIDI.

Indeed; my current Mint rig uses an X-Fi but it sounds good enough; I have several Creative soundcards but had stuck with the X-Fi for the day I install Gentoo. However, now I have chocolate-doom working, I'll stick with Lenny and put the audigy or one of the other four I have to try out

As for ZDoom LZDoom and also Woof 64, I'm currently trying to build cmake 2.8.8 as pretty much everything seems to need cmake these days. Oh well, Onwards we go, as they say in Hawkwind

Based on my experience building CMake and GCC for CentOS 5 at work. You should have no issues building up to CMake 3.13 and GCC 9 (RHEL5 went out of extended support before we switched to GCC 10 so not sure if 10 would work or not). I forget at what point CMake switched to C++11, so not sure what the max version you can compile with the out of the box compiler is though. Given that Debian 5 is newer by a few years it's possible you could go beyond that.

Well, ZDoom 2.8.1 is happy to build, mostly, except for tmap.s in sc_man_scanner.h. Is there any way around this, other than ripping code from (presumably) GZDoom?

tmap.s has nothing to do with sc_man_scanner. But it is the only 64 bit assembly file around. You should make sure that in the CMake project you set NO_ASM. A C version of this function exists.