The Still New What Did You Last Do Thread

Just released my second novel! Just one more in the trilogy and I’ll have a series under my belt!

Captain Ventris wrote:Just released my second novel! Just one more in the trilogy and I’ll have a series under my belt!

a couple of days later... 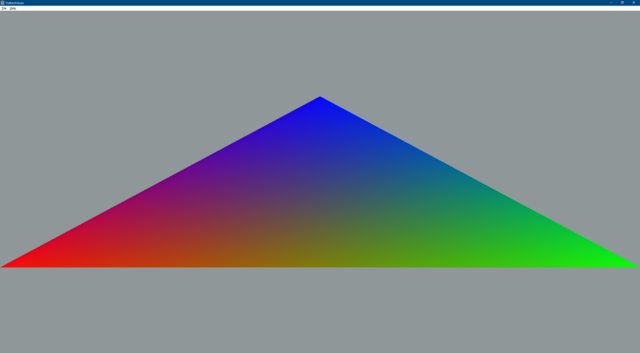 I really need to deal with my distracted problem, because I started this near the beginning of this year, and now here I am, drawing my first ever Vulkan triangle. cloc clocks in at 1828 lines of code:

It's probably inflated compared to many demos since it has a lot of provisions for future work. I also wrote the WSI code myself to get a feel for it (though I just cheaped out and used Visual Studio's template Win32 project to start) I also didn't do the usual scheme of hardcoding vertex positions in the vertex shader that a lot of tutorials do for their first ever triangle, I went the full mile and added vertex attributes and got a buffer backed with GPU memory to act as the vertex buffer, so it's also colorful.

There's a lot of stuff I still find confusing or weird, like why are viewports part of the pipeline object? It's fine for simple things that use 1 or 2 I guess but this seems like a galactic pain in the ass for anything that needs to manage tons of them, or why do you need ot specify redundant blend attachments that must be identical if you're not using multiblend (but then again I'm also only using one attachment so it doesn't matter..)

This part is optional. You can specify the viewport to be dynamic and then it works the same way as with OpenGL: use vkCmdViewport to set it before drawing.

As for why, this is all part of the idea that if an engine described the full steps for drawing and postprocessing the scene in one big renderpass then the drivers theoretically could do better optimizations. By knowing the viewport is fixed it can know up front which tiles the pass applies to. I honestly wonder if any driver actually does anything like this because when something is too much of a PITA to set up engines tends to simply just not do it. And when none of the engines do it, then the drivers won't optimize for it either. All part of that story of going super low level in all the wrong ways.

Wenas. Today i've tried my old pentium 90 and i didn't remember it was that slow, the hard disk is noisy and scratchy and very slow, i had the Win98 desktop at 256 colors due to the low refresh rate of the trident card. ZDoom 2.2.0 runs at 25 fps @320x200. Quake runs at 15 fps at the same resolution, that cpu was supposed to be a calculating beast back in the day. No way Quake could be playable on a 100 Mhz 486 or even a 60 Mhz pentium.

15 FPS at 320x200 wasn't out of the ordinary back then. I think a lot of people forget that during that era it was fairly typical for 3D games like this to run at 10-15 FPS, maybe 20 if you had the absolute top of the line machine, fast VGA, and so on (though the hardware abstraction layers with Quake running under Windows are probably not helping at all). I put a default cap of 30 FPS in Chocolate Descent since the nature of that project means I can't interfere with the framerate-dependent gameplay mechanics, but 30 was chosen mostly to keep things somewhat playable from the perspective of currentyear, and absolutely not an attempt to emulate what someone playing the game in 1995 would have experienced.

Clearly the minimum requirements were a joke, the game came out in 1996 so no way it could run very fast there. I know it runs well with a faster pentium or a 3dfx card.
BTW i remember that ZDoom 2.8.1 was even slower than 2.2.0.

I'm pretty sure that Quake ran at more than 15 fps on a Pentium 90 back then. Are you sure it isn't caused by the trident card? Having the right card could make a huge difference on performance back then. You're right that Quake was unplayable on a 486 though - I had a 66mhz 486 and I launched Quake only once on it.

I executed timerefresh under windows at the start, i should check again on dos. The trident card was crappy but fast @320x200, the pci graphics card made no difference at that resolution for Quake.
There were faster cards sure but it was not that bad, however on a s3 trio on another machine i had a higher refresh rate with more colors.
It's the trident tgui9440agi (90 fps @320x240 there).
http://vgamuseum.info/images/vlask/bench/quake320.png

Notice on that link how big a difference there is between using a Matrox Millenium (a typical card a high-end gamer would have at that time, which were the only types of people that could afford a Pentium 90 at launch of Quake) and that Trident. 155 fps vs 90 fps is a 72% performance improvement. My experience back in those days was that those kind of speed differences also applied at the lower frame rates you had on 486 and early Pentiums.

Also, you're doing this from Windows 95/98's dos prompt? No wonder it all runs horrible then. Nobody serious would play a DOS game from within Windows.

Yeah but that was on an athlon xp, here's another one on a pentium 100.
https://thandor.net/benchmark/33
My card is faster than the 9420. I really should run a timedemo on pure dos. Not that i really care about performance, else i would use a faster pentium.

I've done it, i get 19.6 fps. And 17 with timerefresh. The pentium 90 had also a slower bus and pci besides it's a pcchips board but with a cache module.
So yeah it's slow but for retro slow is good. xD

OG Pentiums are more sensitive regarding cache, and even a fake-cache PCCHIPS i486DX4-100 will run circles around an "equivalent" Pentium 75 with poor or no cache at Quake (with a PCI video card such as an S3 Trio64, which would roughly be equal footing video-wise with common P75 systems at the time.)

I've certainly completed Quake on an AM5x86 (actually a 486) in the day. Being perfectly content with 13-20fps was not a shameful thing with games that pushed the tech. What usually thrashes more on a 486 than a Pentium are dynamic light updates as it constantly updates a luxel-filtered surface cache. Having tighter memory timing's a big factor too. Shoving a Voodoo2 in to GLQuake around the software chokes is actually beneficial and helps the 486 achieve 22+.

Mine has a PB cache module. But may be the bios settings are not optimal as the board now has no battery. Or may be the ram in the graphics card is slow. I dunno.
May be i even put FPM ram there not sure. xD Now that i think of it most likely, it's also my oldest socket 7 board, it's the m520. I'd find an UMC or Opti board more interesting.
BTW i've found i own an alliance promotion at25, is it any good? Is it really an at3D?

How much ram's on the system? Most old Socket7 boards' chipsets don't cache when there's more than 64MB.

(some of 1999's aggressive memory mainstream marketing must have struck disappointment...)