This is a homage to "Young Frankenstein" https://en.wikipedia.org/wiki/Young_Frankenstein, directed by Mel Brooks, so first credits go there.
Great Movie, feat. Gene Wilder and Marty Feldman, if you havent watched it yet, I would strongly suggest to do so

Note: All this changes (except the textures for now) are done on the fly. Load up any map and the modifications will be applied.
Depending on used wad and textures, result may vary. The grayscaling of textures will ony work if DOOM IWAD (Doom, Doom2, TNT, Plutonia, Nrftl) textures are used.
Custom maps using these textures will also fully work. 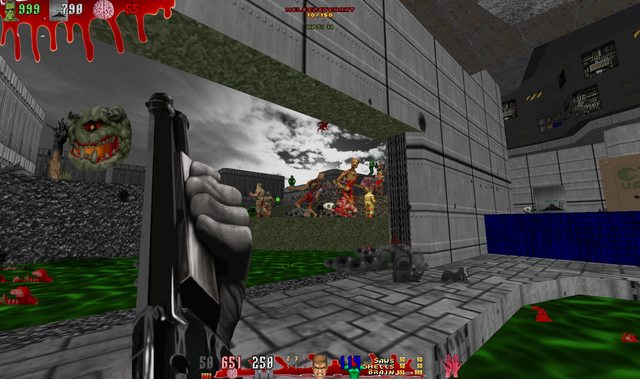 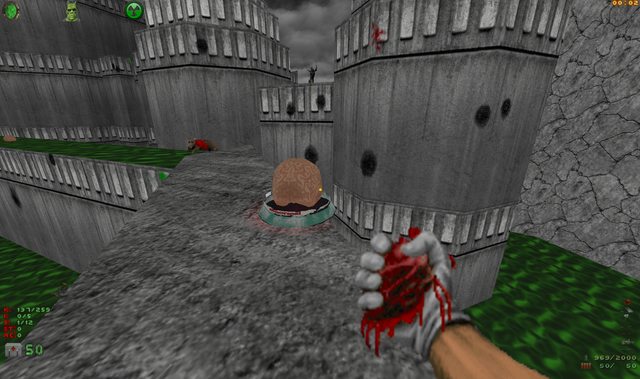 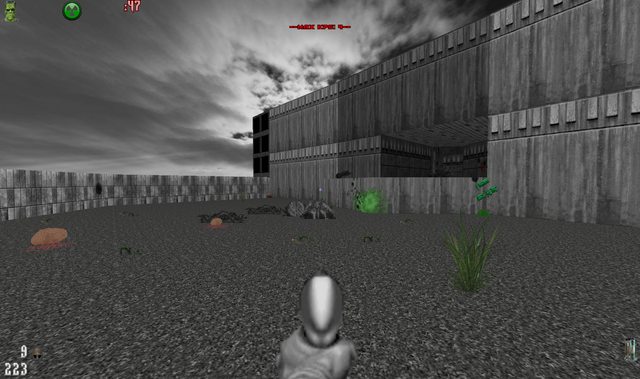 Spoiler:
No rest for the living: Level01 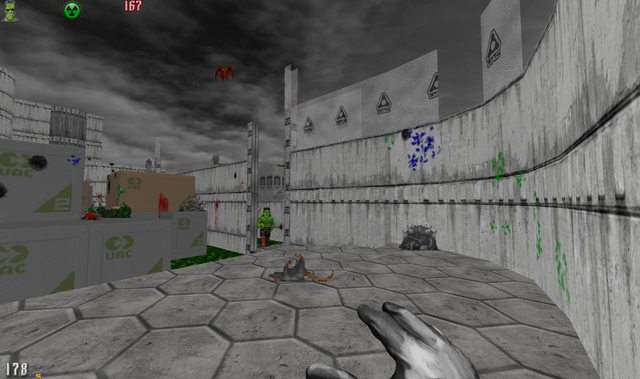 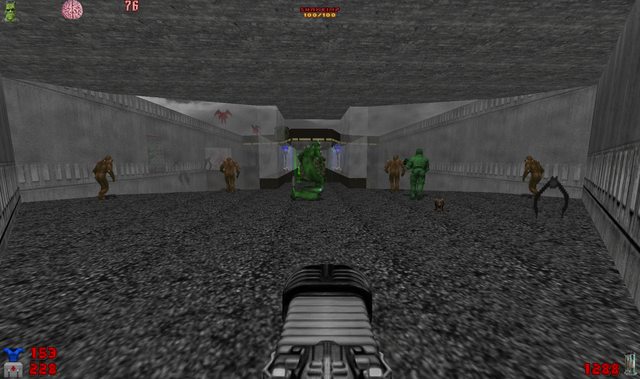 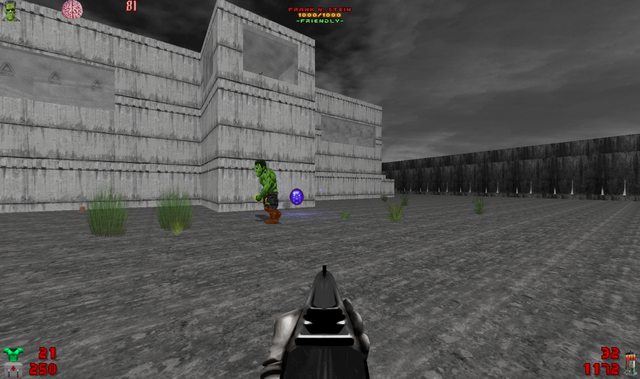 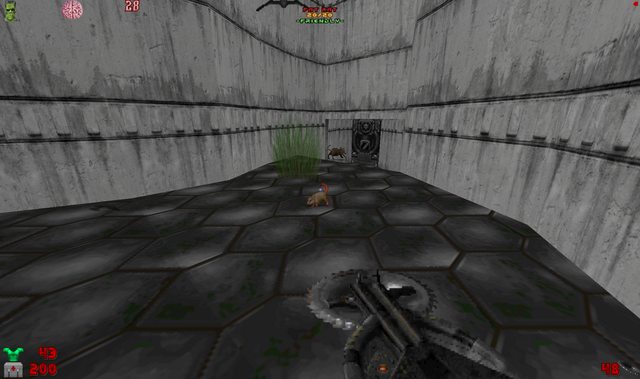 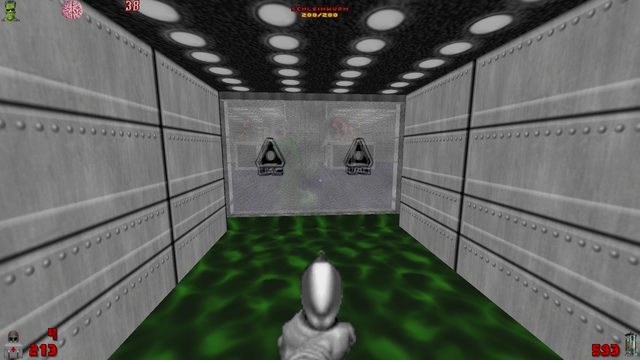 Story:
(I know what a wise man once said about stories in video games, but I dont care)
You are Fritz Frankenstein, Grandson of Frederic Frankenstein ("Fronkensteen") who was the Grandson of Viktor Frankenstein.
While working for the UAC, something went terribly wrong (SURPRISE!). Mutated Monsters broke out and the BrainBlob escaped.
BAD NEWS!

Gameplay:
Your Job is to clean up the Castle and kill a certain amount of Monsters. You cant exit the Map before your Job is done.
Collect abnormal Brains and squeeze them to extract Ammo (Gamma) for your new Weapons.
Frank N. Stein is your Companion. Use his Heart (Franks Herz) to summon him or order him to attack foes.

Spoiler:
Franks Herz:
Fire: TeleportFrank to your Location
AltFire: Point at an Eneny to make Frank attack that foe. Bonus: Aggro is redirected and the Enemy will stop attacking YOU!
Point somewhere else and ...I wont spoiler that

---
Knochensäge: Was used in the past to cut up corpses. Now it is a weapon.
Fire: Throw Blade
AltFire: Chainsaw Mode-doesnt need Ammo
---
Transplantierte Hände (Fists)
Fire/Altfire: Awesome Damage+Selfheal+generates Ammo. Blows away enemies. Be careful, this is one of the few possibilities to kill Frank!
Use it when your Health gets low. Only works with full powers if you collected enough brains. Fallback: Normal Punch.
---
Strahlenpistole (Raygun)
Your first Weapon. Pretty nice damage, low Ammo Consumption.
Fire: Rays!
AltFire: Railgun Mode. Not like a "real" Railgun, but very usefull.
--
Gewehre(Shotguns):
Gewehr (Shotgun):
Supergewehr (Supershotgun-You cant replace the best Weapon ever made in a Video Game!):
Fire: Shoots empowered bullet(s).
AltFire: Like you know it. But a bit faster.
Note: The AltFire mode works in a reversed way. Target further away = bigger damage.
---
PlasmaKanone (PlasmaRifle):
-Fire: Big green PlasmaBalls!
-AltFire: Plasma Grenades! Nice bouncing, good damage.
---
Schienenkanone (RailGun)
Its not just a Railgun, its a Double Railgun!
Fast shooting, but eating up Ammo very quickly.
AltFire: Single Shot to save Ammo.
---
Gammawerfer (GammaLauncher)
Fire: Big, evil Shards of destruction. Pops some AOE Balls on explosion: Damage to Monsters, Heal for you!
AltFire: Homing missile.
--
Dicke Bertha (BFG)
Big Bam.

There are more nice effects of the Weapons, like AoE Damage.

HUD
From left to right (upper left corner) Frank N. Stein
The latest Creation of Doc Frankenstein is your strongest Weapon. Use Franks Herz -bound to "0" and point at an Enemy to make him attack that foe. Nice: Aggro is redirected, so the enemy will stop attacking you and go after Frank.
Fritz Frankenstein used an abnormal Brain for Frank, so you will have to use Franks Heart from Time to Time.
Frank has 3 different Attacks, he can take out bad guys pretty fast.
More Abilities of Frank:
Monsterhaut: Every time Frank gets hurt, he heals himself. Stay close to Frank and he will heal you too! (and supply you with Ammo). He is pretty hard to kill and you want to avoid that. Believe me, his Ghost is very annoying...
Zweite Chance: Your life saver: Instead of dying, Frank sacrifices himself to give a you second chance. It only works once per Map and your next death is for real.
If Frank is dead, Zweite Chance will call some empowered Pinkies to help you out.
MonsterAura: Frank has a healing Aura. Stay close to Frank and he will heal you and give you some Ammo at the same time.

Ammo Types
Saws: For Knochensaege (AltFire Doesnt need Blades)
Shells: For Shotguns AltFire
Gamma: Exttracted from Brains, used by every Weapons.
Where do you get Ammo?
Brains are spread all over the map and: Monsters drop their brains on death. Makes sense!

Enemies
Mutated Monsters, Variations of known DOOM Monsters and some unknown creatures.
The Majority of the Monsters can be taken out easily, a few like the Deep One are harder. So take care.
BrainBlob: This one is evil. Will turn the Ground into a poison mess and revive Corpses.
Gimp: Flying monster, drops bombs that have the same Effect like the BrainBlob.

Items:
-Red Gloves: Teleport back to start point. Good for emergency actions. Kinda "Oh sh*t" button.
-Green Gloves: Teleport to exit. Will given to you if you use exit switch and havent kill enough monsters yet. Head back, kill more monsters and use the green gloves to teleport to level exit. Very convenient!
-White Gloves: Fly for a limited time.

DOWNLOAD Latest Version
You need latest GZDOOM and a DOOM wad, no maps are included. Tested with common wads like DOOM1, DOOM2, TNT, Plutonia, No rest for the living.
Please update wads to latest version, so fixes for missing textures etc can be applied by this mod.
https://drive.google.com/file/d/1dF-O7c ... sp=sharing

Spoiler:
Will there be any maps for this mod?
-There are tons of maps out there. The automatic modification works well on many or most of them.
There are no Stimpacks/Medkits
-Yes, They are replaced with brains. You get heal from Franks Aura or from killing monsters. Another option is to use your Fists.
Why not completly gray?
-I played around with different styles like sepia or screen tinting-it doesnt look as good. Its very gray and you get the colors from monsters, weapon and lights and liquids.
I shot that window and jumped out. Clearly I am not suppodes to be here. How can I get back?
-Use double jump. Pushes you pretty high enough for all areas I tested, like E1M1, E1M2 or use one of the gloves to teleport.
I cant exit the map!
-You have to kill a certain amount of monsters. If you have trouble finding them, search for secrets, collect armor and keys, this items will sometimes trigger doors to open (Doom2: Map03) etc.
I dont need any keys anymore. Locked Doors are breakable glas doors now.
-Key hunting isnt your primary goal any more. Kill MONSTERS and stay alive!

Spoiler:
Special thanks to many members of the Doom community who keep on pushing out new stuff, making mods like this one possible
Full list of credits can be found in the pk3. Full wads with Info file are included. Wads are not modified.
To name a few:
Monsters: From realm667. Full wads with info included.
Textures: DHTP, resized and grayscaled.https://github.com/KuriKai/DHTP
Weapons: Realm667, DHTP, Rogue Entertainment, ID Software
Scouter Widget based on EnemyScouterThing: https://github.com/BLOODWOLF333/Brutal- ... COUTER.txt
Imp based on Heretic Imp by Raven Software
Double Jump lib by Agent ME
BrainBlob based on Pustule by Captain Toenail
Deep One by Dr. Doctor https://www.realm667.com/index.php/en/b ... ne#preview
"Young Frankenstein" by Mel Brooks: https://en.wikipedia.org/wiki/Young_Frankenstein, 20th Century Fox
Brains based on in a jar: Mad Lobster: https://sketchfab.com/3d-models/brain-i ... d4f563ab90, https://creativecommons.org/licenses/by/4.0/

Finally
There is so much stuff in this mod. I need to write a novel like Mary Shelley to describe it all.
If you like a bit of (brain) challenge: Just try it.
There are only a few options to configure. Feel free to post any suggestions. 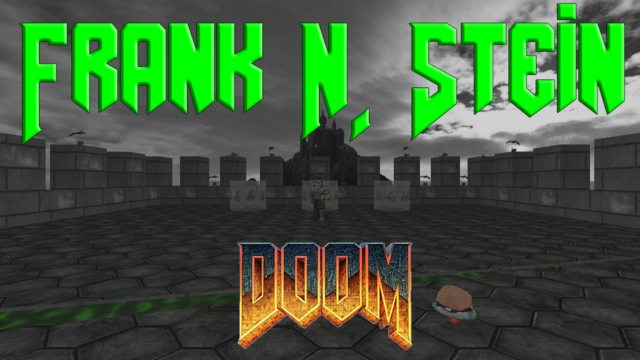 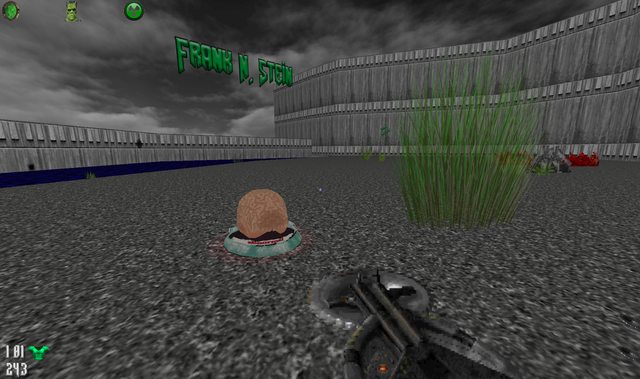 Re: Frank N. Stein - It's Fronkensteen![MultiMod]

Re: Frank N. Stein - It's Fronkensteen![MultiMod]