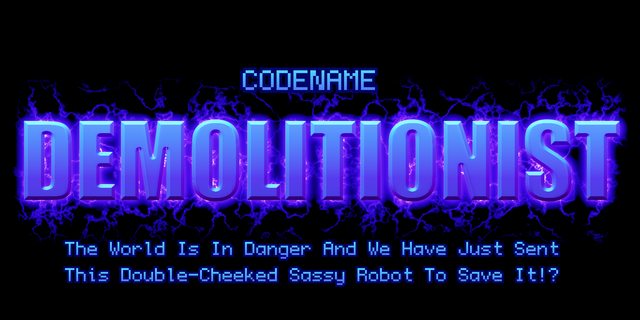 Codename: Demolitionist, or simply just Demolitionist or "the Demolitionist mod" (whichever you prefer) is how it'll be known from now on, mostly due to the fact it's clearly outgrown being just "some weird weapons mod", and to highlight the true star of the show: The mod's protagonist. This also keeps it consistent with the naming scheme of other character-focused gameplay mods (e.g.: Guncaster, Trailblazer, and such), as well as the planned side mods.

Also, the new logo and branding changes took some effort, so there's that too, don't want that hard work to go to waste.

Will the filename change too? Or just the title to everything?
Top

Just the title. Changing the internal names would be too much work, and also pointless.
Top

I don't think I'll be able to even finish any of this music I tried to set myself on for this mod, everything going on right now pretty much destroyed all my motivation and willpower unfortunately...
Top

So, the one weapon type missing from this mod is some manner of rapid fire weapon. You could argue that the akimbo Explodium Pistols are supposed to fill that role, but I don't think they really fit.

What do I suggest? Well, considering how powerful the rest of this mod's armory is, just give her a modified M2 Browning. Have a replaceable 100 round belt box on the side of the gun, and offer different ammo belt options with different ammo mixes. Say, regular FMJ, tracers, incendiary, armor-piercing, some wild exotic stuff you'll come up with. Maybe use a system similar to the Wallbuster to allow players to set their ammo mix, perhaps with certain predefined mixes if the player has the appropriate bullets on their person.

Or you could always go with some massive gatling cannon, if that's what you'd rather. Maybe I'm just biased because of Hearts of Demons: Baron. Heh, I'd kinda like to see the M2 with a fitted scope so the player could use it as a marksman weapon.
Top

Current lineup of the DLC weaponset:
- 1. Itamex Reinforced Hammer (it's a sledgehammer, what else can I say, go bash some skulls with this, also it's affected by the Ragekit)
- 2. Plasma Blaster (Pew pew face-melting balls of hurt, can be charged, can also be dual-wielded)
- 3. Puntzer Beta (Top-break revolver nailgun with a rapid fire mode, Demo can spin it even harder than the Explodium Gun)
- 4. Puntzer Gamma (Bastard child of a P90 and a nailgun, with fuller auto because of course, fun times will be had)
- 5. Sheen HMG (A heavy mah-sheen gahn, fires 14.5mm thicc boolets at either 700, 1050 or 2100 RPM, doesn't need to reload due to self-feeding from Hammerspace)
- 6. Quadravol (Thicc fireball launcher with very spiky parts at the front so you can impale and toast losers at the same time, pump to strengthen the shots, but watch out for overcharge)
- 7. Blackfire Igniter (Schutt cold fire that casts shadow, makes popsicles, altfire supercools air into impaling icy spears)
- 8. Rail Carbine (Thunderbuster on steroids, can do chain-lightning, fries stuff real good but requires a steady charge, tube fed bolt action just for funsies)
- 9. Ray-Khom (Plasma grenade launcher, very silent, supposedly a "light sidearm", somehow)
- 0. Grand Lance (So, you know what a rail gun is, right? Like the actual IRL concept, I mean, not stuff like Quake 2's... yeah)

And the second DLC weaponset:
- 1. Hand of Divine (A big fuckoff magic gauntlet that imitates your movements, you can launch punches and slaps with it, also affected by Ragekit)
- 7. Sparkster Rifle (So basically we took the Biospark Carbine and turned it into man-portable plasma artillery)
- 9. Mortal Rifle (A battle rifle designed by reality benders, what could go wrong?)
- 0. Rafan-Kos (So, do you know what a Master Spark is?)

Ah, I see. I was hoping for something that could take advantage of having multiple ammo types, but I see you've already got your own ideas.
Top

Honestly, as exciting of an idea as multiple ammo types was when it all began, I found on the long run that it can add a lot of unwanted complexity to the gameplay, so that's been toned down over time. Doubt I'll do it much in future projects, either.
Top

Disregarding above explanation, my idea of rapid fire weapon is;
Arms mounted minigun, each arm can fire 50 bullets each second, it also has auto tracking system. Deals one damage each bullet though. It's also a starter weapon.
Top

Considering even the most basic of zombies have 20HP each, with anything higher going up to 100s, that sounds like a rather terrible weapon to use compared to Demo's Explodium.
Also, yeah. Best to save the suggestions, 'cause Mari's clearly got stuff in mind.
Top

OK you know what, since 1.2 is taking so long might as well actually fix the broken logo shader.

Apologies to all non-NVIDIA GPU users for the delay. Now, I better get back to work.

Edit: I also had to push 1.1.46 because of some code that was written improperly and caused recent GZDoom devbuilds to crash.
Last edited by Marisa the Magician on Sun Feb 13, 2022 6:30 pm, edited 2 times in total.
Top

Oh... I have a little question... Sorry if it was asked recently...
Any news about standalone versions of your nice & dope enemy HP bars and damage numbers?
I like "Target Spy" and "DamNums", but sometimes I wanna some variation and you done these things very well.
Top

Is there a way to extract the minimap?
It's the best one I have seen so far and I wish I could try it on other mods.
Thanks
Top
492 posts