Requests go in THIS forum!
Forum rules
The Projects forums are only for projects. If you are asking questions about a project, either find that project's thread, or start a thread in the General section instead.

Does anyone have a good fish sprite set, or would anyone be willing to improve the following?

Originally I was using the Exhumed/Powerslave one that has been seen in 1001 Doom mods, but I think it looks a bit goofy and too much designed to look scary.

(Over-sized pointy teeth etc - too much like a deep ocean angler fish or something.)


I'm looking for something a bit more realistic than that, but still with a vicious kind of look to it.

I have Frankensprited something based on this one:

I'm not sure where it came from (Castlevania?) and it's not bad but I can't really get it to look Doomy enough style-wise when I see it in game.
Here is my attempt: 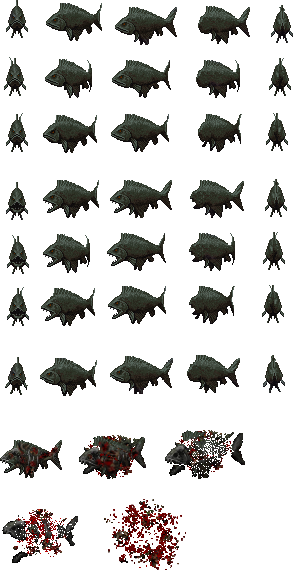 The 2/8 and 4/6 angles could do with a bit of shortening - they look too much like the 3/7 angles. The pain sprites are probably a bit too subtle (just slightly rotated versions of swimming sprites).
When it dies, I just want it to disintegrate and disappear - which is why the death sequence looks like that. I do not need it to be in the Doom palette.
I darkened it because the original colours looked far too bright in game. This has helped, but It's still not right.

So, does anyone have anything better, or fancy tidying and Doomifying my attempt a bit more?
Top

I seem to have good news and bad news for you.

The good news is: I do have about 3-4 sprite sheets of fish. I don't know where did I put them (it is likely that my life-long friend Zsole has them), but they do exist, that is 100%. A few sea and lake levels, such as Sink or swim and Liability Eliminationz will feature them as scenery.

The bad news is: They're all unpaletted PNG, so they yet to be Doomified. Also, they have no attack or dying frames, since we never desired them to be and to count as enemies, and they were meant to be splatted like Duke Nukem 3D sharks).
Top

How about the one from Shadow Caster
https://www.spriters-resource.com/fullview/35618/

I can't see it too well on my phone right now but it does look like a possibility. I'll check it properly later.

Reactor, if you have anything that you feel can be shared, I'd be interested in that too. If I have more than one type, I could happily spawn them via a randomiser. Having a few species would be quite cool actually.

looks like you got lucky. Zsole found two of the fish, I fixed together the sprite-sheet. I dunno what kind of fish they are, probably freshwater ones. A pike and um...a bluegill, perhaps. They have no attack or dying frames, but I certainly hope y'can still find some use for them.
You do not have the required permissions to view the files attached to this post.
Top

Thank you very much. It'll be interesting to see how they look in game. They look like they might be quite bright, but I can probably sort that out quite easily. The bluegill(?) is lit in a way that makes it look like it must be swimming quite near the surface, but perhaps toning down the contrast when darkening it will address that.

The Shadowcaster "killer trout" is proving more difficult to recolour than I expected (because it is so dark and with very little colour variation - an nearly all dark blue sprite is tough to work with) but I'll try to keep going with it because it is pretty close to what I originally had in mind art-style-wise.
Top

All right, we have found the other two fish as well. The bottom one was supposed to be tuna. As for the top one, it's probably some kind of saltwater small fish. But I guess it won't really matter for gamers, they don't seem to care whether or not a fish is freshwater or saltwater-bound

As for the lighting, yes, they were meant to appear in well-lit waters, like a pond, or maybe a fountain. Dark, watery locations will be usually limited to industrial, sewer etc. areas. Fish don't like that

Actually, making a death animation for them is pretty easy. Rotate a few sprites slowly upside-down and let the carcass float to the surface (if it's possible by coding).
You do not have the required permissions to view the files attached to this post.
Top

The lighting won't be an issue. I will either use them in well lit areas or darken them myself. Some of the older maps that I plan on using had fish relegated to pipes and caves because I didn't have a good way of keeping them under water when I first made the maps. The fish in those maps were basically just floating monsters, so if they were able to get to the water surface, they could just keep floating upwards and out of the water. I have a good ZScript version (mostly done by AFADoomer) that handles this properly now, so there is less need to trap them in pipes/caves.
Top

LOL, I envisioned the look on your face when you compiled the code, did a test run on the level, and witnessed the fish just float out of the water and hover in thin air

Guess it CAN be plausible with a pufferfish tho...

We don't really have more fish currently, but of course, if you do need more, we could probably churn out a few for ya

in case you need model-fish, you might utilize the Barracudas from Quake 2, or the small fish and that whale-thingy from Red Faction which shoots sonic booms at you. The leeches from Half-life could also make great electric eels with a little tinkering.
Top
9 posts • Page 1 of 1