Spoiler: Flavor text inside!
It's 5 A.M., cloudy and threatening to rain as you drive down the desert highway, your ancient truck's engine furious about how long it's been driven. You aren't looking forward to going back to work after a time away from the big city, but this might just give you an excuse to put it off.

And then it gives up - not just quits, but a blast of fire shoots from the gaps in the hood. You didn't know it was even possible for an engine to fail like that. Extended vacation it is, then. You debate how long of a walk it might be to find the nearest payphone so you don't get fired, as you slowly roll to a stop.

... In front of a large structure. Hm. Maybe they have a phone?

You climb out of the truck, but pause. There's a tingle in the air, and you feel like you're being watched. If the corps taught you anything, it was to never, ever, ignore that feeling. At the edge of perception, you swear you hear a distant, howling scream. You can smell cooked meat and ozone.

You turn back and take your sidearm and a few magazines out of the glovebox.

Hooray! It's now downloadabable!
Currently contains MAP01 to MAP09, but more to follow in the future.

Check it out now on its itch.io page!!

Squenched Avacausage (you heard me) started as a bit of an intellectual offshoot from my main TC/game project. In the process of developing that, I started also developing a severe mapping itch - but the gameplay elements there aren't yet far enough along enough to really start, so I started getting ideas for Doom coming to mind. Plus, I figured it would be some good practice for broader level design principles (for a game with a pre-established gameplay formula) for when I come back to that, as well.

The final push I needed in particular was being introduced to Going Down by Cyriak, via Decino's youtube channel. After playing through it, something about the off-kilter nature and wild pace of GD really lit a fire in my brain and I could hardly say no to those urges.

It's really been too long. This is the first time I've touched Doom mapping since 2019 when I made a pair of very boring speedmaps for Doom 1, and probably committed innumerable clueless mapping sins in the process. But, this time, I really tried to take it seriously - actually doing newfangled things like thinking about enemy encounters and how they work together... So, in that sense, I consider this my first "real" doom project. It's built with Boom compatibility in mind and makes extensive use of its features, but is of course fully playable in gzdoom. I have been really enjoying working out voodoo doll logic and other such hooey.

After all that, though, I have... no idea what I've created. I wanted to do my best to make something distinct and different but still fun and challenging, and I think I just might have got there in the end.

In general, the gameplay style revolves around tight quarters and dense, frantic combat. Not a slaughter map, but there are some pretty dense mosh pits going on in spots. It gives me quite a bit of trouble when playing it, but I deliberately tried to keep it above my own skill ceiling (which isn't that high). Aesthetically speaking, I have no idea. I have channeled my latent surrealist tendencies, which has been quite enjoyable. And my dumb sense of humor. I've tried to keep something of a "period-accurate" level of detail for a passion project of perhaps the 1997-1999 range, with a mixture of stock and custom textures. I can guarantee it is not going to be everyone's cup of tea. Sorry, I guess?

So far, the wad consists of a single, large level. It's taken between 30 and 40 or so minutes to play, which was not my intent at all. It just kind of happened. Needless to say I will be more careful next time. Indeed, if/when I expand the project (I sure would like to), this map will likely be a sort of prolonged intro
sequence followed by a large number of smaller maps.

So, as for releasing it, I am still working out the best way shape and form to do that. I haven't really released any doom levels before so I am still kinda figuring out the protocol. It's Damn Close to being ready for a first-level-only release, just trying to get some preliminary feedback from a few people I've forced to play it. And I need to get some appropriate music for the level (currently using a midi rendition of Take Five by Dave Brubeck... because I'm me). Oh yeah, and working out other difficulty levels. Uhhh what else... tested primarily in PrBoom+ with complevel 9, works fine in gzdoom 4.x.x and probably older, it's not going anything particularly exotic.

Anyway, pictures! They have deliberately been taken with monsters disabled so as to disallow any sneaky pre-planning to be done. 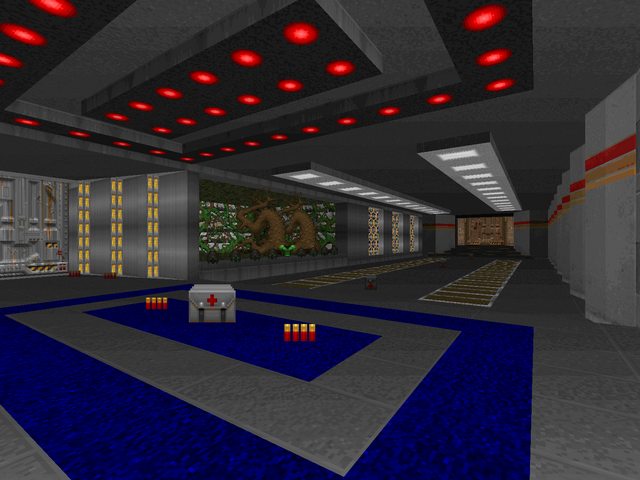 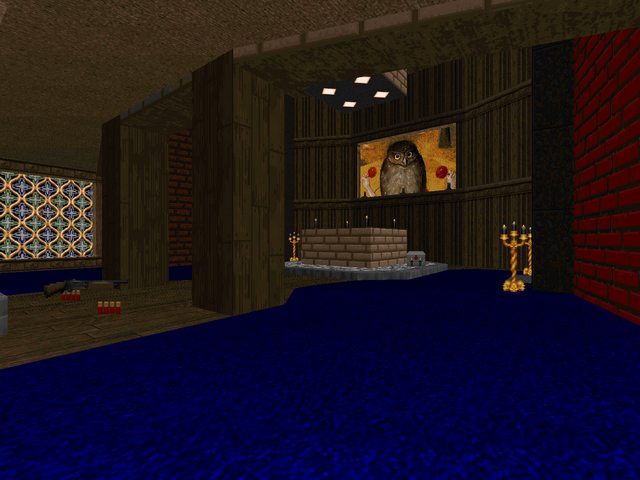 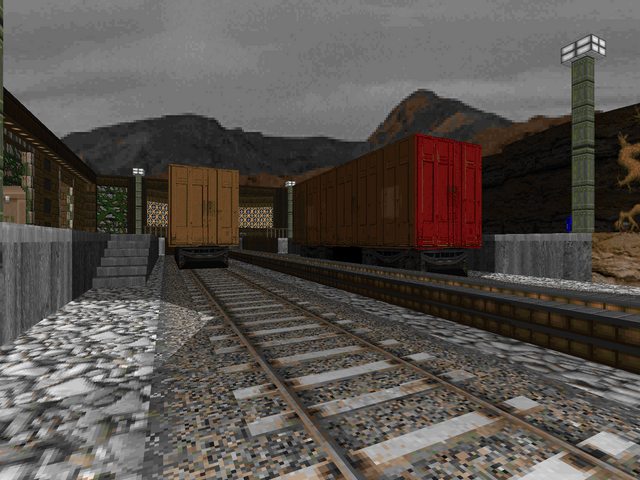 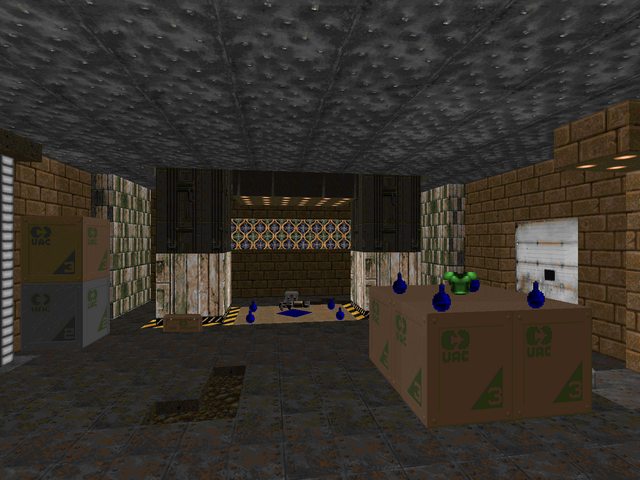 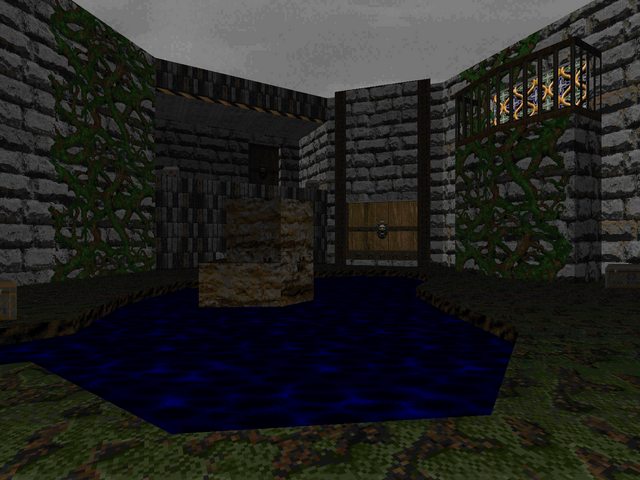 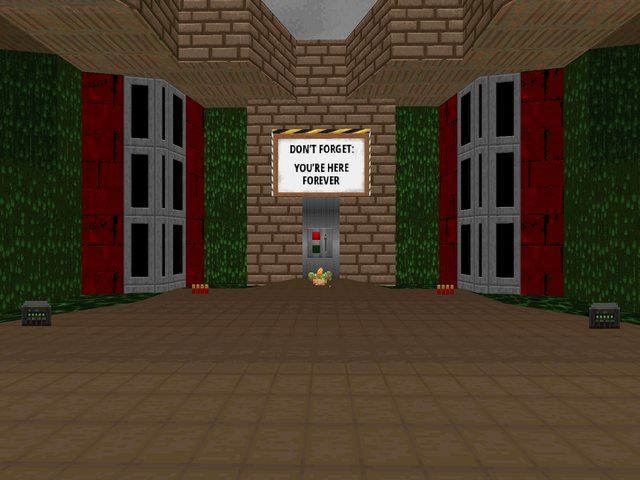 But enough rambling, I am sure you are wondering - what IS a squenched avacausage?

That knowledge is but one part of your journey of self discovery.

Definitely looks interesting. Looking forward to playing it once you have the release figured out.
Top

My bet is that it's also why the facility has been overrun by horrible mutant monsters, presumably the taste-testers.

(Maybe I've been influenced by those Nuka-Cola R&D logs in Fallout 3, though.)
Top

Well, that's what the marketing wing of SquenchCon says. They also say that you should pay no attention to the congressional hearings about this.
Top 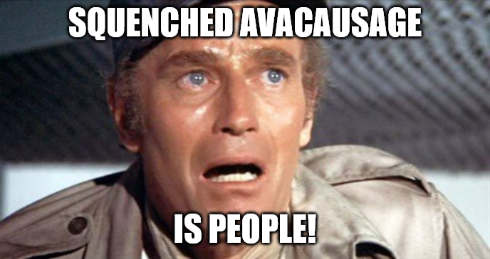 Oh also, I composed my first midi for this project. I've done music composition before but am pretty rusty... always wanted to get into midi stuff though. It's simple, but I'm pleased with it.

I don't expect to be able to do the desired jazz fusion/etc soundtrack for it myself, though. Maybe I'll poke a particular jimmy, although a midi commission is not really the smartest use of my limited resources right now admittedly...
Top

Mm. Still fussing about music. It's kind of the long pole right now. I don't really know what to pick, or where a safe place to grab something temporary at least would be. As mentioned, I really want something a bit jazzy and off-kilter for a strange project like this.
Top

Have you ever played Going Down? Jazzy and off-kilter is a good description. Though it's like 5% jazzy, 95% off-kilter.
Top

Gez wrote:Have you ever played Going Down? Jazzy and off-kilter is a good description. Though it's like 5% jazzy, 95% off-kilter.

As far as taking some music from the soundtrack, I guess that's an option, at least as a placeholder... I know it's a bit of an acquired taste, as much as I love it myself.
Top

Okay! I settled on D_MESSAG2, an unused track from the plutonia midi pack, for my placeholder music. It is suitably weird for my tastes.

I should probably make a thread someplace like doomworld or something sometime, too... admittedly I am kind of intimidated by the larger forums thouh
Top

I am really not sure where would be best to upload it, does anyone have any recommendations?
Top

Lots of people use Mediafire or Dropbox. You can also try ModDB.
Top

Gez wrote:Lots of people use Mediafire or Dropbox. You can also try ModDB.

Yeah I was mostly thinking of places with some sort of landing page. Honestly, maybe itch.io ? I know there's the idgames archive but I dunno, I think I'd rather wait until it's finished for that.
Top

mediafire is a good pick for an unfinished mod in this case, idgames can wait once it's completed.
Top

Okay, after many, many instances of getting sidetracked, I done diddly did the posty thing!

Just went with Itch cause it's nice having a cozy little landing page for it.

Any feedback is appreciated. I have not really been able to get more than one friend to play it yet (I don't know many doom players personally unfortunately), so...
Top
25 posts