Spaceman333 wrote:Would the minigun's explosive rounds still cause self-damage to the player?

no, that would be too annoying imo.

Ok, so the minigun's balance would come from the ammo being rare then? - making the weapon something that you gradually stockpile ammo for and only use as a super attack in desperate situations.

Just thinking about these things because the arsenal is already quite diverse, thought it does feature the assault rifle and smg as full auto bullet projectors - which is what the minigun would sort of be - I'm thinking how the minigun would not to completely overshadow those two weapons without having some sort of drawback.
Top

Sound good, I like the windup time in particular.
Top

This is really cool! I love the feel of this mod.
Top

I like this mod so much I made an unofficial update for it - version 1.6 UF

>> Download at ModDB <<
Overall its slightly easier to kill stuff, though the new recoil mechanics and missile blast radius/homing can surprise. The new reworks for some weapons make them (in my opinion) much more fun to switch to and use more often, like the stun baton/axe, homing missile launcher or the GBE super revolver. More emphasis on cool/fast, less on tactical/slow.

I feel now its exactly the way I always wanted it to be, am very satisfied while I played a few playthroughs with this version.
Top

Thanks for the update. And think i got some more feedback for some weapons and whatnot!

Spoiler:
- First of all, i think Taser Baton needs more firepower especially when i get the Quad Damage. Some Zombiemen take two hits to go down. Fire Axe does its job but not this one though.

- Triple Barrel Coach Gun's firing sound is in my little opinion, it's underwhelming. It's absolutely powerful, but audio is not. Also the sound gets cut off by incoming reloading sound.

- Also would be extra nice if i could Alt-Fire on both Coach Gun and Missile Launcher still with having one or few ammo loaded in case of busy firefight.

- And speaking of Missile Launcher, i don't think i hear the explosion sound effect from its rocket projectile.

- Cryo Launcher makes the kicking electric. I guess it was intentional? Also it alerts enemies.

- Portable Rail Cannon has neat design and is very useful. However, when i zoom with it i can't switch my weapons or reload my gun until i zoom out for some reason. 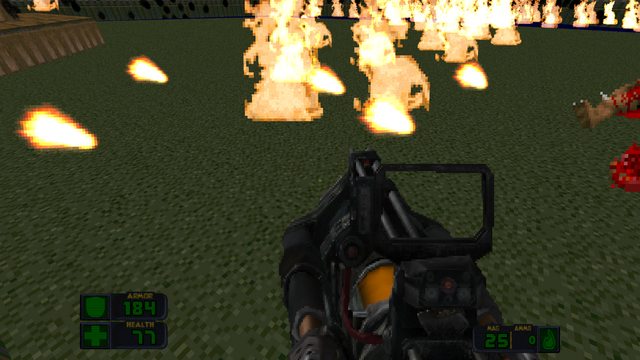 - Napalm Cannon's little projectiles crawl on floor and it's like... Fire worm!

And that's about it. Neat update! You're doing real well.
Top

Sorry for being M.I.A. for so long. I got caught up with some stuff, and forgot to update OA.

Anyways, STUFF THAT CHANGED:
-Incorporated Spaceman333's arsenal changes, with a few tweaks here and there.
-Fixed the Cryothrower's melee shenanigans. That was an accident, The fireworms are a feature, though.
-The Chiappa's primary now fires a double burst and a single barrel shot if you have 2 or 1 shells loaded, respectively.
-The Rocket Launcher's altfire now fires a salvo of rockets regardless of how many you have loaded.
-Buffed the Taser Baton's damage, and fixed a small issue with the swing frames.
-Compiled the health items and powerups into a single, easily removable file. For no particular reason.
-Fixed the Rocket Launcher's explosion sound not playing.
-Fixed the Grenade Launcher's crappy smoke trails.
-The Stealth Rail Cannon can now be reloaded and switched while scoped, for all your quickscoping needs.
-Added a nice lil' M_DOOM texture, for that extra flair.
-Replaced the M60 with the Rotary Siege Cannon. A.K.A, THE GODDAMN MINIGUN. Have fun.
-And any other basic stuff i might've forgotten.

Feel free to shoot any feedback and glitch reports if you got one.

Holding Reload key in any weapon stops it from bobbing. Putting an A_WeaponReady command in the first frame of the reload state might tackle the issue.

Great update, loving it so far

Dr_Cosmobyte wrote:Holding Reload key in any weapon stops it from bobbing. Putting an A_WeaponReady command in the first frame of the reload state might tackle the issue.

Super happy to see a comeback and an update with all those fixes. Gonna play with it as soon as I finish an already existing playthrough I'm doing with the 16 UF version.

The only thing I'd suggest is putting up the weapons list for the first page so that people know what awesome goodies are included in this mod (which are quite significant! - 16 guns!). You can copy paste the one I wrote on the ModDB link (expand the description by click) and plug it into a spoiler in the first post. Thats pretty much the only thing missing there imo.
Top

I don't yet know if this was fixed in the latest update, but the Silenced SMG's casing actors weren't fully deactivating in the previous UF version I'm still on.

I play with IDDT 2x on, so I see all actors on the Automap and by chance noticed that after doing a burst of bullets with said SMG, the casing had visually vanished, but the swathes of actor triangles I had created were still stuck on the map. I think the SMG casing may be missing a 'stop' in the decorate code.

While still finishing up the playthrough I felt like just one weapon function was missing from this mod - an AltFire for the grenade launcher to shoot sticky proximity mines - especially desired for the moments when I know a monster will come out of a closet or a teleport spot, I can place one in advance to blow them up. Making them shootable so I can detonate them with bullets manually would be cool too.

I'll update once I finish and provide more feedback if anything comes up.

Some other personal ideas I had was making the Railgun's projectile go through walls, make the railgun trail emit smoke and have more recoil. Meanwhile making the Autorevolver's projectile even more in-line with the GBE idea (ripper, large projectile radius as an aura to hit more targets even if they're not directly hit, a visual trail of some sort, 50% more damage, bullet goes through walls too, increase knockback to enemies even further). They're a bit extreme changes balance-wise, so I'll probably just implement them to my own private edited version.
Top

Gave the GL a bit of a rework.
Made the explosions and shrapnel more visible, and added a mine altfire (shorter range, non-sticky, shootable, doesn't eject shrapnel. Kinda experimental, may be subject to change.).
Also, fixed the Rail Cannon reloading with full ammo, and the SMG/Pistol casings not disappearing.
Top

LossForWords wrote:Gave the GL a bit of a rework.
Made the explosions and shrapnel more visible, and added a mine altfire (shorter range, non-sticky, shootable, doesn't eject shrapnel. Kinda experimental, may be subject to change.).
Also, fixed the Rail Cannon reloading with full ammo, and the SMG/Pistol casings not disappearing.