Is there something that doesn't work right in the latest GZDoom? Post about it here.

Please make a new topic for every bug. Don't combine multiple bugs into a single topic. Thanks!
160 posts

In this thread please report maps that need a compatibility setting to display properly.

1. Link to the mod (also for 'well known' stuff, please! It's not fun to scan /idgames if you want to do a quick fix.)
2. Map that needs fixing.
3. Position in the map where the glitch can be clearly seen.
Top

Alien Vendetta and Kama Sutra are done. But with Suspended in Dusk I have no idea how to alter those sectors that they don't glitch.
Top

Since 77a4b9a there is a walkthrough blocker in Sin City 2 The Satan Complex.

To avoid changing of established behavior I propose to fix it via compatibility entry.
This was done in this PR. Comments and ideas are welcome.
Top

Deathking MAP41 has a warning message when loaded. This can confuse players. Specifically, line #1023 has its third and fourth parameters set to 64 and 7 respectively, possibly garbage value left from a different special having been tried first. The third parameter isn't a problem because there's no sector tagged 64 in that map anyway, but both could be cleared.

Hello, some time ago I got completely stuck at the exit of Map 13 of PCorf's Community Project, by an unknown reason the switch that had to trigger the explosion of the front view ocean cargo ship and therefore exiting the level (through a Romero Head bomb trap) didn't work at all. I tried it twice in two different gameplays and in both cases I haven't been able to get to Map 14 by the normal way...

It's a pity, because this is one of my all-time favourite megawads... Could you please check it and make a compatibility patch if necessary?

Running GZDoom 3.5.1 with the following command line works for me

Pressing the switch near chaingunners triggered explosion every time I tried. Please check it again and provide a saved game if this will happen again.
Top

Scythe 2, MAP17, Sector displays incorrectly in Hardware Mode (Left of player spawn). May be a bug in the implementation of the hardware renderer (does not occur in GLBoom+ or GZDoom 1.3.7).

Both can be fixed by adding the following to the level_compatability.txt:

The usual suspect, Doom II's own MAP02 and its infamous stuck barrel and shotgunguy (on UV at least).
I'm not on my PC right now so I can't give coordinates.

And Hexen's MAP30: Griffin Chapel. I actually made a thread in General about it a month ago, but got no answers about it since then.
viewtopic.php?f=4&t=62085
Basically, upon entering the map, the console prints that Script 10 is being defined twice. After looking at the ACS source I found that there's indeed a duplicate. Now here's the thing that puzzles (no pun intended) me, if there's duplicate scripts in a case like this, which overwrites which/which one takes priority?

IIRC the next highest number, 11, is not found in the script so I guess Raven's intention was for both scripts to coexist, but they made a typo.
Top

DabbingSquidward wrote:The usual suspect, Doom II's own MAP02 and its infamous stuck barrel and shotgunguy (on UV at least).

I have the feeling there's a reason this hasn't been fixed yet? I seem to recall it's been brought up many many times and always been rejected.

The stuck monster on the barrel has been reported before, I think Graf has said that he will not fix this since it would constitute quite a major gameplay change in that map.

As far as the ACS script error, as far as I know there exist no implementations in GZDoom right now that can fix ACS scripts. That would indeed have to be implemented and someone with the extra time would have to do it.
Top

The compatiblity layer can change map structures, but script errors are completely out of scope.
Regarding MAP02's stuck monster, I do not consider that a deal breaker. It does in no way affect how the map plays. Normally this is reserved for problems arising from changes in the engine that does not allow it to play a map without misbehaving or showing visual glitches. Neither is the case here.
Top

DabbingSquidward wrote:The usual suspect, Doom II's own MAP02 and its infamous stuck barrel and shotgunguy (on UV at least).
I'm not on my PC right now so I can't give coordinates.

As i said before (see link provided) it's actually a bug, the guy was not stuck in v1.7 and earlier. Back in the day i played v1.666 and i was actually surprised to see the guy stuck when i upgraded, it was pretty easy to blow him off BTW.

It's fixed in LZDoom and in my old ports as well.
Top

There are a few places in Doom2 a bit like this where you can see the effects of (I assume) last minute tweaking and inadequate testing either for the initial release or by something getting (accidentally?) moved during the updates. e.g. I'm quite sure that all the enemies up on the platform in the big final room of map01 not being central in their sector is the result of this: 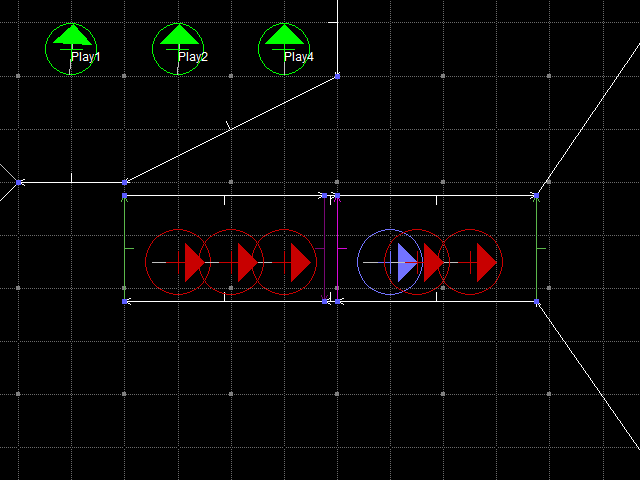 For whatever reason, the entire map was shifted southwest, closer to the 0, 0 coordinate, in version 1.8. As a result of this, some flats became unaligned. The map was shifted again in version 1.9 to fix the flat alignment. Things were also shifted, but not by the same amounts, meaning they have slightly different positions in relation to the map geometry in each version.


Things like the stuck guy in map02 do start to fall under what the "purists" are likely to argue about. "It was released that way, so that's the way it should be" and all that stuff. Not a viewpoint that I particularly hold and this particular one is so obviously wrong/broken (albeit that it doesn't harm completion of the map) that it would be hard to argue that it was meant to be that way, but some people would - perhaps messing up speed runs or something might also be given as a reason (not that GZDoom is particularly a target port for that).
Top

I actually prefer the design where the shotgunner is stuck in the barrel, because it can work as a tutorial. It's the first explosive barrel you encounter in Doom 2, so if you're curious as to what it does, this is a safe environment to experiment with, because the enemy here can't hurt you. Then if you shoot the barrel, you immediately discover that its explosion can kill enemies. The same thing happens if you accidentally shoot the barrel instead of the enemy.