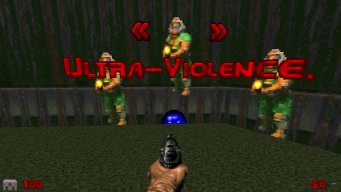 - marking passages in a labyrinth:
- marking visited rooms
- distracting opponents in a deathmatch
- hiding a switch, and printing a fake switch in another place
- coordinating efforts in cooperative game
- using images as personal signatures

Contents: You can load any number of those pk3, they won't interfere. Each pack will have its own set of keys and settings.

Is that possible?
Top

Yes, it should work with every mod.

The only limitation is that it needs Doom2 or Freedoom2 as IWADs.
Top

The only limitation is that it needs Doom2 or Freedoom2 as IWADs.

Can you make a tutorial on how to add custom decals?

Theres a probably a whole wealth of wall spray decals on the internet that are waiting to be used to each of their own preferences. If there was a streamlined way to add, edit or switch the decals easily, in a newbie-friendly way, I'd have a lot of fun adding, painting and sharing decal packs.

I'd personally use the mod in singleplay to mark walls to help navigation and to taunt tough encounters that I survived, with something cheesy like "0wN3D by UAC, sucka!" or "DOOMGUY WAS HERE", to celebrate victories.
Top

I added the tutorial to the mod and to the topic. I'm afraid it is not very streamlined, easy, and newbie-friendly (it requires having an ACS compiler), but it is all I can provide for now.

I myself wanted a way to add sprites without recompiling ACS script, but I currently don't know how.
Top

m8f wrote:I added the tutorial to the mod and to the topic. I'm afraid it is not very streamlined, easy, and newbie-friendly (it requires having an ACS compiler), but it is all I can provide for now.

I myself wanted a way to add sprites without recompiling ACS script, but I currently don't know how.

Excellent, this is sufficient!

Now to find, design and draw some good decals...

For those looking for sprays, here are some gigantic resources:

Use an image editor to resize them to an appropriate scale that looks good in doom (use doom sprites or the example image in this mod as reference) and you can have practically anything from anime characters to memes and other images be used as wall sprays. The possibilities are endless!
Top

looks like we can finally make our own portfolios in Doom.
Top

Each time next or previous is pressed, it would display a quick text using Print or HudMessage saying which spray number and spray name is currently selected.

If possible, another useful option would be to have a expiration time of sprays, defined in seconds.

Also why are animated sprays permanent? Even if I'm not spamming them, it still feels off to have a potential performance overload factor be available like that. It could also be used to grief a multiplayer game, so having them dissappear either after delay or a past a certain number of them would be a good idea.
Top

Already working on it

Spaceman333 wrote: If possible, another useful option would be to have a expiration time of sprays, defined in seconds.

I'm afraid it is not possible because as I know decals in GZDoom do not support timeout. They are affected by Options -> Display Options -> Number of Decals, though.

They are permanent because of the method they are drawn: basically, when you "draw" an animated spray, you plant an invisible actor that constantly shoots special projectiles to a wall. Those projectiles have decals for each animation frame. Older layers of animation will be removed automatically as all other decals, but because new frames are shot, image stays on a wall permanently. So there should be no performance overload.

On the second thought, I can make expiration time for static sprays if I use method similar to animated sprays: shooting actor would "renew" an image until time is out, then image will be removed with other decals. It can be done, but I do not plan implementing it now.
Top