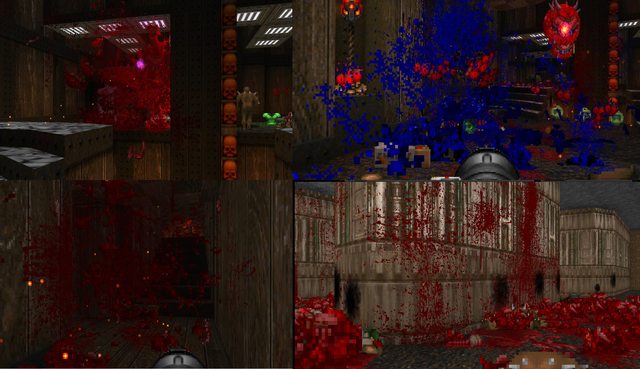 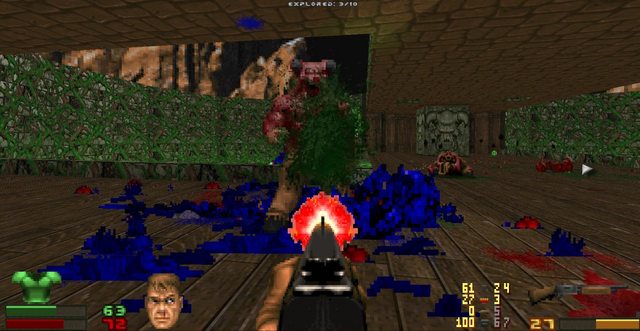 Features:
-Uses Smooth doom additional death animations and new gib effects to work with Bolognese and Nash gibs effect
-All of Nash blood mod features working: Footprint, crush, mirror death, spurts, ect-All of Bolognese features: Blood pools, gore, hit effects, ect
-Most of Smooth Doom gib features: New giblets, new death animations and gib for monsters
-Replaced Smooth Doom's weapons to use PerK's Smooth Weapon Enhanced with better vanilla weapon timing
-Merged Smooth Doom's casings and shells with PerK's weapon animations
-Removed monster smoothing except for death and gore smoothing
-Removed HUD smoothing-Reduced blood and gib volume from Bolognese and Nash
-Re-enabled Bolognese's Green/blue blood and gore-Increased blood pool size
-Created and replaced a few blood decals to better match the different styles of blood mods
-Fixed blood on liquid surfaces not working including blue and green-Increased amount of blood on liquid surfaces
-Option to use Nash, Bolognese, or both for hit effects
-No weapon or monster change version
How to install
Open a folder of version of smoothdoom you like to install Default is with all Smooth Doom Options
while no monster and weapon are used for using with other mods that change those part of the game.

NOTE:if you are trying to use this mods that alter monsters that have different blood color (like in overhaul mods) then you are better using just Nash's gore mod only.

Hi, I don't know if it is just me but the blood colors and door squish and the entire weapons set no longer works. I know I have everything configured right, it just is not working in 4.8.0
Top

Is working for me in 4.8.0. Is there a conflict with another mod you are using?
Top

I use no other mods, the nashgore issue happens with nashgore and bolognese in general so it might be on my end, also I just realised some of the settings are missing for me like the casings option
Top

Ill take a look at it, there probably a set of pk3s in the install that are not properly set.
I don't have casing set as an option anymore mostly because monsters cannot use them anymore. But is always on for player.

EDIT:
Been updated to 2.43
-Fixed default install using incorrect version for Smooth Doom. was using no monsters instead. resulted in wrong blood color, monster and weapon related features not working

Thanks for reporting. I've also updated the instructions for casings as it isn't needed to be set anymore
Top
5 posts • Page 1 of 1