Projects that have specifically been abandoned or considered "dead" get moved here, so people will quit bumping them. If your project has wound up here and it should not be, contact a moderator to have it moved back to the land of the living.
393 posts

ZDL never charged actual money to give out anything. He had a disclaimer that you need to PM him privately requesting anything. You can see all the "thanks" in this thread to verify it.

His Patreon was asking to be compensated for work or "labor" to make things for people, but in the end, he never charged anyways. It was all voluntary.

I think, not sure, he was not a Native English speaker, hence the wording could have been written better.

But I completely agree threatening anyone is a big no. That just cuts off any route of communication and that was bad on his part. He owes the mods an apology for his foolish threats and maybe we as a community need to take a step back and see things from all sides before we pass out judgement.
Top

You might want to read this for the full context.
Top

I'm speaking from experience in talking to ZDL. If anyone had asked him, he did and had given content for free.
Top

I'm new on this forum probably my opinion it's a little matter:

I didn't like either that thing about patreon, but having a look around nowadays lot of people is doing that, I explain:
I downloaded brutal hexen quite easily without paying anything, if something has changed since that I don't know.
If I understood well what happened, in the end he wasn't really sending the WAD wich is obviously copyrighted but a tool to merge the (already owned) two into one in order to make brutal hexen not resetting your stats when you start the expansion, wich is like a "premium" feature of the mod, free version, wich I used, was working good and I was aware of its limitation.
Don't know if it's unlegit to use that tool, maybe I'm wrong.

I know that this wasn't very clear and there was this strange thing about private messages, but probably was just feared about what really happened in the end, but for another reason, He could have explained better this thing out in the open since his patreon was not a secret, he has written about it in most of his topics, don't know if it's against forum rules to ask for patreon support for a feature, I've read them but I could have missed, if there's just reply to me, and the ban could have been right for avoiding it trough private messages.
Probably is none of my business but I would give him a second chance.. as what I could have seen he has always been kind with everybody...

hope I didn't any mistakes.. just my point of view.
Top

Maybe the whole thing about protecting copyrights might be uniquely western, I don't know. But I also understand liability, and getting caught in the crossfire when things get ugly. Something that should be obvious is not among my major interests here or anywhere. I am not aware of a massive difference in Russian law and US law on this issue, but we are in the US, the ZDoom server is in the US, and so are the companies in question. Which makes us very easy to target.

There's also the fact that he admitted in that PM to the user which got reported that he knew he would get banned, which means just a warning at that point would have been pointless. Had he not stated that, it would obviously have been only a warning.

The thing is - offering mod content for games without a license behind a paywall (even if you could just "message" the creator for a free copy, that still doesn't make things better) has long been against the license agreement of said games. And guess what - both Activision and Bethesda (the current rights holders for Heretic/Hexen, for different reasons) are scarily litigious, so I am not going to take the risk. Sorry. Besides - as far as community standards go, it's the right thing to do anyway. Even if it wasn't for the fear of liability, it seems wholly wrong to even entertain this kind of pay scheme, anyhow. Sell your own content? Sure, have at it, knock yourself out. Sell someone else's? Crossed the line, there ... that's fucking dicky as hell.

I would have been just fine with the Patreon page as long as there was no usable content at any of the tiers. I mean someone on Doomworld even spelled it out pretty well for him - exclusive gameplay vids, exclusive behind-the-scenes looks, exclusive coming-up sneak peaks, etc., would have been perfectly acceptable Patreon tiers.
Top

Im very happy, this thread now will stop pop out on my "view your post" list, with every request for MegaWad.
Top

Wow, I haven't really followed this mod at all; but charging anything for mods (even via voluntary Patreon stuff) reminds me of the controversy of Bethesda trying to do it a few years back for Skyrim.

Who would ever think this is a good idea? Why would you ever try to charge for it? Especially risking copyright issues.

Mods are something we should make because we want to create a fun vision of our ideal game and find joy in others sharing the same. Anything else strikes me as blue-orange morality, and I'm not exactly a lover of capitalism in the first place.
Top

No one should ever have to pay for a mod, pay for access to view one, monentarily subscribe to view copyrighted material, or accept payments for any work on a mod. Refuse, always refuse. You dont want to get yourself in legal trouble.
Top

So after all that, ZDL is no more accessible to the forum... What now? Is this project really dead? Or we still can discuss with the mod?
Top

Captain J wrote:...Or we still can discuss with the mod?

I dl BrutalHexen yesterday to check progress since 2019

Lagi wrote: interesting thing is, mage class is unfinished. weapon 2 has kick instead taser, which grant 5 hp bonus (instead 1) on finishers. And the flashette is behave differently, which is interesting. Mage can either throw explosive or poison gas. ...

on the right there is flachette poison effect when you use NOT-sapphire wand weapon. On the left if flashette fire effect with sapphire weapon. 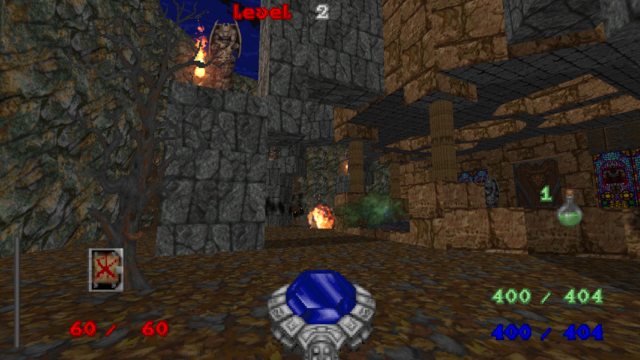 ... well it was jarring for me even back then, when i first time play modded doom-esque game.

sapphire wand new projectile effect looks nice. im super glad the shield bash and kick no longer deal damage to the player, so all the passangers of the BrutalDoom hype-train will suffer a little less trauma.
Top

Not surprising this user has a patreon, everyone is doing that these days. I don't recall this MOD ever being a paywall, and even though the last version was almost 2 years ago, the author has been working on it giving progress reports.
Top

Valherran wrote:Not surprising this user has a patreon, everyone is doing that these days. I don't recall this MOD ever being a paywall, and even though the last version was almost 2 years ago, the author has been working on it giving progress reports.

Again, as I understand it, it was never the mod itself behind the wall. It's the "megawad" he was distributing, that was Hexen plus the expansion merged into what I believe is a complete IWAD.
Top

wildweasel wrote:..
Again, as I understand it, it was never the mod itself behind the wall. It's the "megawad" he was distributing, that was Hexen plus the expansion merged into what I believe is a complete IWAD.

But that megawad is not an "iwad". It CANNOT be used as standalone.

It is a bunch of edited maps, modified mapinfo and text files for pickup or event messages. Thats it!

It has NO other resources in it and requires Hexen and DK IWADS to work.

To me, it is just like someone patching Doom E1M1 so we can access "E1M10 - sewers" map from within the episode. It still needs the doom.wad to work as it has no resources.
Top

If that's the case, then, why does he go on about potentially getting banned from the forums for distributing it? And why can't it be put together with a script, the way Wadsmoosh does?

And why, beyond all that, is it still behind a paywall?
Top
393 posts