by Sergeant_Mark_IV
crappy and uninspired name to be replaced later

I think I am not the only one that got very disapointed with Doom 2's ending. Like many others, I wanted to fight a real monster, under the same "Shoot it until it dies" policy as we used against the Cyberdemon and Spidermastermind in the first game. Ladies and Gentlemen, I present you the missing Doom 2 actor! The real Icon of Sin!

This is a MAP30 replacement for Doom 2 or Final Doom. It can also replace the MAP30 in any megawad, and will not conflict with maps that uses the bossbrain actor.

Things to do:
- Make his ultimate attacks more fancy.
- Improve detail on the arena.
- Add dificulty settings (make him have more hp and be more vicious if on UV or Multiplayer)
- Find some voice actor wanting to do voice acting for the final text (currently using the PSXDoom voice as placeholder)

You can download the current test version here:
http://www.mediafire.com/download/8wolt ... onboss.zip

by BlueFireZ88
Would it be possible to make something akin to a vanilla style presentation?

by Hornetzero
Excellent work Mark. You addressed everything that needed to be changed, and now this whole level is a great deal more awesome to the eyes.

by Valherran
This was pretty good, though the boss was still too easy, even on Black Metal difficulty...

I think if he spawned more monsters at once, shot slightly faster projectiles, and used Arch-Vile fire, it would be more challenging

I have some ideas for this, though it would take some collaboration with other map makers...

1. Put back in the original Icon of Sin head wall inside the new map
2. Take it down the traditional way (shooting it in the exposed brain).

Here is the good part.

3. When you think it is dead, the head will detach itself from the wall (wall will lower to the floor in the process), and the rest of the body will rise up and proceed to shoot at you like it does now.

This how I always envisioned the final battle to be, not sure about you though. lol

by Cardboard Marty
I liked the sprites for the boss, though the death animation leaves a bit to be desired. It felt like a bullet-sponge, and not really in a good way. There wasn't a good indication of when it could be hurt, besides the obvious pain sounds. I wasn't sure if him being idle would trigger his "shoot at me" state or what, but I think it should be more apparent. I did like his attacks and definitely the roar, though the roar hurting you and flashing your screen rapidly is kind of eh. Otherwise, great stuff!

I'd also love to voice act for you, maybe even give Icon o' Sin here some new sounds? Yeah? :P

IMO, If there is really anything more that Mark needs to change (apart from his own change lists), is the final battle theme and perhaps its roar. The music... its too dramatic and I was hoping he would put something that would be like a theme for this demon. Something that emphasizes the terror of a single being, not a generic US marine vs Hell mission.

These are some crude yet effective tracks made for a demon characterized by his individual tracks:


As for the roar. He has it all down perfectly, but my only gripe is that it sounds too hollow (funny considering this thing reminds me of those giant Hollow monsters from Bleach).

The first roar in this is something I would personally pick close to for this beast.

I did imply that I tried it in my previous post sir. And yes, it was easy, to me.

by Man_and_a_Half
Great work, the Final Doom theme works fantastically, but overall, there are a few issues that drag the whole thing down quite a bit. First off, Despite being a sprite, and being able to see his full body, this battle isn't very much different from the regular Icon of Sin fight. I can tell alot of work went into it, but his attacks don't truly change much about the original fight, serving only as extra stuff to dodge. Secondly, and this ties into the first point, is that he looks kinda goofy. The sprite is done well, don't get me wrong, but something about the fact that he pretty much stands static in one place, without any rotations, reminds me a bit of the flembrane, not to mention his distance greatly downplays his size; he seems rather small instead of just distant. I'm not sure that a sprite is the best option, even one as highly detailed as yours. On something of that size, billboarding throws off the dynamic of the Icon himself, making him just look flat. Voxels or a model would improve the atmosphere of the fight dramatically, and would also allow for a few stylistic changes to make it more dramatic. You see, at this point, the Icon is similar to Jaws, in that on close inspection, he's a goddamn rubber shark. I think that quite a few movies and games have worked around this problem, such as the aforementioned Jaws appearing as little as possible, or in the case of my personal inspiration for what I would want a full-sized IoS fight to be: Ganon.
You see, in Ocarina of Time, his model is kinda stupid looking. 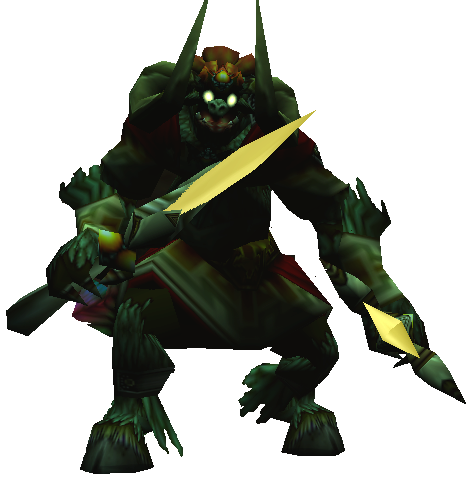 His pig origins are clearly visible, and he isn't truly threatening in any way. But that's not how people remember him, because you didn't actually see his model in plain light in the game, you saw it in dark shadows, making him menacing and downright terrifying, and it's all thanks to the lighting. So make the fight more dynamic, don't have him just stand in a corner throwing stuff at you, make him look more dramatic and less puppety, and you should be golden.
But again, overall, great work, I'm glad to see a full sized Icon of Sin battle.

by HexaDoken
The primary threats of the boss still come not from his attacks but from the hordes of demons he summons and extremely unfavorable terrain(I have falled down in a random pit and rocketed the shit out of myself on at least six occassions). Outside of his "magically drain your HP because I have said so" roar, throughout 7+ attempts, none of his attacks hit me once.

Not bad work overall but this still does not qualify as an "ultimate" boss. Any boss that wins primarily by spamming minions is not a boss but merely a summoner tank.

by Unholypimpin
Not bad though I was hoping the icon of sin would have a full 3d sprite set rather than just always looking at you.

Do you think you can finish this monsters sprite sheet?

by armymen12002003
Good job mark i really like the ground shaking every time it roared looking forward to the finished product, Also you could replace the final battle music with this.

by Enjay
No idea what is causing this but, in GZDoom, I get a strange problem: during the end sequence: the active screen ends up as a small thumbnail in the bottom left. I run at 1920x1200 and I initially thought that the thumbnail was being shown at the original 320x200 but it's actually smaller than that I think. I also noticed a similar thing in ZDoom. However, unlike GZDoom, the problem only briefly showed the small thumbnail before it expanded to fill the whole screen. Other than that, its a great boss and far more fitting than the wall IMO. I think the graphic could be improved further by making the colour of the head and the body match more closely. The head is quite greenish whereas the body tends more towards brown/tan.

by Quadruplesword
Now THIS is a proper final boss fight. This is way more tense and fun than the demon-spitting wall we've all become accustomed to. I really like how you used the Doom 64/ PSX Doom title screen music as the theme for this level, and how you made it so his roar actually hurts you and shakes the screen, and I also like how you used the Doom 64 fiery sky for the backdrop. My ONLY complaint, and this is probably more akin to a nitpick, is that I think Baphomet himself should be a little bigger. I mean, he's supposed to be this almighty god monster who literally devastates Hell with his thrashing limbs in his final death throes, but I don't really get that out of his current size. Other than that, this is fantastic work and is a much needed improvement on what was otherwise a pretty underwhelming boss fight.

Also, that megasphere was teasing me the whole time throughout this battle

(I know how to get up there now, but it's still hard to reach when there's walls of projectiles flying at you).

*I found a bug/glitch/HoM/whatev in this part, I haven't triggered the IoS fight yet and started collecting ammo, and then I saw this HexaDoken wrote:Not bad work overall but this still does not qualify as an "ultimate" boss. Any boss that wins primarily by spamming minions is not a boss but merely a summoner tank.

Seemed pretty damn bossy to me, mookspam or not.