Download here!
and/or read on and acquire more intelligence! 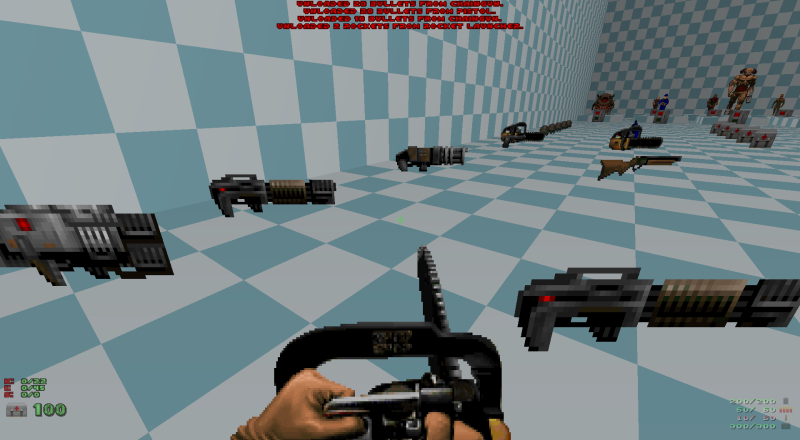 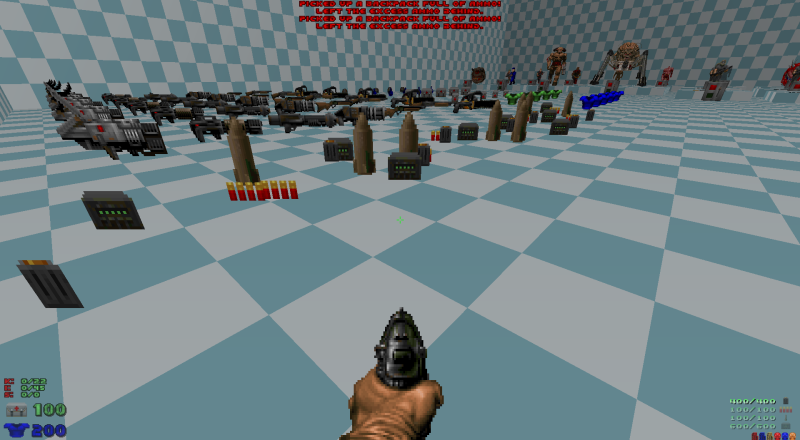 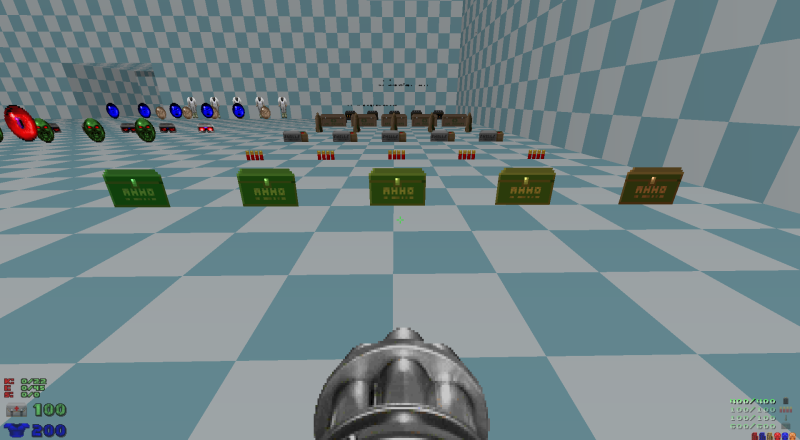 No item tally left behind! 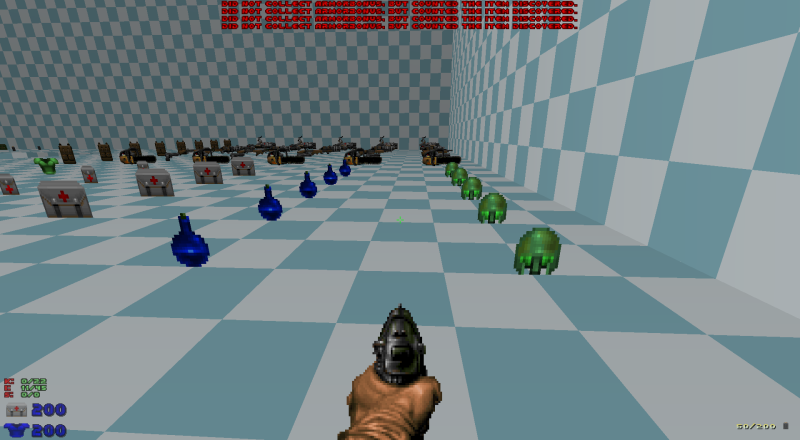 Amount bars, great for mods with models instead of sprites! 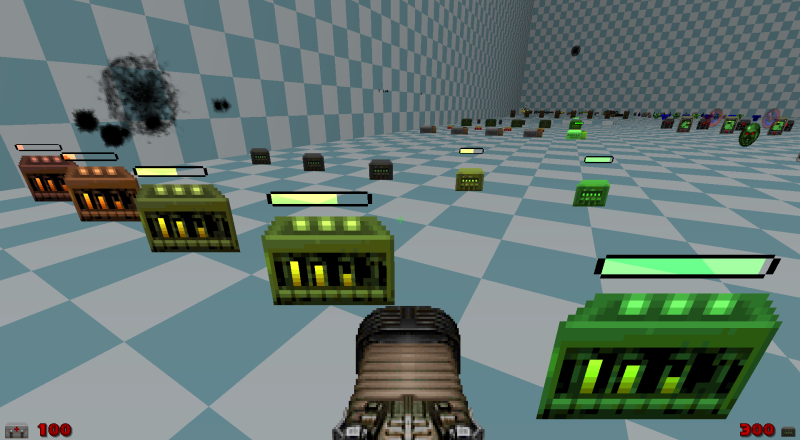 Works with other mods and apparently especially voxels! (Pictured: wildweasel's Accessories to Murder!) 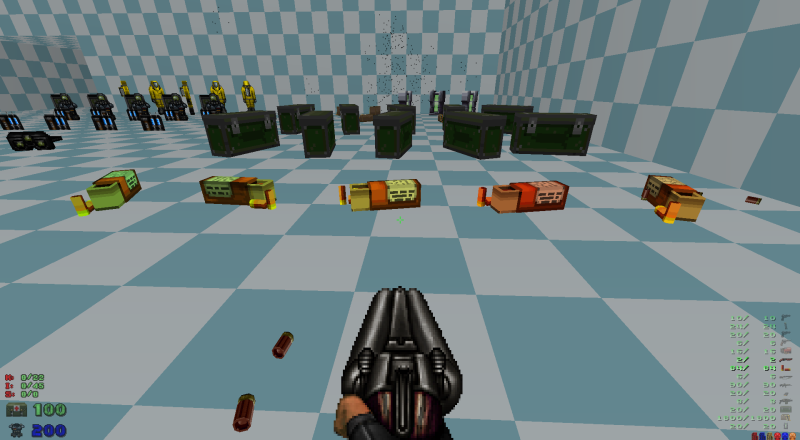 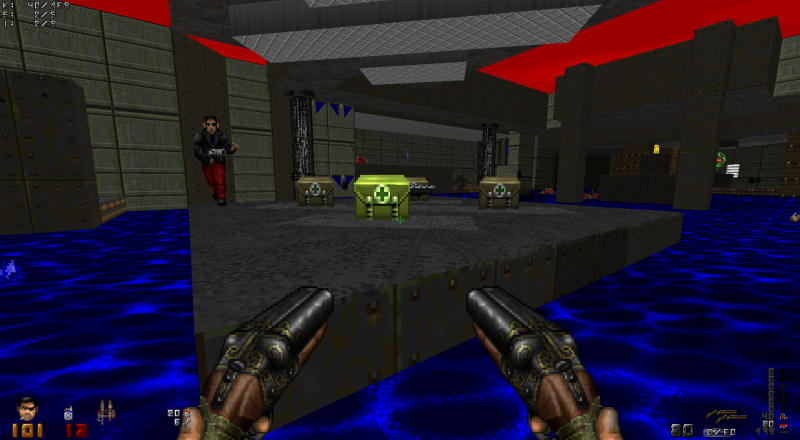 I like to think of it as the spiritual successor to amv2k9's Smart Scavenger.
Not to stomp on zrrion's Thrifty Ammo, either...

This is a minimod I wrote in memoriam of all of the various Doom (or Heretic, or Hexen, or Strife) ammo that has been lost to the ether when players of game sessions the world over collected a pickup that was bigger than their inventory could actually hold. It's a (small) revolution (for collectors and hoarders who have ever been annoyed by this). It says, well Doom, what do you have to say about those 48 out of 50 bullets that magically vanished from a bullet box now?

Goes well with Target Spy for seeing remaining amounts (in all but weapons)!

Spoiler: Known Caveats
- Items will be collected normally the first time you pick them up. Intelligent Supplies' behavior depends on the information from items already in your inventory.

- GZDoom's stock "items" console command is rather useless with this mod loaded. Try "isitems" instead, I promise you won't
be disappointed. Credits for the idea go to StroggVorbis.

- Unfortunately, the color shading is really hard to see on blue items, such as the soulsphere and mega armor.
The color shading is also hard to see with a palette blend active, such as night vision or invulnerability.
If the demand is high enough I'll probably add alpha or scaling to items in the future as alternative or additional visual representations.

- This mod needs some tweaking to load into LZDoom because LZDoom doesn't have an OptionsMenuSimple. Open up the mod,
open menudef.txt, and delete the last code block that starts with "AddOptionMenu OptionsMenuSimple".

- This mod doesn't automatically handle CustomInventory items that autoactivate, for it's going to be a lot more effort to figure
out what they do. This means mods that replace normal item types with CustomInventory items will still behave as they normally
would and thus probably continue to send excess contents into the digital void.
Pickups created by Dehacked are also not supported due to not using base GZDoom class types.
An inexhaustive list:

Bump. If you're one of the first number of people who downloaded this, redownload again for a small but critical fix. The item that manages base types is now not allowed to be removed from the game by crusher, which caused the managed items to become completely unresponsive. Whoops!
Top

Trying to download the mod because it looks promising, but the link doesn't work at all. And Screenshots are never shown. Opening screenies in a new tab works, but not the download link. Is my Chrome wrong? Or is this because of AdBlock or McAfee?
Top

Seems like this whole thing has become quite popular. No item shall be wasted!
Top

The screenshots aren't working for me either.
Top

Captain J wrote:Trying to download the mod because it looks promising, but the link doesn't work at all. And Screenshots are never shown. Opening screenies in a new tab works, but not the download link. Is my Chrome wrong? Or is this because of AdBlock or McAfee?

Yeap, doesn't work for me either.
Top

I managed to get the download working by copying the address and removing the last bit.
Even before the crusher update, this worked flawlessly for me. I recommend it!
Top

With last bit you mean the file type?

And what's that crusher update you mentioned?
Top

On topic, I wanted to look at the mod but the latest LZDoom and GZDoom 4.4.1 refused to work with it. Will revisit it later.
Top

And what's that crusher update you mentioned?

Yeah remove "Zhs2-IS-1.0.pk3" from the address, go there and it'll give you a list that says "Index of IS". Download the pk3 file there.

And about the crusher update, it's what Zhs2 mentioned about crushers doing bad stuff to items but it's been fixed. (I should have said "FIX" not "update", sorry)
Top

Captain J wrote:Trying to download the mod because it looks promising, but the link doesn't work at all. And Screenshots are never shown. Opening screenies in a new tab works, but not the download link. Is my Chrome wrong? Or is this because of AdBlock or McAfee?

StroggVorbis wrote:The screenshots aren't working for me either.

Hrmm, bizarre. This is the first time ever I'm posting my own mod, so I'm not surprised I might also have to debug my hosting solution of all things. I've changed the folder name it is downloaded from in the case Chrome doesn't like hidden web folders (the Linux standard of putting a . at the beginning of the folder name), and added an alternative download link to the first post in case that doesn't work out. The alternative link is on Dropbox however and I realize that it might burn out if too many people use it even though this mod is tiny, so if you must use it, use it quick. Either way, I hope you finally receive and enjoy the mod!


dmslr wrote:On topic, I wanted to look at the mod but the latest LZDoom and GZDoom 4.4.1 refused to work with it. Will revisit it later.

Also hrmm. I set the ZScript version string to "3.7" in the hopes that LZDoom would accept it but I haven't checked to see if it will run in that. Will investigate shortly.
Edit: Well, that bites. Maybe the next release of LZDoom will do what GZDoom 4.5.0 does, but for now I'm reluctant to remove the extension from OptionsMenuSimple from the mod proper solely for the options visibility it provides. If you would like to open up this mod in LZDoom, crack open the mod and remove this section at the bottom of MENUDEF:

In the meantime i downloaded it and played it for a while. Very efficient and cool addon to the ammo/health reserving! I always play Doom and other FPS games by spending all ammo from the weapon so i can try pick up the entire ammo items scattered around the map. Wanted to make the ammo potent, you know?

It's good and all, but my feedback would be this: What about Berserk and Megasphere? They both are still obtainable at full health and armor unlike Soul's. And i can see the Green Armor recolored when almost out of armor points, but not the Blue one for some reason.
Top

Captain J wrote:It's good and all, but my feedback would be this: What about Berserk and Megasphere? They both are still obtainable at full health and armor unlike Soul's.

See the "Known Caveats" spoiler in the first post. Reading action functions from Actor states (particularly CustomInventory Pickup states, like Berserk and Megasphere use) is not an exposed function in the ZScript VM, and writing a custom parser to figure out exactly what a CustomInventory item does is more work than I feel inclined to put into this project. If I were to handle these items in any way, it'd be to include a menu toggle for AutoActivate CustomInventory and let the player's intelligence determine whether the item should be picked up, such as with the currently existing Use key toggle-back-to-vanilla-behavior functionality. I'll think about that once I'm sure I have client CVar reading working in multiplayer.
Top

great idea, unfortunately it doesn't work with Heretical Doom due to how I have the mana trap and class checkers using the custominventory pickup state, as mentioned. Since I'm converting the mod over to zscript (almost) entirely for the next version, I'll see if I can come up with something different to help compatibility

Bump again. Today was a busy day for this mod, but now I can finally call it feature complete. The client CVars are confirmed working in multiplayer and a menu toggle has been added to block collecting autoactivating CustomInventory items while intelligent behavior is enabled, if one so wishes - recommended for use with Use key reverting item pickup behavior to vanilla. I also spent a couple hours figuring out how to enable SSL on my webserver so Chrome users would not have their download blocked from the main link, which was its own adventure, and for that I hereby deem this version of Intelligent Supplies 1.1. Jump to the main post to grab it.

Will there be a 1.2? Maybe, I have a crazy yet multiplayer-only idea in mind for a minor redesign. If anyone wants more visual feedback from the mod as to remaining item amounts, I'd like to hear ideas on that as well. Scaling? Alpha? Drawing a bar somewhere?
Top
65 posts