This happened while I was streaming Slaughterfest 2011 with this mod: 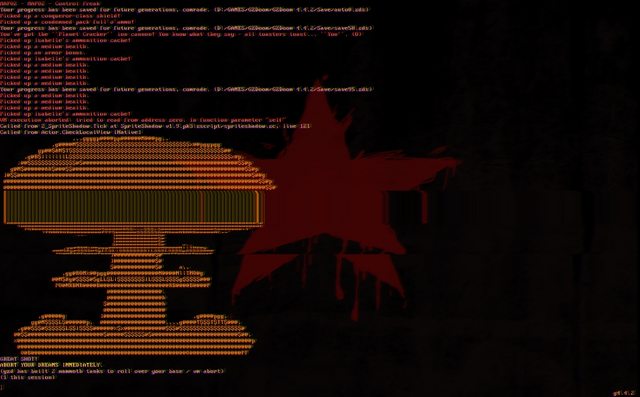 Happened when the missile I used from the true guided mode of the Death Head's altfire was about to impact a group of enemies on MAP02.

EDIT: Forgot to mention, I was using GZDoom 4.4.2 for the playthrough.
Top

Huh... I have never seen this console message before. It looks so genuine, it feels like it crashed intentionally... Or maybe not!
Top

That'd be PB's fancy error catcher. Though, going by the message above it, it looks like this is because SpriteShadow is loaded, and the mod is doing something that SpriteShadow doesn't expect to happen.
Top

wildweasel wrote:That'd be PB's fancy error catcher. Though, going by the message above it, it looks like this is because SpriteShadow is loaded, and the mod is doing something that SpriteShadow doesn't expect to happen.

Oh well. Gotta redo all my playthroughs that have RO in the load orders (of which there are quite a few). Thanks for pointing that out to me.
Top

@ Mister Copper - are you playing with PB + ROK combo from Redem:

That is my default setup!
Top

The camera missile mode spawns quite a few special actors. It's possible the red colour or control actors getting removed confuses the shadow thing, whatever it is. If you tell me the sprite shadow mod, I can look into it for an update.
Top

The camera missile mode spawns quite a few special actors. It's possible the red colour or control actors getting removed confuses the shadow thing, whatever it is. If you tell me the sprite shadow mod, I can look into it for an update.

It was Nash's SpriteShadow mod that I was using.
Top


Captain J wrote:It looks so genuine, it feels like it crashed intentionally... Or maybe not!

It's the same as Guncaster's crash screen, which I themed with a nuke to suit RO. I made it so crashes would at least be funny. Writing zs sucks without it.
Top

Oh, one other thing: KeksDose, I should tell you that a similar thing happens when I use the Ramjet altfire's self-destruct sequence. Happened to me when I was playing SF2012 with SpriteShadow loaded.
Top

I added a more foolproof camera switch back for both, preventing aborts, but it's still a bug in the shadow mod. It should check if the player's camera is null in that line.
Top

This mod was so good that I now am developing my own game inspired by the weapons of this game. I am making my own weapons, but its gonna be a class based shooter just like tf2. (of course I will say this mod is the inspiration and to go play this mod) Thank you, Russian overkill team.
Top

In 3.1, Thicker Libra or Sandman for Alosha Plz T.T Instead Obliterator.

I know it's been a while but I finally got around to getting the newest version and I'm sad to say the Vindicator still doesn't hurt the player.

Does anyone know how to make the monsters not shoot at the tank? I added NOTARGET yet they continue to aim at it.
Top

Yeah, that seems to work. Thanks.

Edit:
Some bugs to report.
• Erasus primary fire doesn't properly use ammo
• Leviathan is missing a check on one of the A_Recoil lines causing it to get stuck at a 0.99 zoom level until you switch guns.
• Not really a bug but when you shoot the Schwartzer shotgun you'd think the screen recoil would cause a repeating effect but it just stays still.
• Torchglow and Ramjet don't have screen recoil. Ramjet does but only with weapon recoil turned on.
• Pantokrator's screen shake is absurd. Surely, this can't be intentional.
• Gopnik could use some physical recoil when shooting the disk.
• Overwhelming's altfire doesn't have screen recoil.
• Antov's shield reflects your Torchglow primary shot back at you.
• Tespech altfire gives 30 casings instead of 40.
• There's something wrong with the Vindicator. If the boss is against a wall it's a one hit KO. If not it only hits for the initial 7k or so and then none of the worms come back to hit him. If I load up 3.0a, the worms come back and do an additional 13k damage after the explosion. I think it's safe to say this gun has been severely nerfed by accident.

Can we talk about balance for a second? I'm aware anyone who cares about such a thing should play a different mod but I'd like to point out some outliers.

• NoInfighting should be on all difficulties. The monster health to damage ratio is way off and this mod needs all the monster buffs it can have.
• In general, monster damage needs a buff and self damage needs a nerf. I get it. That's the gimmick of the mod. The only threat to you is yourself. This creates a problem. Why use any explosive weapons when non-threatening weapons kill stuff just as well? This brings me to maybe the biggest deal.
• Ammo. When ammo is so plentiful you have no need to manage it. You can just shoot all day with one weapon and never run out. Take the Borsh for example. Why ever switch off it? It kills rooms so effectively, you don't even need to look in their direction.
• Item power is heavily skewed to the powerups making slaughtermaps even easier in comparison. In Doom a soulsphere gives 100x the health of a health bonus, here it's 1000x.
• Weegee is grossly overpowered. Yes, infrared is a rare item to find but this life leech can easily gain you 100k health.
• Superweapon immunity is very powerful considering you can drop a Hindenburg bomb and clear the level. For it's intended purpose is as good as an invuln sphere. For it to replace a common item like a radsuit just doesn't gel with me.
• The berserk upgrades should only last for the level. This one seems pretty obvious.
• Another thing that should only last a level is the war tank. It's way too good to be a permanent fixture. Also, please make it teleport behind you and not on top of you.
• Self healing with boolet casings is far too efficient. Each casing is worth 4 health. So, when I pick up a boolet box I essentially also get 800 health.

Now on to some weapons
• Tepesch is tepid. It's not only the weakest tier 6 weapon, it uses bullets and gets outshined by the miniguns.
• Yamato altfire is too cheap to fire. 25 cells is nothing.
• Beef Supreme was made worse with the bouncing effect. It not only now has insane ammo efficiency but in the likely event the monsters died with the initial blast, now you have to wait for it to stop blowing up to move there.
• Gopnik nuke mode outclasses most super weapons and it's too cheap to fire. I doubled the cost to 120 missiles and it still feels like cheating.
• Hotrod needs buffs across the board. All the attacks are balanced well within themselves but the gun shoots too slow to be comparable with the other tank shell weapons.
• Planetcracker needs some love. I compared it's killing speed with Instafun and it consistently killed slower than it's little brother. This was using their primary fires of course.
• Gurumaster has easily, the worst altfire of the super weapons. It has the longest build up, kills the least amount of guys, and has the highest chance of killing you.
• Removing the reload from the Quadshot makes it feel much better to use. The altfire already doesn't reload, may as well. Admittedly, after writing this I saw that it has a point blank damage bonus. That certainly makes it better than I previously thought.
• Union does pathetic dps in comparison to the Antov and Matrowhatever. You're basically forced to use the burst fire. Admittedly, the altfire is very good because of the healing.