To Darkrune, Retronutcase and the makers, I found out why the Leviathan have infinite ammo. Here goes the following:

- Having one shotty will have no issue, with both primary and secondary modes
- The issue comes when you have "akimbo mode". The trick is, when using the secondary mode to aim with the weapon and shoot in that moment, magically the weapon have infinite ammo.

I don't know why or how but just have it and....you just need that weapon.

EDIT: I found another possible...bug...??? (if it's intentional, then it's ok)
It's related to the berserker pack weapon. When pressing the quaternary fire button, a song is heard...right? Well, once to press again to go back to the normal track used on the map and, selecting another weapon with the mouse wheel or with the numeric keys, the song used with the QF (quaternary fire) is heard AGAIN....
Can be "fixed" with that shotgun that shoots a huge shell and spread a lot of mini shells...
Top

Welp, time for me to play through the entirety of SF2012 again.

Btw does anyone know how to unleash the reload attack of Violator? The weapon turns on its laser pointer but can't really unleash the nova of shells as it's described on the first page.
Top

Found an issue with the new Recoil Multiplier slider; the Leviathan's alt mode firing and Gorynch don't account for it. Even if you turn the slider all the way to 0.0 these two weapons still shift the view when firing.

EDIT: Just found out that if you fire the Channeler's alt fire directly downwards, it stays permanently: 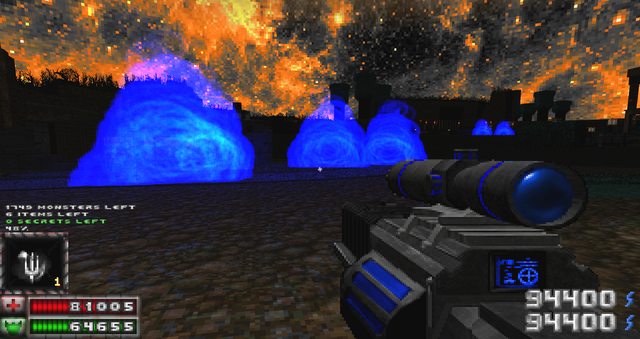 - Switching away from the Berseker Fist forces its music on instead of resuming the level theme.
- Instafuneral is still performance killing on certain Sunder maps.
- When classes mode is off, weapon drops from enemies are not treated as 'dropped', and as such will respawn if the items respawn cvar is enabled.
- When classes mode is enabled, the inverse happens; most weapons and certain ammo types that are map placed will be treated as 'dropped' and won't respawn.

- For some reason the music script functionality on that got... reversed, lol. Wonder when that happened, I must've been sleep-deficient or something?... Fixed.
-I am not sure how I can feasibly even attempt fixing that. It's just a FastProjectile with a sound and trail. Can't do much until I can determine what's the bottleneck there.
-Don't think I can do much about this the way class patch is set up; weapon drop/stay behavior and respawn options are aids to handle with everything else on top so I'd recommend just sticking with default settings in this regard.

The first is intentional, the next two however are not. Fixed.


Mister Copper wrote:Hey, so this happened while I was playing Slaughterfest 2012:
shield kersploding vm abort.jpg

That admitedly is a big oversight on my part, but to be honest - it was a recent addition and when you play this thing for so damn long, you kinda stop getting hit with your own nukes so much.


D3athStalker wrote:Btw does anyone know how to unleash the reload attack of Violator? The weapon turns on its laser pointer but can't really unleash the nova of shells as it's described on the first page.

Missed retooling that bit in the OP - it got removed in favor of having a guiding button for the fire pillar, hold the reload to guide it around.


Alptraum wrote:1- When you get a keycard, the red one for instance, you get 2 keycards. Is that a feature or a bug?

Intentional. You get stock keys alongside custom RO ones because!... some maps are real funny with their locks/scripts and only respect default keys. It's a preventive measure for such case and it was around for a long while, but I made the key list lately display all keys to save myself headache of displaying the custom keys people add to their things and as a side effect, that made them both appear at once.

I smell it's a possible map ID conflict. RO has its own map ID's for the title map weapon placement and what have you. Not much we can do about it cause if I'd change it to different set of numbers, something else would start conflicting with them.


Beed28 wrote:Found an issue with the new Recoil Multiplier slider; the Leviathan's alt mode firing and Gorynch don't account for it. Even if you turn the slider all the way to 0.0 these two weapons still shift the view when firing.


Beed28 wrote:EDIT: Just found out that if you fire the Channeler's alt fire directly downwards, it stays permanently:

A very old-timer and well-known bug, I fixed it in places like GC's flamewave; I found it funny and in the spirit of the mod, so I decided to leave it be here as a feature, reminding me of times I sticked bison shots in grates of TF2, lol~
Top

PillowBlaster wrote:-I am not sure how I can feasibly even attempt fixing that. It's just a FastProjectile with a sound and trail. Can't do much until I can determine what's the bottleneck there.

After playing around, I found the cause! It's the three A_Explode calls in InstafunProjectile:

I removed the final '1' argument from the last two A_Explode calls (whist leaving the first A_Explode alone) and it runs like a charm.
Top

Finally Erasus becomes more useful not a starter suicide tool anymore. Wish Union could have the same treatment but I guess its self-damaging is much tamer than old Erasus.
Also thanks for adding recoil control, now I can spam machine guns without my screen shaking like crazy.

Spaceman333 wrote:lmao, just kick back at spawn and let a flying gun do all the work. :D

Solaela wrote:*looks at the bolded* ....as if I didn't have any MORE reason to stick this on something like Planisphere 2 and cut loose with it from the safety of the start room.... I mean I guess it doesn't pick up keys but that's what idkfa is for. lol

Hmhmhm do I have a surprise for you. d:

edit: There's now an option in the cheats menu that allows the ramjet to pick up certain items (keys, weapons, and ammo, but not powerups, armour or health).
Last edited by KeksDose on Sat Feb 08, 2020 10:54 am, edited 1 time in total.
Top

Hotfix, fresh off the press as it's still slightly on fire, for all dem bewgs and things we spotted or got reported in the meantime!

-Fixed Leviathan somehow ending up with infinite ammo after using alt-fire (I really have no idea why that happens an it baffled me to no end, but I figured out a way around it. Still, thanks gzdbama).
-Fixed Pantokrator not having quad sound firing off with quad upgrade on primary fire.
-Fixed Overture Shell 1812 briefly turning into normal shell upon end of the sequence if you had quad upgrade.
-Fixed Tank Music starting when you switch the Berserker Fists off (I blame the fact I play w/o music on these days so I missed an obvious one lol~).
-Fixed shield reacting to you being damaged while on god mode of any kind.
-Fixed Hotrod sparks not appearing at all and appearing as, well, Hellstaff in Heretic, lol.
-Fixed Hotrod's alt-fire not shredding through things properly.
-Fixed HUD a little in Heretic.
-Did some damage tweaks like making Stachanov less laughably weak compared to other slot 7 guns on higher difficulties or giving Berserker Fist's rock throw a sizable buff on direct impact.
-Added some more tooltips and tweaks while using some guns because watching streamers being airheads is a nice feedback for that matter.
-Fixed Instafuneral lag (I forgot that 4th case in A_Explode is essentially A_AlertMonsters and that lags a lot if overused).
-Added temporary, sizable damage resistance while using Porzygun's spin attack.
-Fixed the Telefonmast and RPC again because it seems that since 4.3.3, using BounceType after +RIPPER doesn't make the cut either. Fucking lol.

KEKSDOSE'S INPUT:
* There's now the enhanced vm-abort featuring Great Shot from cnc.
* The Ramjet can now pick up things and give them to the owning player. Set in Cheat Options.
* Increased Ramjet's use range from 45 to 95.
* Fixed: Fly Check causes vm-abort when player number < 0 gets passed.
* Started testmap rostuff. Todo is to log all spawns.
* Added music Mode Select from Super Puyo Puyo Tsu to rostuff.

ZHS2's INPUT:
- Fixed shields vm abort if exposed to too much explosion. I am surprised how that even flew under the radar, but guess playing the damn thing for 10 years makes you much less prone to just... nuking yourself, you know?

Press for the Apocalypse has begun.
Top

Woooo! The fixes are great so far! Cheers!

Thanks for the fixes and amazing job with the new version

Ok, so possible bug on the Beef Surpreme weapon. This weapon, when used on the third map of Eviternity, times out and gives some code. I will try to post this correctly if I can.

i need a fix
You do not have the required permissions to view the files attached to this post.
Top
1777 posts