I don't think the new IsMoving stuff is working right. All the weapons have basically no recoil now even if you're jogging at full pace. The bronto doesn't even hurt to fire.
Top

Are these new recoil values permanent, or intended? Bracing seems to be completely superfluous now. Even controlling a full auto pistol, or an overcooking ZM66 is pretty much trivial.
Top

The new recoil numbers only really make any sense to me in the case of the bronto, which was indeed really janky-looking and possibly unintentionally exaggerated. I did a quick comparison between the recoil all the way back in 3.2.4 (five years ago), just before the IsMoving and wepbobrecoil commits, and now.
Firing the Bronto unbraced:
3.2.4
Before wepbobrecoil change
After
This looks just about right, and the recoil did seem wrong before the change, but it falls apart with any other weapon.
Firing an SMG mag on full auto without compensating at all:
3.2.4
Before
After
The recoil was actually higher five years ago than it ever has been since.
Ten rounds from a Liberator:
3.2.4
Before
After
Shockingly close on the first two. If it weren't for the sights, you'd be hard-pressed to tell the difference. Definitely wasn't any accidental change affecting this like the Bronto, and most of the other weapons follow this pattern. I think something was (and still is) wrong with the Bronto specifically and not recoil as a whole.
Top

I figured something was weird about the autopistol.

Bronto is intended to be this awful though.
Top

Current commit build is pretty great, the only thing out of sorts that I've noticed is that extreme pain (like getting Alex Murphy'd in armor that succeeds in blocking penetration of the rounds, or applying 3 or more burn treatments) will cause some severe jank while reloading (some?) weapons, like the SMG. The positions the view sprite goes to doesn't seem to be incorrect, they just aren't interpolated. Everything else seems smooth and proper, really enjoying the sight alignment with weapon sway, particularly the vulcanette. It's changing my aiming habits and makes flick shots land more, at least for me.

Edit: Actually, perhaps it's not the extreme pain, but rather the new IsMoving status; extreme pain just exacerbates the effect. Noticed it just now when I was loading the side saddles on a Slayer right as I did a jump dodge. No injuries or crazy heart rate whatsoever.
Top

There seems to be a slight pinch iffy on the TB/*ERP monitors. As in, they're not fitted to the sights and look a bit tiny. 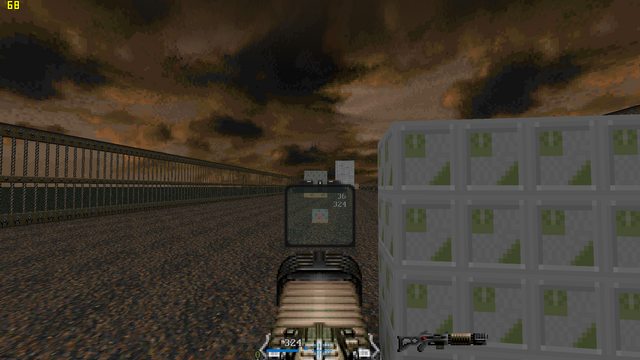 EDIT: My mistake. It seems to not be on HDest's side. I had the Paranoid mod loaded (wiretorn so I can play it with HDest) and for reasons beyond my comprehension it seems to be breaking the zoomed-square-specific sights. I'll be snooping around to see the true culprit, sorry for the false alarm.

EDIT2: Culprit found. Paranoid had CONFONT.lmp that for some reason wrecked the sights. Removing it fixed the problem.
Top

The reason would be that CONFONT is what HD checks for to determine if LZDoom is in use, and it needed to check for that because the newer scope code wouldn't work with it. HD doesn't even run on LZDoom anymore, so the compat code is useless now and only serves to cause problems like this.
Top

Thanks for the interpolation change on the view sprites.

A month or so ago, when you made wounded monsters occasionally play their death sound to represent pain, the lost soul went under the radar for having this feature disabled (simply because the death sound isn't just a groan, such as what the zombies vocalize), unlike the arachnotron, which was reverted.

Edit: was that arachnotron death scream on pain feature reverted at some point? Could have sworn you already changed that in the past.

The viewsprite tic rate is much better than the slideshow before, but could it be set to match the normal ready state of a weapon? It's almost perfect. Assuming, of course, that there isn't a desync issue with changing it to a higher rate.

Lastly, the SMG has next to no sway after the revamp; while it's a compact, ergonomic weapon where the center of gravity is closer to the chest, it has absolutely miniscule sway compared to, say, the ZM66 or Slayer for rough dimensional comparisons.
Top

The problem with the weapon offsets right now is that there's no way to combine interpolation with state-defined offsets, so either I turn off interpolation anytime those offsets are added, go out of my way to override them so they are never visible, or let the interpolation constantly jiggle back and forth.

I kept chalking up the SMG thing to it being the lightest weapon with a stock, hence why I hadn't fixed it until now when I realized it was doing things not even the blooper and no-GL ZM were doing. Should be fixed now.
Top

I figured, thanks for clarifying. Hopefully something in the future would allow for it. Still, it's miles better now than when the first few changes rolled out.

Bug: the empty mag clatter sound (and bounce behavior that produces this sound) from reloading weapons, won't cease or otherwise allow the empty mag to come to a rest if it drops at particular heights; for instance, the HD range's window ledge/short wall will consistently cause this bug when you reload your pistol at plain standing height, while allowing your empty mag to land anywhere on the top of the ledge.

Spoiler:
(in my case, I have height set to default 175 cm because constantly having to slightly duck under every doorway at 183 cm can be mildly annoying, depending on the map. At least in Doom, IRL height ducking seems to become much more prevalent at 6'2" or greater.)

Could you increase the blooper's slotpriority? I've got a mod weapon that's in between it and the full launcher in weight, but I can only prioritize it above or below both because they have the same priority.
Top

This commit introduced a desync that occurs if two players have mismatched FOVs. Higher FOVs apparently increase the tolerance for your weapon getting lowered by turning. To reproduce it locally: Launch one client with 90 FOV, the other with 100, then use the turn180 command with the BFG selected.

Another bug: if you start the game with a loadout that has the elite soldier kit (has to be sol specifically, not equivalent items with normal codes), you can inject or drop stims infinitely. They simply aren't consumed after the first one. This stops happening if you put the stim away after selecting it instead of injecting or dropping it, or if you drop it straight out of your inventory rather than using drop weapon with the stim readied.
Top

Eric_ wrote: ↑Sat Aug 06, 2022 11:20 pmThis commit introduced a desync that occurs if two players have mismatched FOVs. Higher FOVs apparently increase the tolerance for your weapon getting lowered by turning. To reproduce it locally: Launch one client with 90 FOV, the other with 100, then use the turn180 command with the BFG selected.

I can replicate this with the most recent (until now) commit, which uses crossbob rather than wepbob here, but switching this back to wepbob I can no longer replicate this. (I can also only replicate it if the clients start out at different fovs - changing to a different fov during the game does not cause any problems.)

It's possible that one of the numerous changes since that commit might have addressed the reason why the fov would cause a desync even when wepbob is used, so can you try it now?
Top

It may be that I just need to get used to it, but the footsteps as they are now are incredibly distracting for me, at least in the way they sync to the weapon bobbing. One or two dev updates before that was fine, and I like the idea a lot of actually needing to crouch to sneak past mobs now.
Top

I actually like the footsteps, but it would be cool to see a toggle for them or at least a volume option. They do get distracting at their current volume from normal jog pace.

Are the (assuming they're WIP, since there's currently no bob for player movement) new weapon bob changes aimed at potentially eliminating the use of frame interpolation?