Just a quick question, is there a HUD that works with HD? I tried one that was linked, DarkHUD I believe it was named but I couldn't get it to really appear cause of the resolution wonkyness. I'm using a somewhat older version of HD, 4.5.0b.
Top

Shrapnel almost completely ignores player shields, causing wounds and tearing radsuits while inflicting next to no damage on the shield itself. The same situation with an enemy shield sees the shrapnel completely blocked, even if it's an IED exploding directly under them.

Also, if you're wearing a radsuit under a shield, regular bullets will be completely stopped and fall out of the air instead of the normal behavior of being absorbed by the shield and passing some bashing damage through to the player.

Both of these are definitely bugs and I have no idea what the fuck is going on with them. Most likely I'll have to completely rework this part of the bullet calculation to have everything affect the bullet directly instead of trying to return penetration/shell values.


EDIT: Actually, that second one makes sense (and I should have quoted that last part of the message): the shield absorbs everything, then the bullets die against the radsuit. That they don't visibly stop if you don't have the radsuit seems to be related to the first point...


EDIT: Probably unrelated. Will focus on the first issue for now.
It seems from the debug info that the shields just... give up?... after too many fragments. I'm unable to replicate this with the grenade launcher but the hand grenades do fine.
EDIT: Not the number. Just took a shitton of fragments from a near-direct hit and the shields performed fine (though the immolation effect would have killed me). I have no idea what the difference is.

EDIT: ...it's not the explosion code fragments but the fragments from A_SpawnChunksFrags. I would never have suspected this.

EDIT: There's a check in the shield that's intended to check for self-inflicted bullet attacks. It's smart enough to avoid A_HDBlast fragments but not A_SpawnChunksFrags fragments. There's no purpose to this check and this is now fixed with its removal.
Top

Eric_ wrote:Also, if you're wearing a radsuit under a shield, regular bullets will be completely stopped and fall out of the air instead of the normal behavior of being absorbed by the shield and passing some bashing damage through to the player. I can rationalize the suit absorbing the slight impact that comes through the shield and I think that's good mechanics even, but I'd think the bullets would dissipate on contact with the shield regardless of what's underneath.

That's actually explicit in the radsuit code - it adds to the penshield variable but doesn't apply additional effects the way armour does.

I'll have to think about this one - it seems weird that the radsuit would have vastly superior blunt force cushioning once the bullet's been stopped, but I'm not sure exactly why it would behave differently.
Top

There seems to still be a little bit of odd stuff going on with recasts in a liberator. If a lib fires even one recast, it seems to assume every other round in the magazine is a recast as well.
Top

It looks like Thunderbuster arcs may be affected by the same problem as regular explosions. The shield will only absorb arcs if they're from an enemy, the player's own arcs and spray bypass it entirely.
Top

Eric_ wrote:It looks like Thunderbuster arcs may be affected by the same problem as regular explosions. The shield will only absorb arcs if they're from an enemy, the player's own arcs and spray bypass it entirely.

Somagu wrote:There seems to still be a little bit of odd stuff going on with recasts in a liberator. If a lib fires even one recast, it seems to assume every other round in the magazine is a recast as well.

Can't replicate. I'm using "hd_give 7mr15", removing a freshly spawned Lib mag, replacing half the rounds, reloading the gun and firing full-auto while watching the debug output - exactly half the shots are identified as being reload bullets.
Top

Utterly bizarre. I wish I was recording, because now I can't replicate either, even with the older version. Thank you for the redundant check just in case.
Top

I'll keep an eye out for the next while, there might be something obscure I'm missing that somehow skips the unflagging.


EDIT: Re: bullets on radsuit: I think I'll leave it as is. This was designed like this (instead of simply reducing penetration further or calling BulletDie) in order to avoid 2 wrong-looking scenarios that shouldn't apply where the radsuit wasn't breached:

1. bullet leaves a big puff despite not having actually loosened any material from the suit.

2. bullet somehow passes through due to an edge-case calculation and wounds the wearer despite ostensibly not having gone through the suit.
Top

Can confirm that the stutter bug is still present, but with your viewbob alteration, it's not super obnoxious.

Could an input be added in the backpack to cycle through items of a given type? I generally leave mags full or empty in the backpack to have a quick visual identifier, and when I want to refill one mag or pick out a battery to leech off it's last bit of power, I often have to dump out everything else to get to it instead of being able to rummage around a little and yank out the mag/battery I'm focused on.
Top

I'd add it, but I don't understand the backpack code anymore and I'm not sure what input would even be available.

(This, and some pickupmanager-like way to pull out multiple items at once... having a big stash of loose rounds is painful)

Mag cycle now added. Newly inserted mags are now also added at the top rather than the bottom of the stack.

As for my own issue I've just made inserting and extracting small items go much faster - not realistic but there's no way to model what's going on without creating a whole new subgame in itself.

As for the jitter, I've been overencumbered on multiple runs now and I haven't been able to replicate it at all (or ever but at least there was *something* that was wrong that came up)...
Top 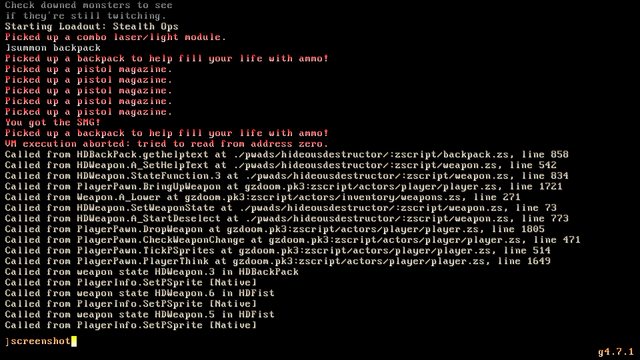 NEW UPDATE! (and yes that above VM abort had been addressed before I posted this)

Seems like at some point the archvile's corpse/lingering, flickering light, broke. Doesn't fade away, simply persists, though I remember very recently (as in, a week or so) of this not being the case. In the instance this happened, I did hammer the hell out of the archvile during the death sequence out of spite. An xdeath error?
Top

The steps are simple and straight forward in this case, which is why I didn't elaborate. But for a step by step, here's what I just did that also yielded the same result:

1: loaded the range map
2: spawned an archvile, shot it until the final pain trigger causes the fade out death
3: observed that the archvile's 'corpse' doesn't truly disappear when the sprite fades away, it remains as an invisible, non-obstructing, draggable entity that displays dynamic light flickers perpetually, along with registering collisions with hitscan and projectiles, still spraying yellow blood.
Top
8488 posts