Description
FSS: Fuck Super Shotguns is a map set I've been working on for a few months now, and my first real (and first released) attempt at mapping. I am very slow at it.
Currently, the demo includes 3 maps, and a lot of ZDoom features.
Has been tested in GZDoom 1.8.10, but not in ZDoom 2.7.1. It should work in either, anyway. 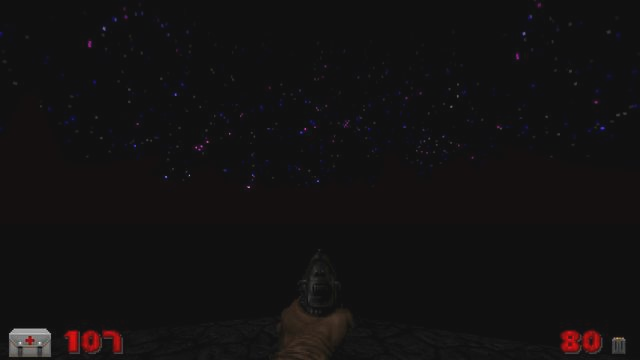 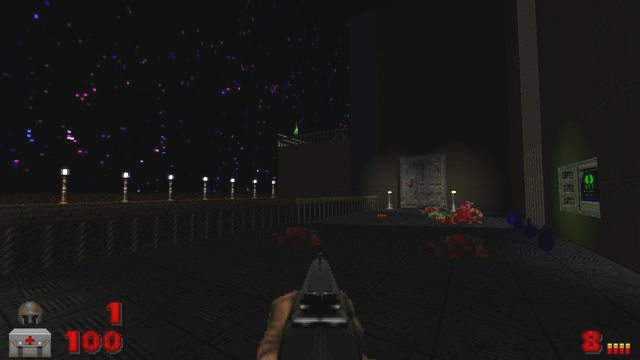 Place i died a lot : That damn laser place on map 3

The first 2 maps aren't hard due to the limited amount of enemies. However the layouts can be confusing specially on map 1(i don't know what you've smoked but that map is confusing

) The 3rd map is hard because of all those enemies (around something like 100) and even if they are supposed to infight - thing they don't always do as soon as they see me - there is not much firepower to stay alive. However it's just my first playthrough and i haven't discovered every secrets. I'll probably find new stuff after a second playthrough.

Conclusion : For a first attempt at mapping it's a good one. Of course it's not perfect but I know how it can be difficult to create a map. I personally tried to make one but it needed more that some work to say the least

I'll play the maps again with different mods to see how it goes.

by Sgt. Shivers
Blasted through the mapset, really neat and surreal! I'm liking the monitors with the text on them.

by Marrub
It's been about a year since I last worked on this and a year since then that I released this project. It's dead now, I can't fit the pieces of this mapset together in my head anymore, so, uh...
Here is my last copy of it. This copy contains two new maps, one is nearly complete and the other is just a concept. There were some minor changes to maps 1 through 3, if I recall correctly.
I am strangely proud of this project, since it led to a lot of interesting and useful thoughts and ideas, and it still manages to impress me that I could create something that I like, for some reason.
Anyway, enjoy. Pro tip: Kill the marines on map 3. I was too lazy to give the player a PowerProtection against them.

Here is the initial story for the map set, since I won't be able to write it in now. It's (not in a good way) cheesy and weird, but I can't really blame myself for that because I was a lot younger when I wrote it.

[spoiler=Don't read this unless you are insusceptible to crap writing]The Story So Far:
After Doomguy (we'll call him Stan) wrecked Hell, he went on a long
crusade to wipe out every demon still remaining on Earth.

However, a few minutes after concocting this plan, he realized just
how god damn long that would take, and decided instead to reform
the last citizens of Earth and build a new civilization in the
ruins of the now old world.

Together, they built a stronghold, populated it, defended it, and generally
didn't cause internal strife.
The new populous had expanded and hunted demons together over many
years, as Stan guided them.

Eventually, civilization was pretty much normal again, with Stan sending
research teams out to mars and around earth to go look at cool
science-y things.

This is where you come in. You've just turned 23, are enlisted with the
new UAAF, and ready to kill the demons!

One day, you're in an old, repurposed UAC base with some scientists in it,
watching out for demon attack with some buddies. The place is cramped and
shitty, and there isn't anything to drink.

After many hours just standing around, watching the bleak and undetailed
martian skyline, the next course of action is very obvious. Get something
to drink before you die of thirst!
The entire complex's doors are unmarked, and most of the maps have been
ravaged by the sands of time, making it very hard to find anything.

You look around the corridor, and notice a peculiar door, one in greater
shape than the rest, and decide to investigate.

Inside, you find a really cool looking portal, much different from
the other UAC "gates" you've seen around. And this one is active!
Obviously, to your friends (whom you had now summoned), this means that
the best course of action is to throw you in for laughs.

The travel was instantaneous and didn't give you a giant headache such
as the gateways did, raising some suspicion.
However, this suspicion was immediately answered with you awaking in a
new, terrifying realm...[/spoiler]

And along with that, the story for map 3's ending and transition, and explanation for map 4's entirety, since I didn't implement or write in anything about either (this was mostly written for this post):
[spoiler=This one is probably less crap]The beast names himself Sorrow, in his tongue. Sor'h Xoda Pratium. He appeared first to me in a power outage during a mission; as he slayed through all of the marines around me, whom at this point had all but disappeared from my sight, my mind started to shake as my eyes bled. His ungodly appearance wrought but the words:
"You have underestimated your nightmares, as if they are only dreams."
"Deliver my message and you may be spared. Heed this request or perish in eternity."
I blacked out. As I shook myself from unconsciousness, a few friends greeted me...
I escaped from the facility, hands held high to the sky as I finally managed to stretch my back out. Crawling through air ducts is no fun.

Just as soon as releif sets in, a nearby terminal begins to beep. Of course.
Lambert told me of my new mission as the general signed me off: I am to find an "erroneous object" in the midst of a burning city. The place has been attacked by demons, and nobody knows how long it'll be until they find this "object" and use it for... God knows what.

As I halted flinging through spacetime I was immediately greeted by an entire squadron of fellow soldiers. They told me of the situation, that they had been here for hours waiting for their pointman – me.
We marched and ran through the city rampantly, as if a bunch of insane assassin ninjas trying to murder not one target but hundreds. The invasion was immense, and the city layout oddly confusing.
I finally made my way in through the designated building, and found it. The so-called "object".
It was a square – not a cube, but not a two-dimensional surface either. It was a square, projected toward every angle, projecting its own light over reality's. It was oozing, seeping through to this world like a box full of liquid impossibility. I could only believe my eyes because of what I had sawn earlier.

Though in that moment as I stared at it, I noticed that the longer I kept looking, the more I was being engulfed. As I realized this, it was already too late, and everything around me had shifted.

I was yet again standing in another world.

To the heart of this place I...[/spoiler]

Thank you to everyone for playing. Being the direct sequel to my much larger project, Lithium, this really needed at least a release of what I have.
All times are UTC-06:00
Page 1 of 1