Discuss anything ZDoom-related that doesn't fall into one of the other categories.
37455 posts 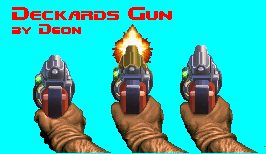 While I like the shape of it, when I put the weapon in the game it looks out of place with other custom weapons. I think it's something about those black lines being more prominent on Doom-style weapons. Can someone help me improve the sprite and DOOM-ify it, or give a useful suggestion what can be done to make it more Doomey?
Top

It does look a bit more Blake Stone than Doom, but I happen to like the cartoony science fiction aesthetic. I think what might help it, though, is it being lit more from the center rather than the right, since in-world light sources will be all over the place. Except when it fires; the flash should largely override other lighting. Or I think it should, anyway. I can still see that it is lit from the right in the middle sprite here, rather than from where the little explosion is.
Top

Yeah it looks quite contrast-y and bright-y, but sucha cool gun nonetheless!
Top

Thank you, it is some very sound advice! I really appreciate it, especially coming from legends like you.

So if I got it right:
- Darker palette
- Shift light source
- Fix gunflash to light gun differently from main light source.

This is what I got so far, is it an improvement or going in a wrong direction?

It's certainly much more Doomy. Though, as an obvious consequence, it has lost the cartoony Blake Stone sci-fi kitsch look. Both have their uses but I suspect the new, darker one is indeed much more useful.

Reminds me of Deckard's pistol in Blade Runner.
Top

It is exactly that pistol, based on 3d render from sketchfab
Top

Then, to me, that's worth a few bonus points alone. I love that film and that pistol.

Thank you for the encouragement. I've played some more with contrast and details, and I think I like it as is. Time to work on proper flash and reload sprites.
Top

And my first ever "my own gun from scratch" is done. Give me a birthday cake 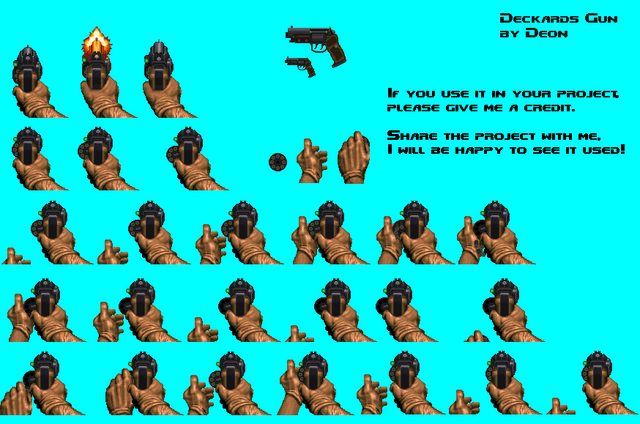 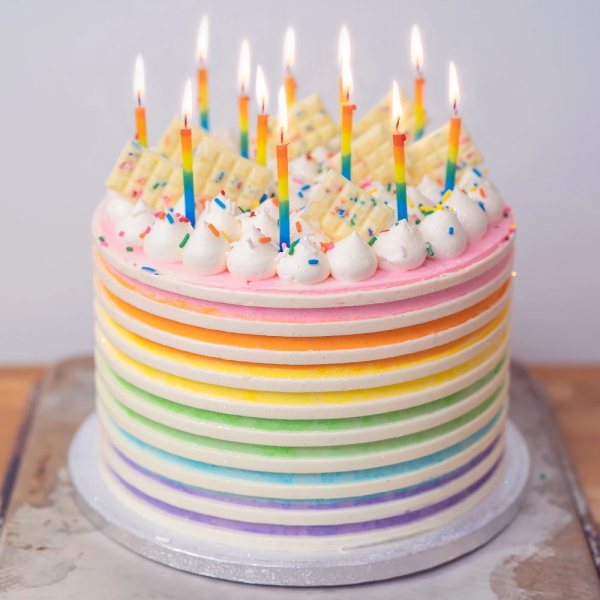 Thank you! That is a nice looking cake. Almost as good as the cake on some of old Scalliano's sprites.

If someone wants to get cut/offset sprites, you can get them in PK3 format in the description of my demo video

One improvement I can think of is spinning the bullet cilinder between shots.
Top

That's an awesome pistol Deon. I've only watched Blade Runner maybe once, but I know that gun from the first two Fallout games, which copied the design for the 223 pistol. (edit: the later games renamed it, 'That Gun')

I was digging through my sprite dump folder and found a little edit I did a while ago, might as well share it.

Just a sideview edit made from the recoil frame from obtic's BFG. I probably won't continue on it, but if anyone wants to use it for whatever they can go ahead.
Top

THERE is a gun I recognize, the Sonic P300 Booster. Very interesting to see that from another angle! I was one of evidently a few people who totally ripped off the flame thrower sprite from Obituary and put it into something else that got uploaded to the idgames archive, eons ago, annoying the guy who drew it originally, Thomas Möller, I believe. My custom additions weren't nearly this well-executed or noteworthy.
Top
37455 posts