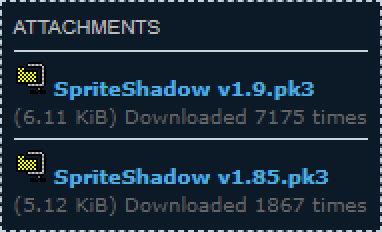 You do not have the required permissions to view the files attached to this post.
Last edited by Nash on Thu Sep 01, 2022 6:05 am, edited 43 times in total.
Top

I don't remember how it was in Duke3D, but if there's a ledge, won't part of the shadow end up hovering in the air?
Top

Honestly, making this work with EVERY actor may not actually be a good idea - not every actor will look good with this, resulting in weird things like shadows for fire on torches etc.
Top

Dumb question, but just to make sure, would it be all right if I nicked it for use in my own projects?
Top

Additionally, I'm not feeling too good about that hack I did to force the shadow to be drawn under the monster (that is, spawning the shadow -> spawning a copy of said monster -> destroying original/map-placed copy of monster, in that order)... o_O
Top

This looks very interesting! Hopefully you figure out a way to do this for everything.
Top

(and again, I am already doing a monster check in the WAD in the OP - this shadow won't appear on the player, even if you give yourself the item - it will only appear on monsters)
Top

looks great! this is something that I felt should always been apart of zdoom. nice to see it done with such skill
Top

Monsters that disappear when dying (Lost Soul, Pain Elemental) will leave their shadows behind despite their corpse not existing anymore. Will be fixed for next version
Top
184 posts