Enjay wrote:For number 2, if I understand your description correctly, I think these buttons on the tool bar are what you are looking for:

Maybe? I'm just saying that when you drag geometry around (maybe only in certain cases?) it breaks up sectors with multiple polygons (joined sectors) into multiple sectors.
Top

The auto-completion list in the script editor is nice for remembering a function name occasionally, but the auto part is very naughty. When I type "Else" on a line by itself and hit enter, I mean "Else" and not "else", Geez!

It also blocks tab and home/end while visible. These keys are meaningful for text navigation and it really shouldn't be so needy.

I was also bitten again very recently by polyobject spots losing their >360 angle when mass-moved. I think this needs a thing configuration setting to override that fix for certain things.
Top

I'm having issues with vertices mode.

While in that mode it randomly exits it while making vertices in the map. I'm not sure if this issue applies to other modes but have noticed it on this one most often.

EDIT: I meant the mode itself, not the builder.
Top

There is an issue on Linux (mono): UDB cannot read gzdoom.pk3 if it is located outside the 'fake' filesystem.

Is there anything that could be done about this, other than resorting to a hard link (which has its own problems as the file would have root owner but be in the user filespace)?

EDIT: Also in the script editor, syntax highlighting doesn't occur, there are no scrollbars and when scrolling down with mouse wheel, lines brought into the window are underlined; plus, the editor stays on top of all windows (at least in Cinnamon) unless minimised, not just UDB's windows. Again, not that serious (I tend to use my preferred text editor for scripts), but worth mentioning.

EDIT2: This is a feature request mostly to help people mapping for Doom 1/Ultimate Doom: is there any way to put in an option in UDB to simply not show, in the things chooser, any things with "0=<ClassName>" in the DoomEdNums section of MAPINFO? That declaration says to GZDoom "remove any things with this doomednum from the map", and it would be helpful if UDB recognised it as well (not only when editing for Doom1/UD, to prevent redundant warnings about missing sprites for Doom2 derived actors in gzdoom.pk3) but also to declutter the things chooser menu when mapping and knowing that some things will never be used in the map, e.g., stealth monsters).
Top

Using this dialogue, I can set the coloour of a sector (in this case, I want to set the colour of the ceiling glow. 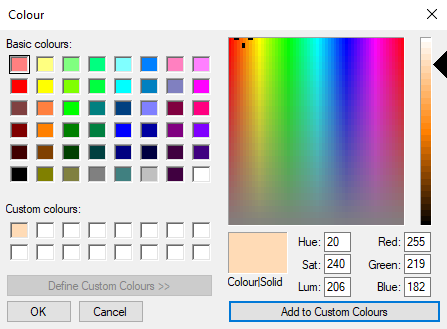 So, how do I make defined custom colours "sticky"?
Top

It's a standard Windows dialog, IIRC it disables the "define" button once you use it to expand out the right half. Remembering colors probably involves arcane rituals with the common dialog DLL. Most programs I see it in these days have the same issue.

Anyhow, you can at least copy the color's hex code in the property window and paste it in for each sector.
Top

The custom colors in the dialog are saved in the latest version.


NeuralStunner wrote:Remembering colors probably involves arcane rituals with the common dialog DLL. Most programs I see it in these days have the same issue.

It's actually surprisingly simple. The colors are just an array of 16 ints. All you have to do is to save the contents of this array somewhere, then read it next time and fill this array again.
Top

Thank you. I got the update late last night so haven't had time to check. Are the custom values saved universally or are they specific to a project or even for one specific map config?
Top

They are stored globally in UDBuilder.cfg. There are pros and cons for storing them globally or on a per map basis (there are no facilities to store them on a project basis). The reason why I went with storing them globally is because I it'd probably be more confusing when the colors are gone in a new map "without explanation". The default color picker can only store those 16 custom numbers, ideally there'd be a custom color picker (similar to the one used for lights) and can define both global and per map colors. But considering you were the first one to complain about custom colors not working in half a decade or so this feature doesn't really seem to be used and thus frankly not worth putting any (more) time into it. If anyone really wants it: as always we're accepting pull requests

I was trying to weigh up in my head which would be better myself and came to the same conclusion, for the same reasons.

I have about 6 colours that I use a lot and I use them for both lights and for sector colouring (the most commonly used one is a colour that I think makes sense for rooms "lit" with the slightly beige/orangey tint that I feel would come from a light the same colour as the TLITE flats). So the capacity is definitely enough for me right now.

Thanks once again.
Top

I have an unusual bug, if it is a bug. I was writing a script for random monster spawning. It was my first script using an array, but not my first spawning monsters. It wouldn't spawn, so I double checked everything. The script was right, map spawns, tags, etc. It jus' wouldn't spawn anything. I even opened an old practice map, and it wouldn't spawn, no matter what Spawn action I tried. Not only that but the sector I lowered in script won't raise back up. The script called for a ceiling to lower then raise back up, but it won't raise. I can script another ceiling to raise, but not one I've lowered. I can't fathom why it won't work, so I am convinced it's a bug. So am I alone or has this happened to anyone recently?
Top

No, because it worked in GZDoom.
Top

No, because it worked in GZDoom.

So... everything is fine?
Top

This isn't goin' well... No, it's not fine, because I can't design levels in GZDoom. That was jus' confirms my script WAS right but UDB isn't running it correctly and I was attempting to isolate the bug, and now I'm seeking advice or assistance of some sort, if possible.
Top
842 posts