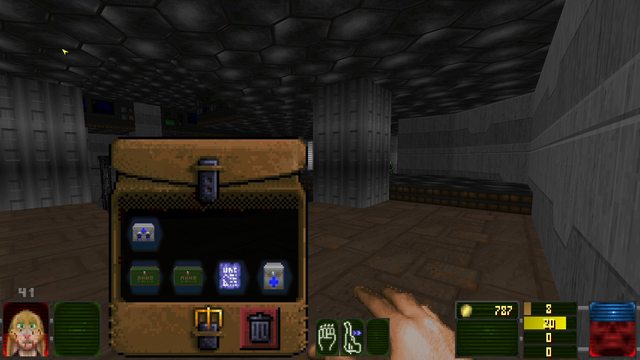 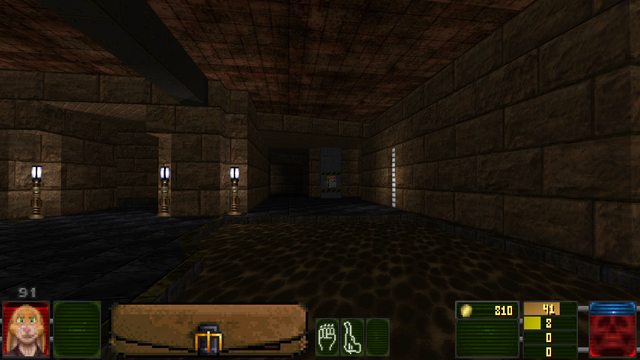 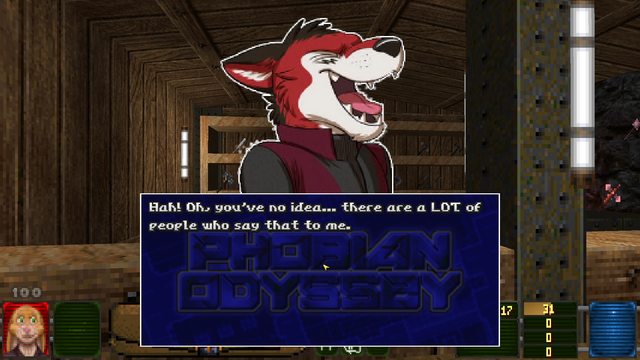 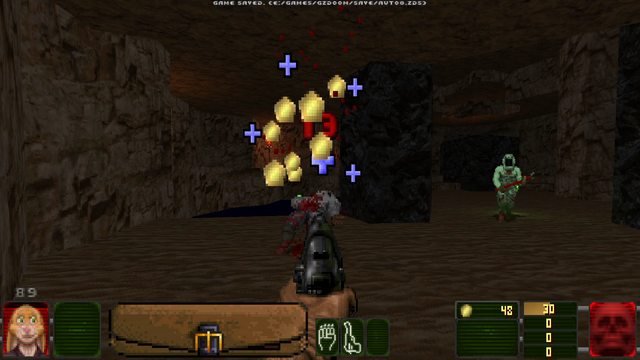 For NaNoWADMo this year, I wanted to do something a bit different and experiment to see if I could get a dungeon crawler style movement engine working in GZDoom. Then it snowballed until I'd accidentally written a whole JRPG style game in it. This was a great way to finally dive into ZScript and see what it could do

So venture through the caves, tunnels and labs underneath Tharotia as you try to eradicate the demons! This copy has five and a half levels of dungeons, and lets you try out the cycle of the game, fighting monsters in FPS battles and scavenging materials and treasures. As the name suggests, it's heavily inspired by Etrian Odyssey, the series of W/JRPG hybrids that managed to revive first person dungeon crawling without it being coma-inducingly boring.

I'd love to work this up into a full game some day because I wrote a ton of stuff that I didn't even use, like being able to apply special effects and elements to weapons - perhaps I will revisit it if enough people enjoy it!

Runs on GZDoom with DOOM2.WAD or equivalent, and I recommend Xaser's DamNums to complete the JRPG mood

Thanks to
Scwiba/Ryath for NaNoWADMo
Ezo, Ginji, LikoClave and Boomer Spacely for the use of their characters
Temiree, LikoClave, Jan, Licographics and OhMyRichard for the portrait artwork
Ukiro for OTEX
James Paddock as usual for the music
JPBreton for the amazing Mr Friendly, from which I borrowed a significant amount of code
Everyone on the GZDoom Discord for their guidance as I found my way in ZScript!

by spoone
I really enjoyed it.

by Enjay
It took me a moment to realise how the movement worked but once it clicked, it made sense. It's unusual to be able to look all around but still have the block-step movement of EOB and similar.

Definitely good fun and entertaining but I found that the encounters were a bit too frequent for my tastes and, after a while, they felt like they were getting in the way rather than enhancing play.

Definitely a fun and original idea though and well implemented.

[edit] Oh, perhaps worth mentioning - the status bar fell off the edges of my screen (I could only see abut half of the mugshot). Possibly something to do with the scaling factors I use but I did try changing them with no real effect. I didn't investigate fully. 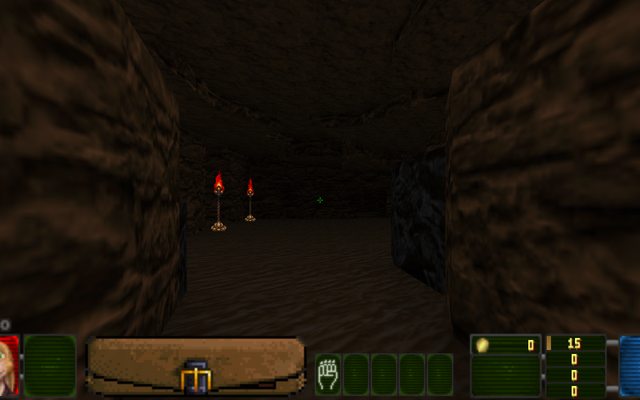 by DavidN
Thanks so much for trying it out! I actually realized the same thing about the encounters and adjusted them down quietly after you posted that - in my testing I was wanting to get a lot of encounters to test them, but thinking about it from normal gameplay, they were too frequent.

The HUD is designed for 16:9 widescreen, but I might be able to adjust it to be narrower!

by Karl515
Great idea, Fantastic execution. Just thinking about the coding to achieve the grid-based movement and randomized(?) encounters makes me shudder. However, while I was playing the demo, I felt conflicted. We have this cave system full of treasures and traps, while the items, enemies, and weaponry are very modernized. Wouldn't it make more sense to have a medieval themed arsenal as well? But then again, this is a demo and changes will surely occur. Anyways, I'm thoroughly impressed and I'll be keeping an eye for updates.

Enjay wrote:It took me a moment to realise how the movement worked but once it clicked, it made sense. It's unusual to be able to look all around but still have the block-step movement of EOB and similar.

Kind of like Cryo's "Omni3D" games, except this is not "cheating" with a pre-rendered graphic bubble.

by dard98
Damn, finally someone thought about making a mod with a gameplay more resembling RPG. Wish someone made an JRPG like gameplay mod. Still, can't wait for a full release.

by Jarewill
Oh damn, this is soooo cool!
I love classic dungeon crawlers and the battles actually being the classic Doom gameplay is such a great idea.
Thanks for the automap mode too, because my dumb self would get lost easily without it.
I had a few issues though: 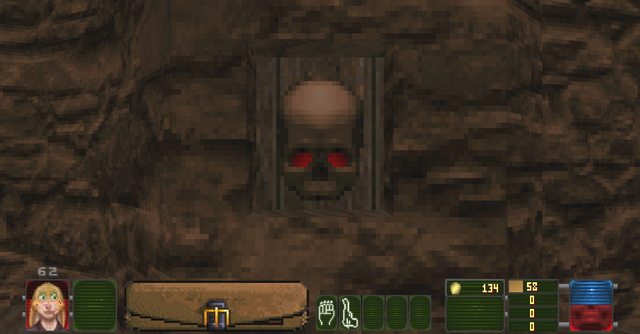 I got an encounter just as I interacted with this button, which skipped the text and I was unable to read it.
It could use a check to prevent interaction when the player encounters a monster and/or repeatable interactions. 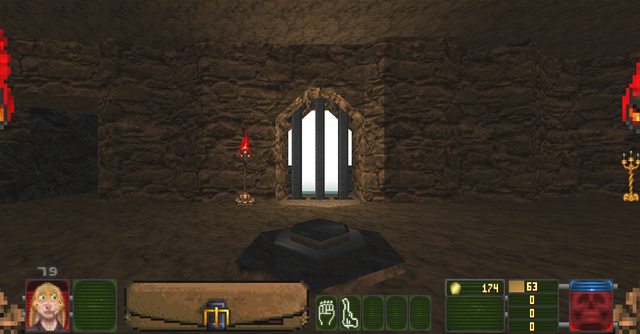 Stepping on this button causes a VM abort:

I realise that it's the end of the demo, but there are better ways to end it than to error out to console.

This is a really good project so far and I'll look forward to seeing it complete!

Also the battle music is so good.

Is there a link to it so I can listen to it outside the game?

by Captain J
Holy shi... Wow. This is exactly like Doom meets JRPG and i did not expect how it goes. Seamless Random Encounters, Inventory managements, Dialogues and etc. If ID ever released Doom RPG by themselves on the MS-DOS instead of on Mobile, this might've been just like this one. Excellent work!

Spoiler: And of course i had to write feedback on some of my perspective
- Someone already mentioned this but you do get an encounter when the dialogue pop's up. You have to skip every last part of it to survive and that's rather rough.

- I wanna be frank here but... I'm not a big fan of Fireball trap. Despite the Fireballs travel so slow, they're still enough of a threat to catch me off guard. I think the player's input speed in overworld is slow so it makes the simple task a bit more complicated, but just saying.

- If you're considering to make the player start without having automap in the next update or final release, i'd be awkward because the first map itself is like a maze and had the weird area with four skull switches that i can't even activate. Automap really helped me on this one.

- About random encounter, it happens quite frequently especially for a second map. Also wish i could get all the items enemy dropped above the tower in the arena.

And that's about it. I didn't expect the end of it and it made me chuckle. I see what you did there!

by DavidN
Updated the original post with a new demo! I'm calling this "episode 1" and it includes the first two and a half dungeons of the game. Thanks again for everyone helping me get off the ground with ZScript and finally doing a completely new game in GZDoom like this

by Zhs2
Pretty cool concept, but the grid-based movement is just as slow as everyone else in this thread has mentioned. I get what you were going for, and I see you've implemented FOEs to go along with it, but it'd be nice if the town wasn't a grid, at least. It's a bit too late to suggest slowing the player down to walk speed and having FOEs move relative to the speed of the player's current velocity length. And the grid automap is kind of useless right now, but hopefully in the future you'll have refined it a bit so that grid squares that you can step on or have stepped on show up on the map instead of a giant featureless square of squares. The combat and inventory system is solid though, both are nice! Though it would be nice if it was explained in game that you can use slot keys to activate inventory items while the inventory is open, I figured that out by accident and it's nice to know about convenience keys.

Related inventory bug: if you use a homing device while in town, it breaks the music.

And I get that dialogue screens are actually a menu internally, but you can't open up the console while in a dialogue.

by DavidN
Thanks for identifying those problems - I completely forgot that I had implemented the 1/2/3/4 keys for using the inventory!

To adjust walking speed for now, you could try the debug/cheat:

Spoiler: Feedback time!
- Sorry to report this grave issue but when i open my inventory and pick one of the items during any transmission, the item i picked disappears from inventory forever.

- Fist play no punching sound when i literally punching the enemy. Was this intentional?

- I see that bullet decals don't exist and i think it's good because it makes each arena fight seamless. But decals of Imp and Darkling's Fireball and Blood Splat are still there tho

- The Automap on standard mode shows nothing but an empty checkerboard. Is this unfinished? 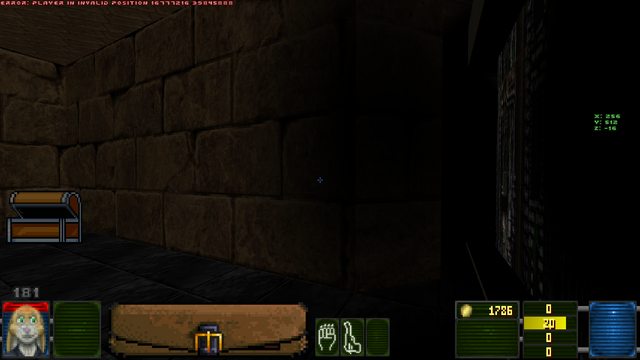 - When i move to this way at the place where i get Soulsphere, i teleport back and displays an error message. 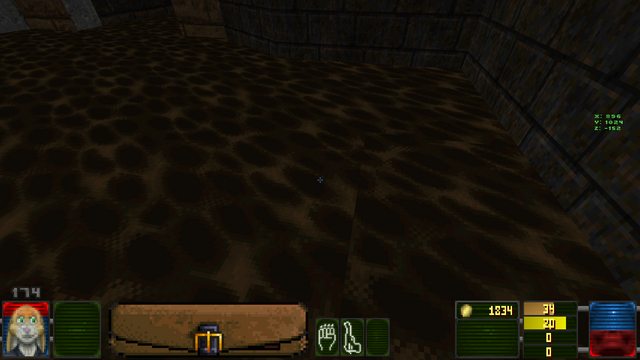 - This sludge flat is misaligned there.

Very neat and decent update. I really liked the full interactions of the Village! Tho i couldn't enter the other side of Boss area but guess it's still being worked on so no biggies. I'll keep looking forward to this project!

by wildweasel
I definitely like the concept of random encounters being handled as normal Doom-style action combat! There's only two things that I found a bit annoying, though: the battle music is too loud compared to the normal wandering music (I could just as easily make an add-on to swap out the music though if I wanted to), and the player's facing direction is incorrectly remembered when you leave a battle, making it easy to get turned around by accident.

I played long enough to reach town, at least; I like what I see and look forward to seeing it progress further.

by ramon.dexter
Wow, this is an impressive piece of work. I never thought it is actually possible to make a tile based movement in gzdoom! Pretty nice. And the encounters, just like in old RPGs. Great job, man!
All times are UTC-06:00
Page 1 of 1