So i played the demo! There's to many compliments to list them all out, so here's a couple of my criticisms:

- Health pickups seem a lot rarer now. You can't really go on the offensive anymore, since i've managed to go whole rounds without finding a single one.
- I think that grease is the world is a little excessive. Combined with the rarer health items, which are now nearly impossible to pick up with no friction, it can be a death sentence.
- The moon gravity feels... underwhelming? I think it would be a more interesting slot if you lowered the gravity further.
Top

Spoiler: more feedback incoming.
- So the Slug Shotgun is very beefy, strong and accurate. But honestly i'm not really a big fan of the delay before firing. Granted, it's powerful and accurate. But again, it's an accurate weapon. So you have to make every shot count or it'll miss the target. To make your shot count in serious reelism firefight, you aim at the moving target for a short period of time. But this delay... I don't know man. Feels like Railgun is much faster and efficient than it.

- Quake 1 Zombies are slow but deals SERIOUS amount of damage. It's just a rotting gore giblet being thrown but it's powerful enough to kill you in one or two hits already. Isn't having Ogre enough? 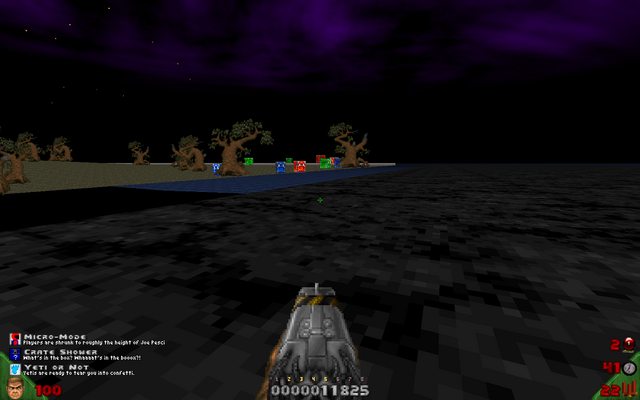 - Gutrot Island has invisible sidewalk texture, at the park. 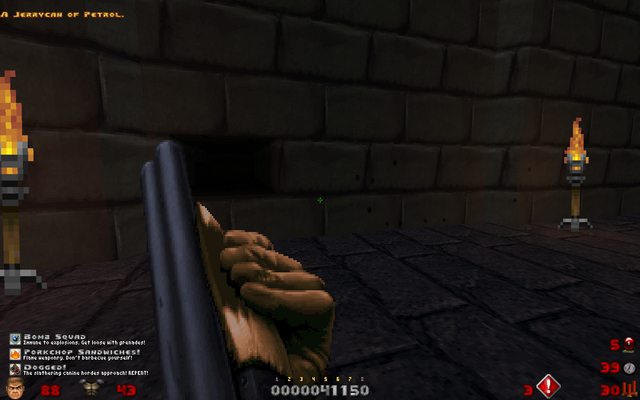 - So i've found this hole at the castle map, but it's just empty. Unfinished? 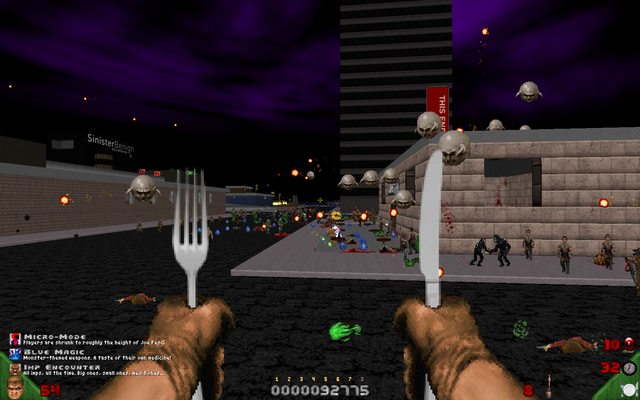 - So i can't destroy the props like the table anymore. What's the big idea? 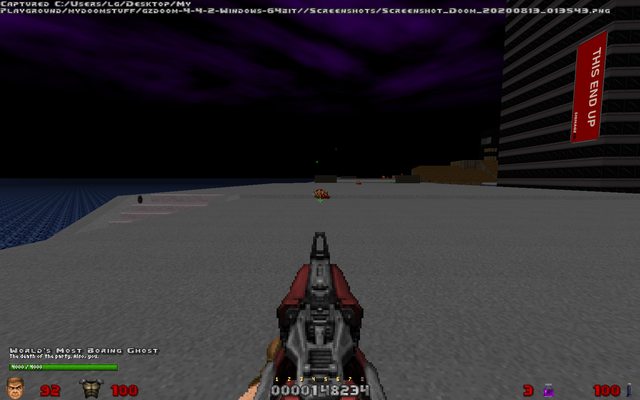 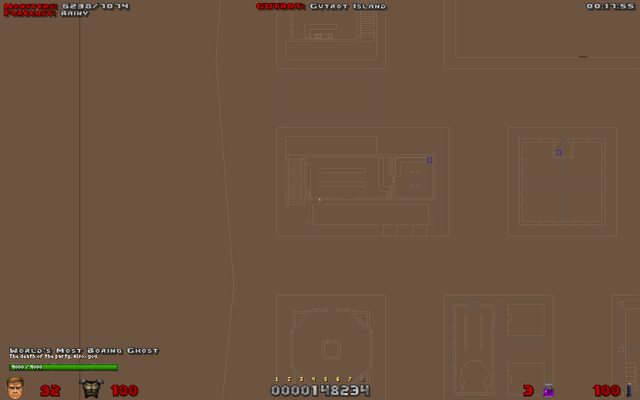 - The top of this building at the Gutrot Island has some kind of invisible wall.

eltiolavara9 wrote:edit: also having to wait a few seconds to retry after dying is kind of annoying after a while imo

For some reason, yeah. I can't click to skip the post mortem quickly. So my recommendation is just go for the manual menu select.

Arctangent wrote:this is, without a doubt, the world's #1 melissophobia simulator

Plus Cynophobia. BELIEVE ME.
Top

I'm not immediately commenting on a lot of the feedback because I want to stack it all up so I can tackle it at once (I greatly appreciate it!) but I'll tackle this one real quick:

Captain J wrote:- So i've found this hole at the castle map, but it's just empty. Unfinished?

No, it's a shortcut for rats and other rat-sized things.
Top

Gothic wrote: Also Pie in the Sky is proof that the Football weapon needs to have a brake function.

you can "brake" it, it's just your mouse sensitivity is really decreased so you have to start frantically sliding it to crash into a wall and stop
Top

there are no walls in Pie in the Sky until over half-way through when the slices start sliding around, and even that's random and thus not reliable. That's the problem.
Top

This mod rules so far and I have no complaints! Its frantic and fast and the variety present even now is really interesting to me! Love the sidequesty stuff you can do in the town as well. The only things I would suggest are more ranged options in the Sports Reel (maybe firing baseballs with the slugger as an alt-fire or something) and maybe a Food themed Reel so I can get the Cutlery without having to buy it in the town

Can you please let us dribble the b-ball by reloading also? This is highly important.
Top

So Napalm Launcher is powerful and bigger now. But for some reason, the projectile moves slowly and consumes 20 gasoline ammo. It looks reasonable but it's in fact, not if you fire it a few times.

And what's up with the Peasants deal the same damage as Beggars? It's rather confusing now and just trivializes melee weapons.
Top

Is there a mirror for the download? It keeps downloading like 0.000002% of a mb at a time and then saying "File Incomplete".

EDIT: Got it. Few things are as fun as Gunfinity and the Basketball weapon.
Last edited by Captain Ventris on Thu Aug 13, 2020 6:54 pm, edited 1 time in total.
Top

So, are the handpuppets replacements for

I find it pretty damn hard to find health, as I did with Reelism 1. Tempted to ask for a reel 1 or reel 2 effect that causes enemies to drop healthbonuses on death.

Alternatively, you could add a fourth kind of spawnpoint, and move the health/armor items to that spawnpoint (color-coded green, since red, blue, and yellow are already taken). I feel like a large part of the reason health and armor is so hard to get is because it's in the same spawn pool as every other non-weapon object in the game, and since there's so goddamn many non-health/non-armor items compared to exactly one health and armor pickup at any given time, you're far more likely to get something like Grenades or the Pogo or even just a score item than you are to get health or armor. (I got nothin' against the pogo, it just doesn't save me when I'm at 4 HP.)
Top 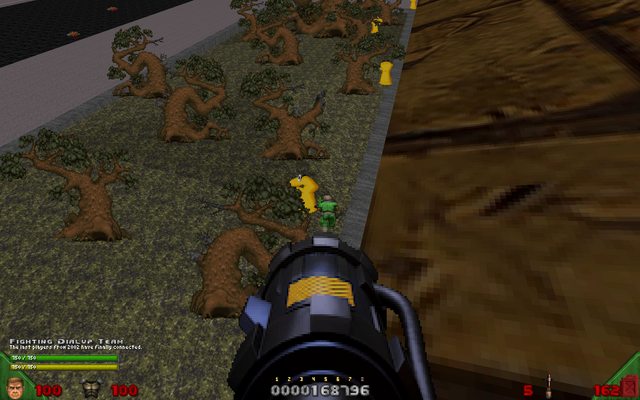 - Let's talk about these Blyat Tri-Stars. They're small and share the same sprite as you, just like Player 2 Boss from the previous game. And because of that, they do get stuck often because of both props and the enemies. And speaking of the enemies, they rather get easily blend in and you really have to depend on your ears, not eyes.

And actually, i'm consider making alternative reskin addon for them. But maybe later. 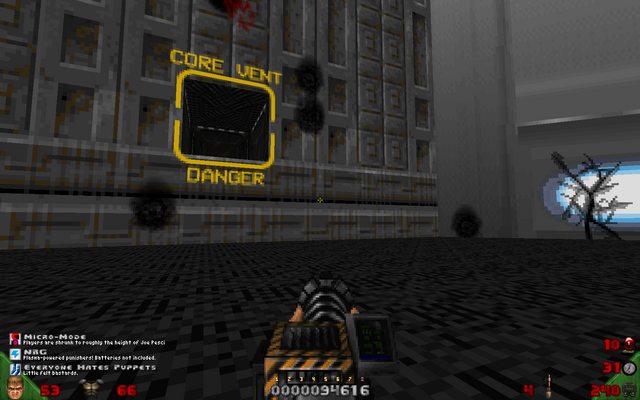 - I can't get inside of this vent. Even though i'm micro now i just can't.

You can't, but other things can...
Top

Spoiler:
Not gonna lie, I've used that vent as my final "fuck you" when it's obvious i'm about to lose a match. It's pretty great.

I would love more maps to have things like this.