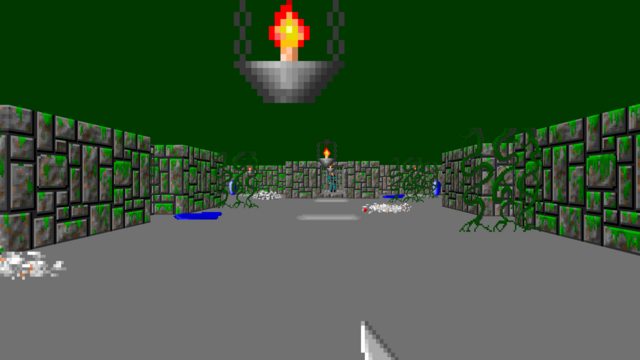 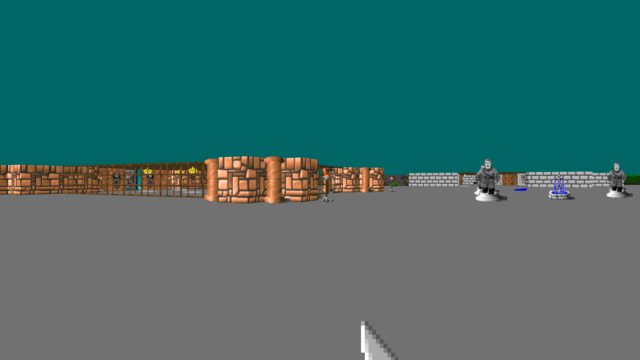 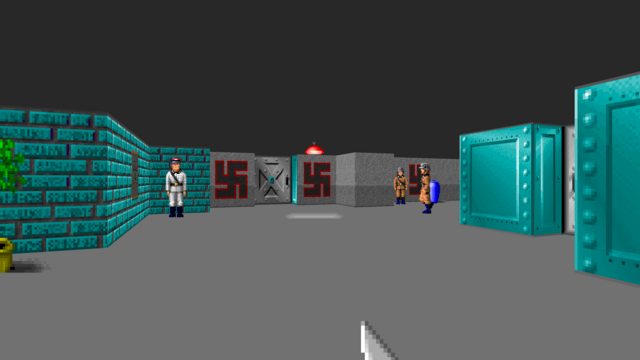 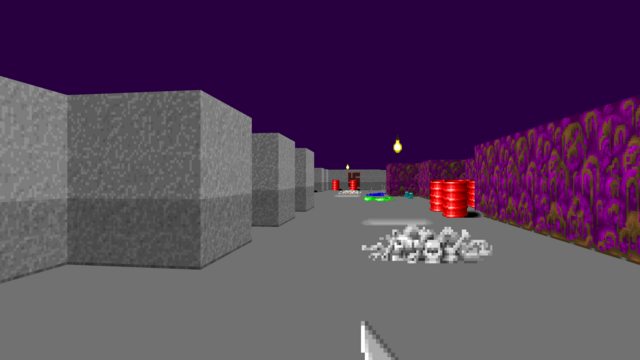 I am proud to present the beta of Wolfenstein Missions Second Encounter, the second of three releases of Wolfenstein Missions. This release features 22 19 levels, 18 normal and 1 secret, covering four of the mod's six planned units. Wolfenstein Missions is my ultimate statement as a level designer so far, into which I have poured all of my knowledge, skill, and passion into something that looks and feels like the original Wolfenstein but deeper, bigger, bolder, more complex, and harder. The gameplay of Wolfenstein Missions massively expands on the original range of enemies, weapons, and other elements in Wolfenstein 3D, but in a cohesive, self-contained way; it is meant to be a fully balanced and finely tuned game in its own right, not just extra stuff grafted on top of the existing game. The first two Coffee Break episdoes were essentially a trial run for this, my attempt to harness the power of ECWolf to reinvent Wolf3D for the modern retro-FPS renaissance while sacrificing none of what made veteran Wolf3D players fall in love with it to begin with.

Wolfenstein Missions' difficulty levels make it suitable for gamers of all skill levels. The first few maps may seem as easy as Id's early work, but the later maps on Death Incarnate skill are playgrounds for the Wolfenstein gods, grueling tests of skill, courage, reflexes, and strategy that will test even the most seasoned Wolfers. For everyone else, player damage on skills below Death Incarnate is reduced to 62.5%, equivalent to the Macintosh version of Wolf3D, and the difficulty level Ultra-Violence has been added between Bring 'Em On and Death Incarnate. Like its Doom namesake, Ultra-Violence emphasizes speed, with a slightly more forgiving damage model greatly increasing the pace of gameplay and reducing the importance of camping and kiting.

Wolfenstein Missions' enemy and weapon roster are far more varied than Wolfenstein 3D, with enemies providing a variety of different types of threats at different ranges, and each possessing a distinctive appearance and behavior--no plain recolors or number tweaks, new enemies that do new things and present new challenges. Likewise, the new weapons have strengths and weaknesses totally different from the basic Wolf3D weapons, and these elements work together to give you a much broader array of options to tackle bigger, tougher, and more complex fights than the original game could possibly handle.

The levels start modest and similar to vanilla Wolf3D, but grow in size and complexity as the mod unfolds. Before long you'll be watching walls move and transform, fighting your way out of terrifying dynamic traps, and stepping into teleporters to be whisked off to parts unknown, all the while looking at an enormous variety of textures and themes, some familiar, some entirely new, and all of them fitting seamlessly into Wolf3D's cartoony EGA-to-VGA aesthetic. In addition to some added music based on MIDIs by musicians from the Doom community, many of the existing IMFs in the Wolf3D soundtrack have been remixed and remastered by AstroCreep to match the style of his arrangements of the MIDI based tracks, furthering the aesthetic unity of the experience.

The three secret levels aren't ready yet, I hope to get the secret levels complete soon, especially a certain "out-there" map many of you have already seen screenshots of...
Last edited by Woolie Wool on Tue Dec 24, 2019 2:44 pm, edited 1 time in total.
Top

Looked at this briefly last night. Looks, sounds and plays fantastically, and anyone who likes old-school Wolf needs to give this a whirl.

The lack of a new title screen graphic was a bit odd, though (I'll see if I can whip something up), and the Help screen doesn't mention the new Ultra-Violence difficulty during its skill explanations bit.
Top

Looks great! It's been many years since I've played Wolf3D mods and this may be an excellent opportunity to get back into them. Albeit unrelated, do you have any other recommendations for mods?
Top

ECWolf's modding community is still kind of in that embryonic stage ZDoom was around 2003 or so, but AstroCreep has made several ECWolf mods of gradually increasing quality. I also have a number of ports of high-quality mods from the DOS era in my ECWolf Classics Collection.

I felt like Wolfenstein Missions needed more of its own graphical identity since the pure "vanilla plus" look didn't seem to turn that many heads. I hope the new palette, floor color, and interface rectify that problem: 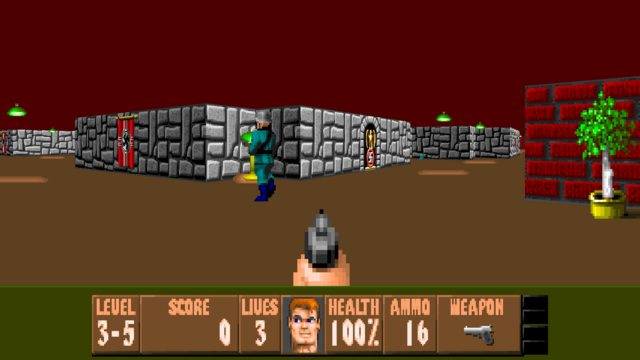 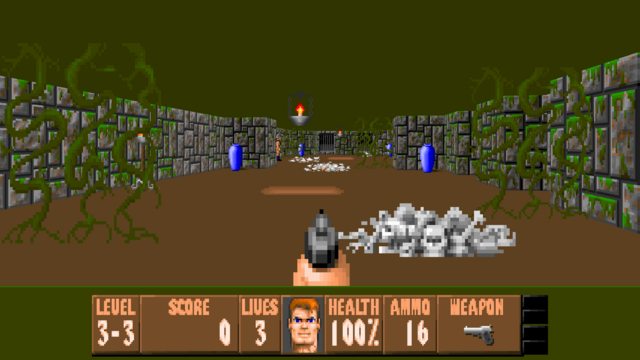 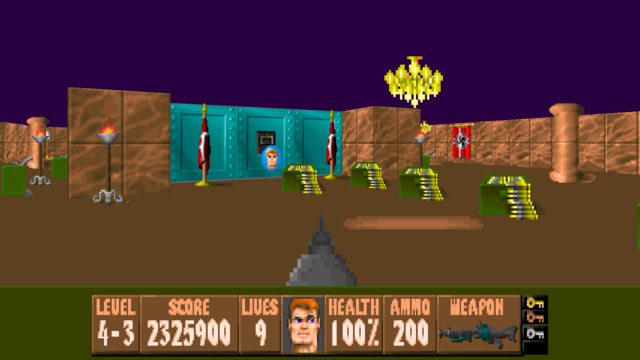 Hopefully I can have a new beta with the graphical changes by Christmas.
Top

I made a wolfenstein 3d mod a long time ago called The Third Reich Episode 1: A Dark Secret, together with WSJ, but unfortunately I don't think the source code was ever released anywhere (I myself don't have it, but perhaps WSJ might).

Those shots look great, although with as much detail as you have added, having proper floor/ceiling textures may at this point be in order. It doesn't sour the experience for me but like you said, it could bring in a lot of new recruits.

Oh and, naturally, thanks for the links!
Top

Woolie's done a lot of mods with all the visual trimmings like Operation Serpent and Wolf3D Cosmetic Upgrade, so the whole thing with this looking like a throwback is very intentional.
Top

Woolie's done a lot of mods with all the visual trimmings like Operation Serpent and Wolf3D Cosmetic Upgrade, so the whole thing with this looking like a throwback is very intentional.

Atmosphere is everything and the floor ceiling colors go great with the style of this mod. Also, the Mac/snes style palette makes things look much..grungier? Idk the proper term im looking for but it’s great.
Top

Woolie's done a lot of mods with all the visual trimmings like Operation Serpent and Wolf3D Cosmetic Upgrade, so the whole thing with this looking like a throwback is very intentional.

Yeah, definitely. Wolfenstein Missions is meant to look and feel like 1992, I even limited the custom sounds to 7042 Hz and imported tons of AdLib sounds from other Wolf engine games to make it feel more authentic, just like Coffee Break. However, Wolfenstein Missions is also a nod to the SNES/Jaguar/Mac family, which I think was very successful in melding the serialized, shareware Wolfenstein into a cohesive, singular console experience, far more than most of the console Doom ports, and so I eventually decided to take the best of both halves and combine PC and "console" Wolfenstein visually, as well, into a singular, coherent visual identity. Hence this new, grimy, earth-tone look and feel that I'm absolutely in love with.

[imgur]https://i.imgur.com/FqSUeaR[/imgur]
[imgur]https://i.imgur.com/65AaWxf[/imgur]
[imgur]https://i.imgur.com/4tFpZ6O[/imgur]
Download beta 2
Because the new brown-floor assets are not entirely complete yet, Beta 2 uses three files. Load brnfloor.wad FIRST, then wolfmissions_2nd.pk3, then brnstatics.pk3, to get correct results. This beta can be played with the original graphics by loading wolfmissions_2nd.pk3 alone. This is a temporary measure; the brown floor assets will be merged into the main file sometime in the near future. This will likely be your last chance to play it with the old look! A new map31, "White Privilege" is now accessible from map02 via the secret elevator. The former map31 has been moved up to map32.
Top
9 posts • Page 1 of 1