by Tormentor667
I am glad that this isn't dead. I am a big fan of the simulator, so keep it going please. The new features are awesome

by morb
rush b

by undeadmonk354
Aah, so that's where the Fighting Dialup Team is playing.

by Captain J
The new map wasn't so lame at all! Because lameduke has the word lame on it, but it's just misreading.

And i've enjoyed beating all the maps again, i would like to talk about some glitches plus suggestions.

Spoiler:
- So i'm actually seeing the ninja enemy. But for some reason he's bouncing all around the battlefield and collecting all the ammo. Is he a melee enemy looking for a good moment to strike? Because i never got killed by him. The purpose is just stealing?

- I see the NPCs running around the wall and Duke is still kicking at it again. It mostly happens in FDM05 where the Icon of Sin is and the game has freshly started. I'd like to see them a bit more aggressive to each other. 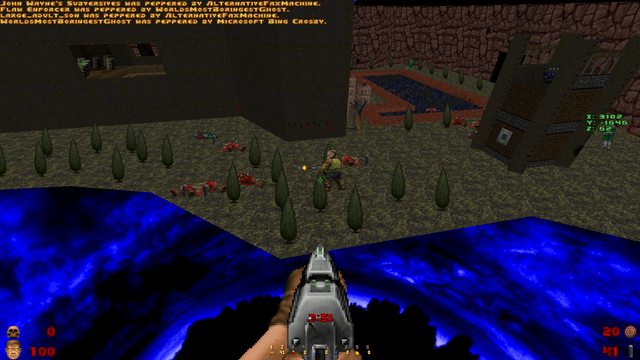 - Tree props in FDM02 are guaranteed to block you, and your shot. It gets quite embarrassing if they're too many and you have projectile-based weapons.

- Explosive Barrels would bleed particles if you set Blood Type to Sprites & Particles. Yeah, you can manually turn if off but that means i get to see no extra blood...

- Grenades disappears on watery terrain. I really don't want to believe that it was intentional. Grenade Launcher is one hell of a useful weapon.


And here are some Suggestions for Quality of Life Improvement to pick some of yo favs:

- Obituaries' font colors are all the same except when the NPCs killed me. No, of course i can set the colors of the fonts at HUD options. But i mean the player's name. If the battle becomes tense, my kill texts would get covered by other NPC ones.

- So i somehow killed three enemies at once with my Railgun. Is there will be any fancy sound effects or fanfare after killing multiple enemies one at a time?

- I would like to see some Skulltag features in here, especially the announcer telling me you're almost close to the victory. 99.9% of me winning the round in this TC was like "Wait, what? I won? I killed enemies that fast? Kinda underwhelming..."

- The Server List is rather empty. Expected some servers running by real Gamers and Boomers, you know? But really tho, would be nice if i could select each map instead of using the console manually.

- The reward after killing enemies like Duke, Santa, Fatso and Quake Ranger must be a bit merciful to be honest. They drop a bit of ammo like the rest of NPCs and Duke drops nothing at all.

- I would like to see the extra potential of Timesphere more than just granting me an extra time. Weak NPCs such as Zombiemen and Imps really are a walking bullet sponge to the point i take advantage of them to win the game.

Overall, very neat update overall! I do hope this TC would get a lot of community maps because we need em

by Kinsie
Thanks for the feedback. To address a couple of things:

Captain J wrote:So i'm actually seeing the ninja enemy. But for some reason he's bouncing all around the battlefield and collecting all the ammo. Is he a melee enemy looking for a good moment to strike? Because i never got killed by him. The purpose is just stealing?

The ninja is an avowed pacifist, and their sole purpose in life is to steal all the items before you can use them. If you kill them, they drop any weapons they had on them. At some point I'll extend this a bit further to make them a bit more pinata-y (and more satisfying to finally nail).


I see the NPCs running around the wall and Duke is still kicking at it again. It mostly happens in FDM05 where the Icon of Sin is and the game has freshly started. I'd like to see them a bit more aggressive to each other.

Duke kicking walls is entirely intentional. It's a nod to the "Fake AI" bots in Duke3D Atomic Edition. I'm open to ways to make the monsters a bit more proactive, but it's not necessarily the easiest thing.

by Ezper
I have a problem, this mod isn't compatible with LZdoom

( my phone just lags so much when I use GZdoom (version that is compatible with DM sim) I hope this will be compatible soon. Also, I suggest making it mod friendly, for example, being able to use Call Of Doom weapon mod. Thanks!

by StraightWhiteMan
This is really fun to play with the Bourgeois Deathmatch Megawad, but it doesn't spawn the Additional weapons when doing so. Still extremely fun though and recommend everyone giving it a shot.

by yum13241
This is awesome to play. But one thing I find annoying is the lack of configuration. Basic things exist, but it would be cool if we say, prevent quakeguys from spawning for example, or only allow quakeguys. I also think some monsters should be worth more frags than others. The cyberbaron should be worth more than the zombieman. But some may not like this, so maybe make it configurable? Other than that, awesome mod, keep it up.