by Captain J
Recently played this game to the end. It was fun, clever and gave me the chill that every contents in this game are definitely familiar. Fun stuff! I guess fandom got worse and worse nowadays, hmm? Hope nobody gets upset about this TC. I mean, it's just fun and oooobviously innocent!

So, is this TC being updated? Because i found some awkward things during gameplay;

Spoiler:
- The Discourse skill warp sends you back to hard warp area. I thought it's okay to walk onto hard warp, but nope. Enemy's behavior had no difference, as far as my experience goes. Is Discourse Warp actually works? Or should i do something more to enter?

- Trash Bag and plush props spawns red blood puff. I guess that's intentional? Because i can smell the possibility.

- Speaking of Blood puff, it's barely visible and small to see. Definitely hard to tell if my shot actually hit the enemy unless they goes pain state.

- Minor Gripe, but can we have usefail sound effect? I have no clue when i'm touching doors, switches and walls because there's no sound. Yes, i like finding secrets and explore more!

- AXX Spray is kinda awkward to use; It instantly kills me when throwing it closer, its smoke seems doesn't affect further and ultimately, it moves way too slow. But the damage is effective, tho. But cannot be helped from it being a double-edged sword.

-
asd.PNG
The handle is just Billowed on the floor, in bombed out bus from Full Stop.

- Jack-n-Jill Pepper makes you never crouch until it's all worn out. So you're temporarily stuck when you're using this in the vent or something.

- Minigun with Jack-n-Jill Pepper upgrade fires slower than itself without upgrade. I know it has no slow-start at the beginning, but it acts just like upgraded pistol IMO.

- The Arena fight after destroying transmitter seems discontinued in few levels. I liked the idea of fighting enemies in small area, though.

-
asd2.PNG
Some open places like this is a secret area. Sounds very obvious. Don't you think?

- Sentry guns in some map sometimes does nothing at all. They're hostile, sure. But there are some nice ones too?

- Troll Blood weapon seems very ineffective against stronger enemies. But can it at least have fine damage to them instead?

- Trollsona enemy's projectile doesn't effect me anything. Is her attack suppose to make me a grub or something?

And that's about it. And i heard that you're working on its sequel as well. Really can't wait!

by SanyaWaffles
I'm gonna address some of the more serious glitches here shortly.


- The Discourse skill warp sends you back to hard warp area. I thought it's okay to walk onto hard warp, but nope. Enemy's behavior had no difference, as far as my experience goes. Is Discourse Warp actually works? Or should i do something more to enter?

It does do a few things differently. Aggression is maxed out, cheats are disabled, that sort of thing. I guess I could make monsters faster but some people did report Discourse being very difficult... especially with some game breaking bugs I didn't know of until some people played through it.


- Speaking of Blood puff, it's barely visible and small to see. Definitely hard to tell if my shot actually hit the enemy unless they goes pain state.

I'll see about making the blood puff bigger. I'm gonna try scaling it up a bit and maybe ditching, if it has any, transparency. I know blood is somewhat hard-coded.


- Minor Gripe, but can we have usefail sound effect? I have no clue when i'm touching doors, switches and walls because there's no sound. Yes, i like finding secrets and explore more!

I'll see what I can do. Would a generic 'thud' do?

The map glitches you mentioned are gonna be fixed. I'll also see if I can un-nerf the Minigun with jill pepper.


- Troll Blood weapon seems very ineffective against stronger enemies. But can it at least have fine damage to them instead?

If only morph projectiles could do damage as well as do their morphing. I'm gonna look into buffing the TBD's other two methods to compensate (and add expanding effects for the bigger enemies too)


- Trollsona enemy's projectile doesn't effect me anything. Is her attack suppose to make me a grub or something?

She's supposed to, yes! I dunno what caused that regression. The Jack and Jill pepper is supposed to allow you to revert and become immune to her shots (think like Steroids in Duke 3D) but not permamentally. I wonder if osmething is going on since I converted the code to ZScript.


- Jack-n-Jill Pepper makes you never crouch until it's all worn out. So you're temporarily stuck when you're using this in the vent or something.

now this is a new one on me. I've not noticed that problem.

I'll look into these. I'm gonna ask my colleagues if they can go over my code too.

by SanyaWaffles
Okay I've addressed most of these and am pushing out another beta. Gonna do some searching for a suitable sound for use failing

NOTE: Antivirus might flag custom GZDoom builds as viruses. I assure you mine is safe. If in doubt, use dev builds, enable mouselook and download the IPK3.

by SanyaWaffles
Another bugfix, this time re-instating the player's dynamic light when a weapon is being fired and a usefail sound has been added.

As the game is now in a state of being, outside the music, in a stable beta, I'm gonna not be doing announcements unless someone reports a massive bug. However, this doesn't mean development is done.

This is the Dropbox repo which contains the latest IPK3 and the latest WIGZDoom 64-bit bundled build. The IPK3 will always be the most current version. I have also configured the batch script so it will output a more readable to most people date (month-day-year) for the bundled versions.

I have updated the original post to reflect where you can get the new downloads.

I have refactored even more from ACS into ZScript, leaving only some rudimentary functions and the cutscene functions in the ACS libraries. The following updates are as follows:
Downloads can be found at the usual dropbox location.

by Mere_Duke
Tried to launch latest bugfix version with GZDoom 341
Failed.
The problem is here:

PPS Many thanks for the mod! I didn't expect cartoon-ish mod could be so cool to play. After this one, I started to enjoy mods like "Shadow of the Wool Ball" or "Adventures of Square".

by SanyaWaffles
Pushing a fix out now for this. Thanks for catching it.

by SanyaWaffles
My composer has put out the unedited, full soundtrack for Daytime Drama on his Bandcamp.

I'm going to be updating Daytime Drama real soon to become the first non-beta version to be released.

by SanyaWaffles
I am happy to announce that Daytime Drama has reached v 1.00!

I made a poster a while back and have decided to use it in the v 1.00 release. 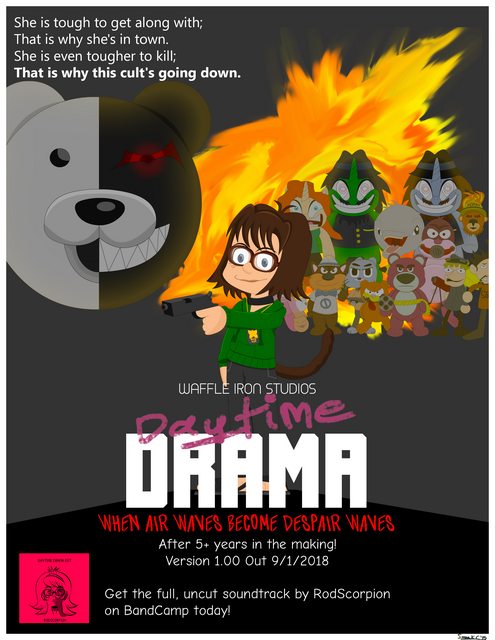 I also have found a way to distribute it without using a special executable on Windows 64-bit.

Standalone IPK3, gzdoom.ini with some setting changed, and readme.txt

Thanks for everyone's help in beta-testing this and giving great feedback.

by Csonicgo
Oh God, it's one massive shitpost. I love it. This is wild.

by Mere_Duke
First of all, a big thankyou for the mod! It's very cool despite a little too short for my opinion. But there will be DD2 so it's okay

Now some bugs/errors I've found:
1) The food is clipping through the fridge 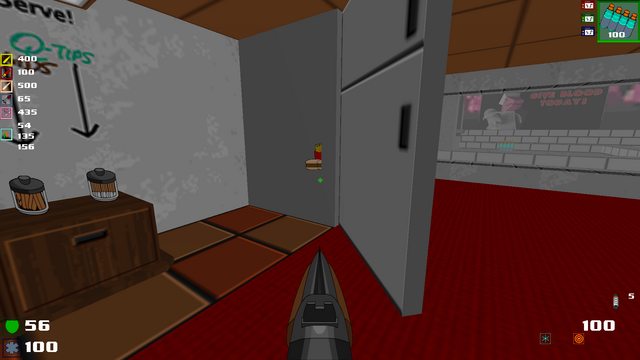 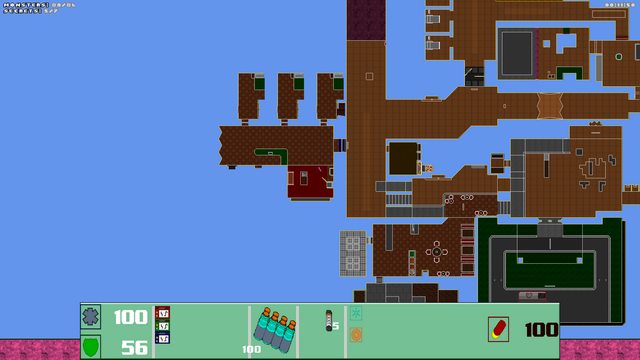 2) Texture misalignment after the wall lowered 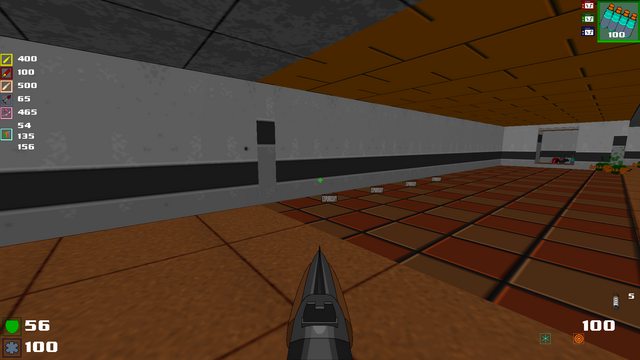 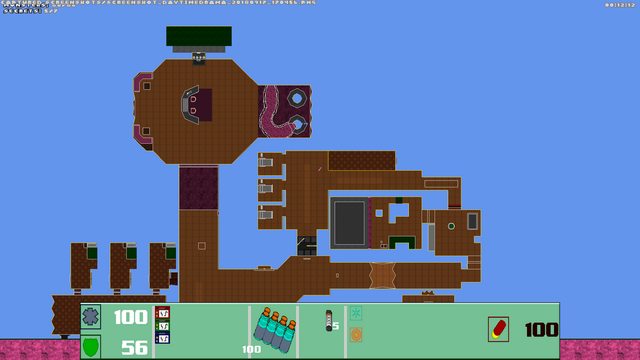 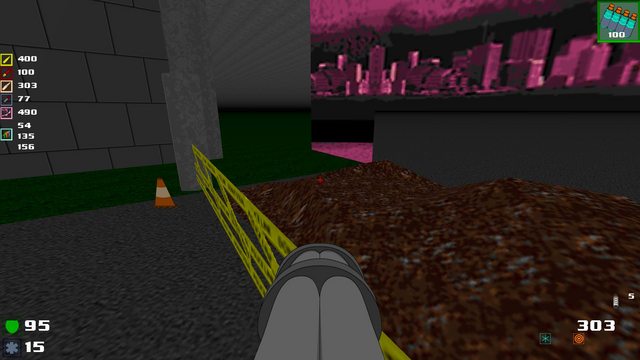 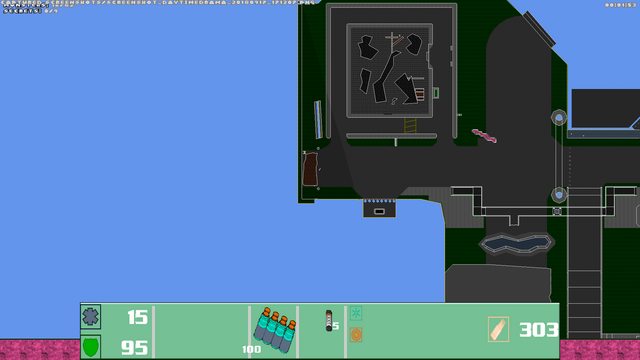 4) Texture misalignment before the wall lowered 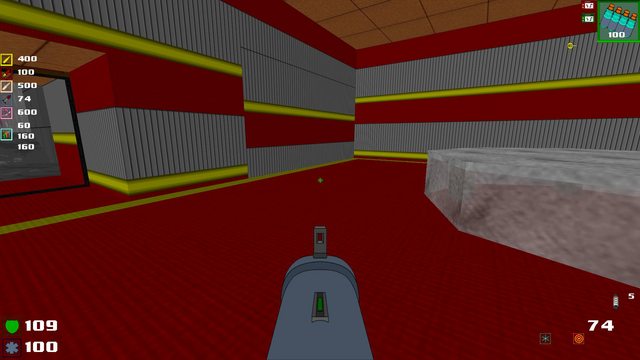 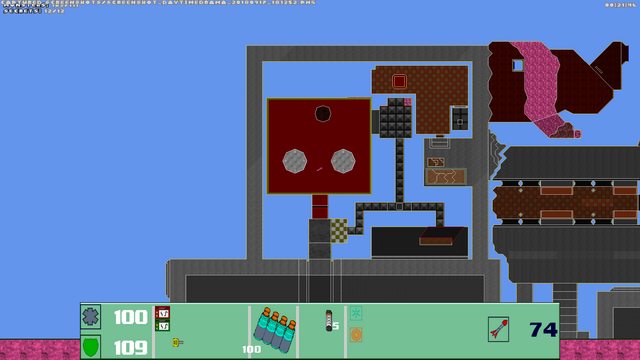 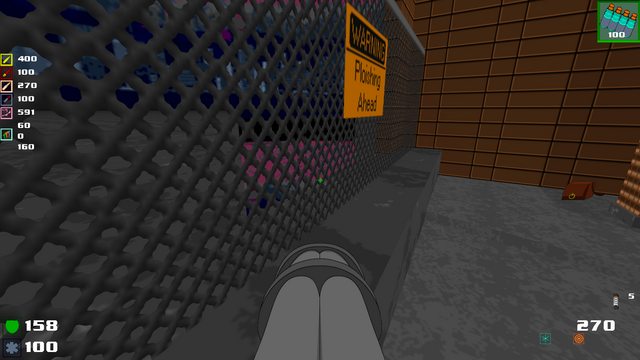 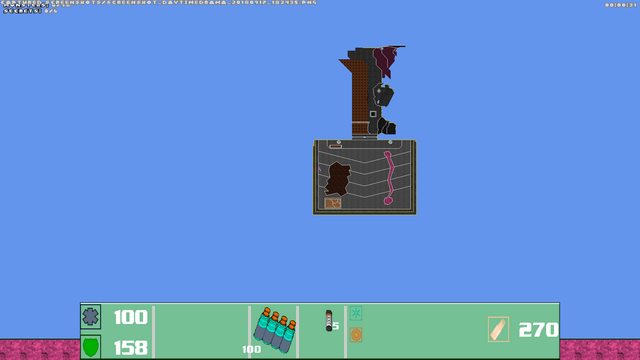 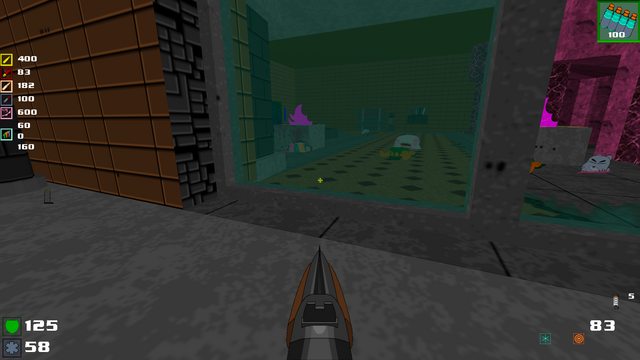 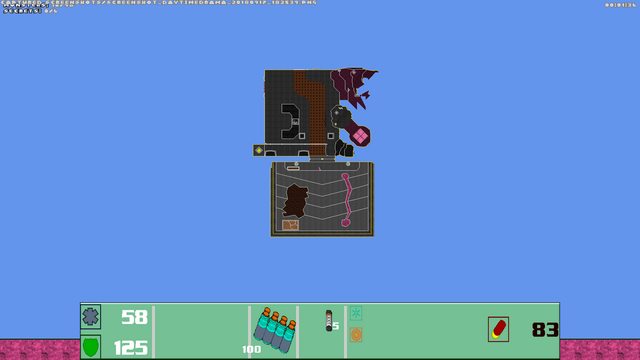 (For every map image, the player is in the center of it.)
Sorry, I forgot that map name isn't showing up with TAB; if it needs clarification, with some efforts I can tell exact mapnames of every screenshot, but I hope you remember those maps pretty well.

Also there is a huge textures misalignment on the outer side of the wall of the building on the secret map with the Christmas tree.

Played with the 4 (secret) difficulty and found out that ammo is a plenty. But for the firts 2 maps ammo was really scarce. Dunno if it was intended. (But I've found many secrets, like 90% through the game.)

Another thanks for the mod, and gl with the sequel that will (I hope) come up soon.

I played the only one with the Christmas tree. Where is the exit to the second one, could you tell me please?
P.P.S. I thought Sanya is male

Because in Russian, Sanya is a shortening for Alexader name.

by Mere_Duke
Forgot to say, the ending sequence (where all enemies show their sprite animations) was like a big HOM for me. But if I load ipk3 as pwad with doom2.wad, everything is ok.
Despairium Rifle heals the final boss. Dunno if it was intentional.

by SanyaWaffles
One of the HOMs you found leads to a secret, so I left it intact. And one of the wall textures is meant to be misaligned, meant to kind of be a tell that there's an ambush there. However, I did fix most of the things you reported.

I have uploaded v1.01 which fixes these graphical glitches as well as the windows not shattering properly.