(Crosspost from Doomworld and Zandronum Forums.) With permission from the creator of this mod, I've decided to create a topic for one of my favorite Doom engine mods in existence, The Ultimate Chex Quest by Boingo the Clown! This mod is an enhanced version of the original 2 Chex Quests, updated for modern source ports. It's long term goal is to eventually expand the original two games and add two whole new episodes, rounding out to 4 episodes of 8 maps each, 32 maps total. As of now, it's still just the original games though.

Some of you may have seen this mod in the past. It wouldn't be surprising, as currently the development has been going on since June 28, 2003. It's had active phases, inactive phases, a cancellation, hiatuses... but it keeps trucking on throughout it all. I have hope though that some day it'll finally see the completion it deserves.

None! The most recent version of TUCQ runs as an IWAD, so there's no need to use it as a PWAD. In fact, this may cause some errors depending on what you load it with.

Gone. That map blew chunks and the game is better without it. There's actually a brand new Cinema map in progress by Boingo, but you'll have to wait for a future version to come out before you're able to play it. The current plan I've heard is for the next version to include it.


Wait, what about Chex Quest 3's maps and flemoids? Aren't they going to appear too?

No, TUCQ was started before CQ3 was created. (In fact, it's the mod that inspired it!) The story was mapped out long before CQ3's and varies considerably. Boingo wants to ensure all the work done is fresh and new, not just a rehash of another persons work. This includes the redone Cinema level from that game as well.


So, uh... what about the maps after E1M5 and E2M5? Or the entire last two episodes for that matter? Those'll take time to make for sure!

Indeed they will, and Boingo knows that. That's why he's very open to accepting maps from others, under certain guidelines. If you're interested in submitting maps, Boingo posted guidelines that are still fairly relevant here.


Why call this a 'Megathread'? Isn't it just about TUCQ?

It's about TUCQ, yes... but I've also included some of the add-ons developed or being developed too. This was actually the biggest reason for me posting this topic. I wanted to gather interest in the project itself, but also for the couple of community projects that are being created for this game that need mappers as well. That's what this next section is devoted to... Back in 2006, a member of the Chex Quest Fan Forums named Strife (Notable for going on to make the fan game Freedom Planet) created two level packs for TUCQ, back when it was still on Doom Legacy. Since there have been plenty of changes to TUCQ since the Legacy days, the original mods didn't work with the current versions. I've since gone through and fixed both mods, combined them into one package, and rereleased them with permission from Strife himself. The maps still hold up as some of the best Chex Quest maps released. 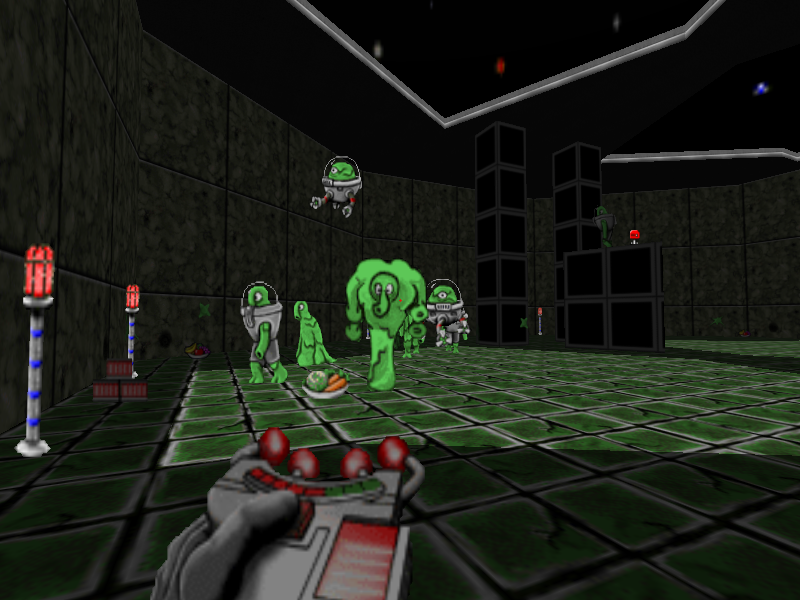 This community project aims to convert the classic Doom II megawad Vilecore to TUCQ. The current release has 11 maps in it. The goal is to eventually convert all 32 maps to TUCQ, but to do that we'll definitely need plenty more people to help with converting textures and items to what they are in TUCQ. The current map completion rate is as follows:

This community project aims to complete an episode for TUCQ consisting of beautified Oblige maps, or however many maps that get submitted will be compiled anyway. Boingo created special files for use with Oblige to make it possible to generate more TUCQ-friendly maps to modify, which is avilable here.


My hope is by posting about this project on these forums that I'll be able to garner more interest for it, since time has seemed to forget about it for the most part. I hope to see mappers get interested and join in the sub-projects, and maybe even see some maps make it into the main project as well!
Last edited by Death Egg on Sat Feb 04, 2017 8:29 am, edited 11 times in total.
Top

Since this is a topic about Chex Quest , might as well add this.

For some reason , Sgtmark 4 had the idea to implement BD with Chex Quest as some kind of easter egg.

Now you are not a cereal space man sending green gooish aliens back to their home planet with teleporting devices but one who obliterate those aliens to pieces with Doom Marine arsenal.
Top

Chex Quest was a neat idea, and can show that a Doom game can be for kids.
Top

Is that even still going?
Top

Speaking of which, is there a mod out there that only replaces the weapons and enemies by their Chex Quest counterparts, i.e. Sticky Gals?
Top

Will it be GZDoom-only?
Top

Well, not for me, i'm just teasing you people.
Top

Wiw wrote:Is that even still going?

Speaking of which, is there a mod out there that only replaces the weapons and enemies by their Chex Quest counterparts, i.e. Sticky Gals?

I've seen a few in existence but the quality of them can be questionable at times.
Top

I know of Samsara, but that only lets you play as the Chexwarrior.
Top

Last night I was able to finish MAP11 and MAP12 of the Vilecore conversion. I'm not at home right now so I can't post screenshots, so I'll either do that tonight or have Boingo do it for me.
Top

Sorry for the wait, kind of forgot to post the screenshots. I've since finished MAP09 and begun work on MAP19 of the conversion, and have shots of all four maps in the spoiler: It is only a quick mention, but Charles Jacobi brings up T.U.C.Q. in an interview here: