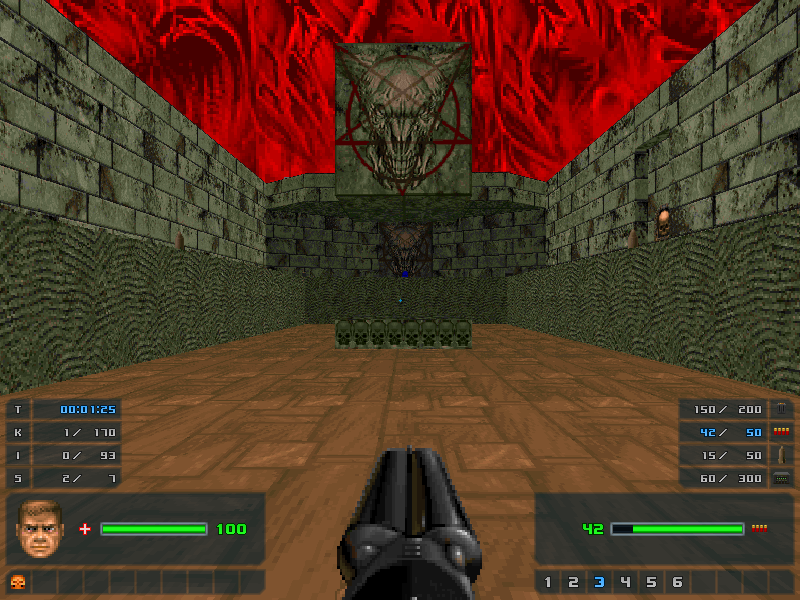 Still room to show all of your reserve ammo over the ammo counter. Hint hint.

This is a very very nice HUD, exactly what I was looking for.

Some suggestions would be for the ammo counter to also display the max amount as well as the current. and for the HUD to work when "hud_scale" is set to true which right now makes it look messed up
Top

I think Health could use never being blue. I like that it changes color when it gets lower, and it fits better. But then it goes up and gets blue, like the rest of the screen. Thats not ideal, in my opinion.

Plus, I'm not sure I see the need for the weapon numbers, and I'd rather be able to see how much ammo I have.

Blue Shadow wrote:Note: Due to some issues I ran into, which I couldn't find a solution for (yet), the HUD replaces the normal status bar and not the fullscreen one.

What sort of issues? As far as I can tell, you should be able to just use "statusbar normal, fullscreenoffsets" to make that work...
Top

Ack. Yeah, this should definitely be replacing the fullscreen bar. I currently get this: This definitely looks great from the screenshot, though! Simple, yet attractive. Hopefully the issue is worked out soonish.
Top

You could also set the statusbar's Resolution to a number like 800x600, so that even if a user has HUD_SCALE turned on, it'll only scale up to that.
Top

wildweasel wrote:You could also set the statusbar's Resolution to a number like 800x600, so that even if a user has HUD_SCALE turned on, it'll only scale up to that.

SFJake wrote:I think Health could use never being blue. I like that it changes color when it gets lower, and it fits better. But then it goes up and gets blue, like the rest of the screen. Thats not ideal, in my opinion.

I appreciate your opinion, but it won't change, sorry. I'd like to keep some consistency with the other bars colors (armor and ammo) as blue being the "normal" color. Turning the health bar to yellow and red is special case.


Plus, I'm not sure I see the need for the weapon numbers, and I'd rather be able to see how much ammo I have.

I thought about not including the arms (weapon numbers), but sometimes I wish I had a way of knowing if I already have weapon x and weapon y. I could try and press the keys on my keyboard to see, however, with the arms dispaly, all I need is a quick glance on the right.

This of course applies to the "reserve" ammo display. That's why I'm gonna try and include it.

Well, they're more of annoyences really; one is related to the inventory bar, which I think I've found a solution for (I haven't tried it yet) and the other is the mugshot.

Since I'm using the fullscreenoffsets flag, merely adding the mugshot won't work well, since it'll be too small for the HUD. That's why I scaled it up 200% with the use of TEXTURES. It worked well for the HUD but not that well for the standard Doom status bar. I tried "defining" a new separate mugshot to use specially for the HUD, alas I seem to have failed. So, that's why I did what I did, because I'd rather have it replace Doom's standard statusbar than have a "broken" one.

Long story short; if I want the HUD to replace ZDoom's fullscreen HUD, then I'd like to keep Doom's standard status bar intact and unaffected by any changes I could or might have done to my HUD (like the mugshot case above).

For the hud_scale issue and as per wildweasel solution, I used the resolution command and it doesn't seem to affect wherther you've hud_scale on or off, which is what we want. However, I used 640x400 and not 800x600, as the results didn't turn out quite well with the latter.

First post updated to hopefully fix this issue. Could someone test this and see if it works for them as well, please.
Top

much better, works with hud_scale now

except the inventory bar is not scaled still
Top

Man! I never realised how buggy this thing actually is when I uploaded it. It's all because of this hud scale thing. If I knew it would be such an issue, I would have refrained from uploading it.

Anyway, first post is updated with another hotfix. Is it any better?

I get an error when I try to play with this in Skulltag.

This is a nice custom HUD. If you get the fullscreen version sorted out, I hope you scale down the graphics so it's smaller. Also, shouldn't the ammo icon change depending on the current weapon selected? Currently all weapons use the shotgun shell icon.
Top