Projects that have specifically been abandoned or considered "dead" get moved here, so people will quit bumping them. If your project has wound up here and it should not be, contact a moderator to have it moved back to the land of the living.
83 posts

I thought I'd have a crack at another one of these wad contests, see who's interested.

The contest is to see who can make the best/funniest/coolest game mutator WAD for Doom2. What's a mutator? Well I don't use the term often, but I thought it would be the best way to describe it. Basically the PWAD should alter the game in some shape or form, even if it's a tiny change. No new maps or anything, it effects the whole game which means it can be used with other levels and WADs.

Current Entries Note that any WADs that have been posted as "unfinished" or whatever will not be listed. Also people with more than one mutator will have to pick a final one to be used for voting.

To enter, just post a link to the wad with a brief description of what it does (And one that is INFORMATIVE! Tell us what the PWAD is going to do!!), with a small screenshot if you like. In order to be valid the PWAD must follow these rules:
So what can you edit or make? Anything! Modify the weapons, make new monsters, make some playerclasses. It's up to you, but you can only use resources from Doom 2!

Here is an example of a valid entry:


Cutman wrote:10x
Multiplies the amount of Doom 2 monsters by 10! 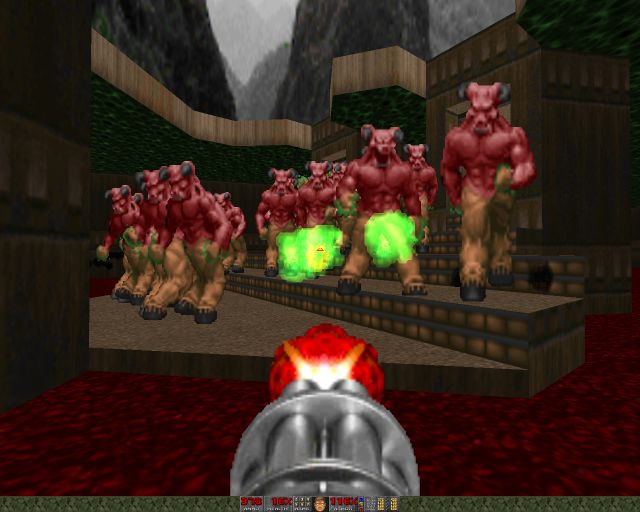 You can upload anywhere (sendspace, megaupload etc). This example just happens to be uploaded to idgames.

Judges, voting, the prize etc will be decided in the near future if you wish to participate. I'm taking entries now, get cracking! I hope to see some whacky, fun and creative ideas.

Seeing as I can use ACS, I'd participate.
Top

Randoom v1
Randomises most monsters and items in a map. Bosses and keys remain untouched, so as to be at least partially playable.

You can expect an entry from me.
Top

I might participate, mainly just for the hell of it because I'm not 100% sure if I can compete with most of you guys as I don't know any ACS.

First I need to think of a good idea.
Top

Don't know what to call it, but here it be:

The level progression. It's all wrong. And I could swear those four were supposed to be Mancubi! And that Revenant, he isn't shooting the right type of rocket! And what the heck happened to MY rockets? It isn't random, it's just wrong.
You do not have the required permissions to view the files attached to this post.
Top

I'm working on a submission right now. It's shaping out rather... interestingly.
Top

heh looks cool, since im getting more competent with decorate i should give this a try...

a really odd/fucked up mutator might be on the way from me...

of course ill probably stick to something sane...
Top

Features Include:
- Radical Alteration of monster behavior! Imps shoot plasma balls! Chaingunners have gone insane and explode when they die! Mancubuses can fly and Pain Elementals shoot rockets out of their mouth (lots of them)! And Barons/Hellknights are the new "I hope I don't run across one of them" monsters!
- Weapon Upgrades! Weapons shoot more, have more ammo, and do more damage!
- "It's Not a Bug, It's a Feature!": Sometimes it's impossible to switch to a certain weapons or pick up certain items! This will definitely be fixed in the next version! I like to use exclamation marks!

IT'S THE NEXT GENERATION OF DOOM -
SO WHAT ARE YOU WAITING FOR???
You do not have the required permissions to view the files attached to this post.
Top

This replaces everything except Nazis and the bosses. With what? Weaker Archviles!

Thing is, everything can be revived.

To compensate, they drop a load of ammo each time you kill them.
Top

This is what I have so far, not many changes to the monsters yet, and mostly for me to get a feel for decorate.
Do not expect greatness unmatched, only lols.

I'll submit this one, in its current form.

Unfortunately, it's not finished yet due to underlying engine issues, but they should be fixed later on. In this mod, you take on the role of the very monsters that you once killed, to kill other players in their forms. While under the morph, you will gain some of the monster's weaknesses and strengths, and use them to your own advantage. Swarm your enemies with Lost Souls as a Pain Elemental, or charge at them right through the air as a lost soul yourself. You can splatter them with the Cyberdemon's Rocket Launcher, or pilfer them to death as a Spider Mastermind. The choice is yours, and the only requirement is you find the monster you want to become!
You do not have the required permissions to view the files attached to this post.
Last edited by Rachael on Thu May 07, 2009 3:24 am, edited 2 times in total.
Top

Okay I better add some official guidelines, i.e must provide a meaningful description and a screenshot

I've been working on one myself which means I won't be judging. Also try to remember folks, it doesn't have to be a joke wad

Here's my entry for now. I might improve it later.

This changes the rules of Doom2. Instead of finding the exit, you have to kill every monster in the level within a time limit. The time for each level is calculated by adding the par time by the amount of monsters (stronger ones give more time, weaker less). Exiting the level like normal will kick you back a level, so there's no cheating! When you start the game, you always start with your pistol and fists.

I'm not actually sure if it's remotely possible to beat with all the doom2 maps, but I had a run through the first few and it seemed okay. Ironically MAP01 was the hardest map that I tried!
Top
83 posts