Gez wrote:That's the plan, but the super-secret map is not publicly available yet -- it's waiting for the custom monster roster to be finished first.

Work starts next month, after I finish my current large work project. Haven't had time due to work.

Been behind for HF 1.1 due to work, but I've begun working this week on its assets. The Sharkdemon is finished, I'll need to add the Sharkman and Sharkopter next. 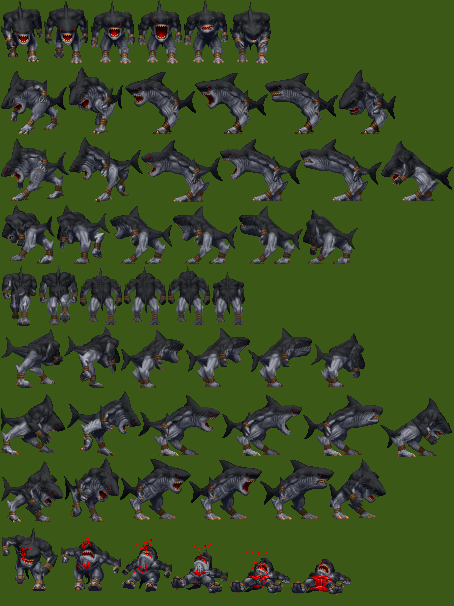 Below is a list of sprites I need to make for 1.1:

-Alt-attack and melee animation for Hellduke, as well as touchups that was left unfinished for 1.0. This one will take some time since I lost the finished model, and only have an earlier model to work with.
-Alt-attack for Director and Behemoth, as well as some fixes for the missing underbelly chains during the Director's death animation. This should be simple.
-Crouch sprites for the player sprites, as well fixing some minor mistakes with the male-player's sprite during the attack animation. Will also be touching the sprite up to make them on-par with the rest of the stuff in the mod.
-New death animation for Guardian that is long overdo.

Below is a list of changes to the maps:

-Finished updetailing certain areas in the maps, mostly for decorative purposes in areas outside the map. I've already started on this for maps 1-4, and 8.
-Added much needed texture variation for later maps that I ran out of time for.
-Fix/change some boring monster placements in the later maps.

This will be the final version of Hell-Forged. I'll leave the mod up for maintenance but will be making no more additions to it, as I go into production for its sequel (details below)
Last edited by Amuscaria on Mon Feb 22, 2021 11:51 am, edited 4 times in total.
Top

Impressive work as always! I'm eager to replay through HF in its complete version once it's ready.

Anyways i understand. With this super high quality, there's no doubt it takes a lot of effort and time. Enemy and weapon sprites are all top-notch and even 1st episode felt very long. It's been still WIP after it came out, no? Just don't push yourself too hard with the accuracy or vanilla-perfection. As long as you can make it, you really can make it.

That's some very nice shark sprites there. Very good! Though it's taking a long time.

Right after the Sharkman and Sharkopter is the SharkBrute and Megalocopter, correct?
I wonder if those sharks are going to get a Reelism 2 battle...
Top

Those have been cut from the project. I think 3 custom monsters for one joke map is enough.
Top

Sharkman sprite. Still working on the colors. Currently based on the lemon-shark colors. 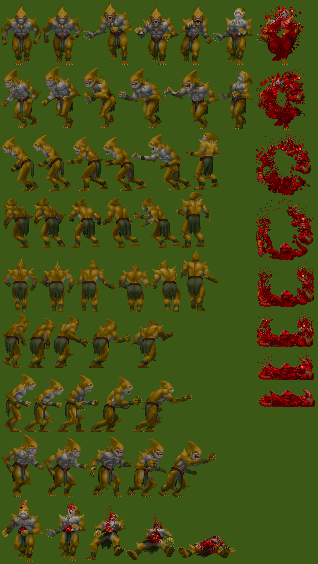 Bug's pretty rare, but I've seen it enough times to know it wasn't just a random glitch. I'm guessing it has something to do with the src pointer. I want the kill from the fire to be attributed to the player that shot the porjectile, so I assumed I have to use AAPTR_TARGET (?).
Last edited by Amuscaria on Mon Feb 22, 2021 11:50 am, edited 1 time in total.
Top

I really love the tropical look of that yellow fella. Nice work, as always.

And about the Immorator's fire glitch, i think i saw it looping once before but i think it is rare. Recently tried the weapon so far but nothing happened.
Top

you created one of the best doom monster. New one, matching the vanilla artwork flawlesly.
they are excellent as they are now (i am tempted to check them in game).
Top

These sprites are so wonderfully stupid. I'll definitely replay this mod when everything has been added.
Top

This is definitely the best sprite work you've ever made, even better then temple of the Lizard Men.
Top

Bug's pretty rare, but I've seen it enough times to know it wasn't just a random glitch. I'm guessing it has something to do with the src pointer. I want the kill from the fire to be attributed to the player that shot the porjectile, so I assumed I have to use AAPTR_TARGET (?).

I've had the same problem with my own mod, and managed to fix it by changing the Death state to a 0-tic duration. I think you will need to place all the effects on an actor spawned by A_SpawnItemEx, rather than sticking them in the Death state. I actually just talked to someone about this after reading your post, because I thought it was interesting how you and I had a similar problem. To quote them:
"FastProjectile doesn't call Actor.Tick(). It's a bit weird. It's better to spawn the effect on death."
"The Death state of a FastProjectile shouldn't contain anything complex."

Hopefully this helps! For reference, my code looked like this when it triggered the bug:

But was fixed when I used a 0 tic duration as shown below:

Here is some extra information on the matter:
viewtopic.php?f=2&t=68963
Top

@Mor'Ladim: Ah thanks. I will give this a try. Thank you for the in-depth explanation.

Hello, I just wanted to say that this mod is awesome and I can't just hold it has "a mod" so now is on my steam library as "standalone game" because why not
[imgur]https://imgur.com/jgNfwiZ[/imgur]
Thank you very much for your work, I'm enjoying my time with this game.
Top

jonok wrote:Hello, I just wanted to say that this mod is awesome and I can't just hold it has "a mod" so now is on my steam library as "standalone game" because why not
[imgur]https://imgur.com/jgNfwiZ[/imgur]
Thank you very much for your work, I'm enjoying my time with this game.

I would love to make this standalone, but I don't think it's legal for me to just copy all of Doom 2's sprites and sounds into the wad.