by DELTAtheDboi005
Um guys, i think i just broke SLADE.

I was kinda not happy with the update that came out, so i downgraded and somehow that broke the editor. The version was 3.2.0 and I downgraded to 3.1.3, which broke it.
Even when i uninstalled it and reinstalled it, it was still broken. The errors began with the start page not appearing, and the graphic lumps not saying that they were a PNG or a doom graphic, and straight up not appearing on the offsets menu.

EDIT: I fixed it, turns out, I didn't fully remove slade from my computer, when I did uninstall it completely, I reinstalled it and now it works. I now currently have v3.1.2 beta 5 and it works perfectly.

by wildweasel
What exactly is broken?

by Kappes Buur
How did you uninstall Slade3?
Sometimes it is not enough to just uninstall, you also should delete the old Slade3 configuration folder.

To be on the safe side, reinstalling should be into a new folder.
Running Slade3 after that creates a new Slade3 configuration setup in
C:\Users\computername\Appdata\Roaming\SLADE3, like this: 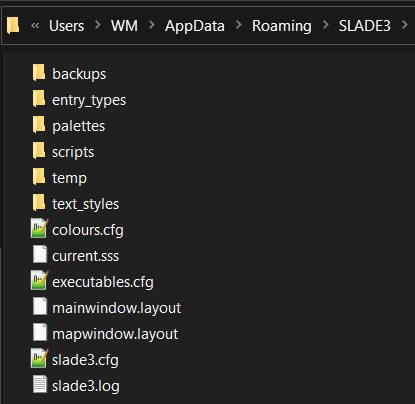 Some folders may be empty.
Of course, your computer will not be named WM.


If something went wrong, then check out the slade3.log file.

by DELTAtheDboi005
Yea thanks, I had to use the search function on file explorer, scan the whole computer, delete every trace of slade, and reinstall it and now it works great!, i also updated it a few hours later as well, So i guess making a post about it was completely pointless...
All times are UTC-06:00
Page 1 of 1