Trance wrote:Fans like me aren't hallucinating or awash in nostalgia here.

Okay, my point is that no one here is saying that

It's perfectly fine to feel the way you do (and as noted I agree), but the way you're posting kinda feels like you're looking for a fight where there isn't one to be had. Probably not your intent, I know, I just want to advise you how it's coming across.

I do feel there's worth in this conversation and I'd like to see some healthy discussion on the state of Trek (though I don't have much to add myself that hasn't been covered thus far). Just dial back the rhetoric a bit, that's all I ask.

I have to admit, the trailer is better than I expected. But Discovery trailer also wasn't that bad originally. Nonetheless, it's sad that only way they can make Star trek feel at last little bit like Star trek.is by dragging old crew back.

Also did ever 7 of 9 met Picard during any series or films?
Top

No, only in the novels. And there's absolutely no reason they shouldn't have met over the years anyway.
Top

Yeah, probably. Also there is no reason they should be friends other than convenience for series writers. But hey, it's 7 of 9, I am ok with that.
Top

Yeah I think it's important not to belittle others with different opinions (not that I'm saying its happening here, am just reaffirming the best course of action haha), there's some REALLY savage Trek groups that either delete and ban anything to do with Discovery or Discovery groups that do the vise versa to old stuff. Such division and hostility over a franchise that's meant to be about unification and bettering ourselves.. oh and then there's the groups where you can't even find people disagreeing over Star Trek because they're all too busy arguing about Trump.. Argh hell I'm becoming more annoyed with the fanbase than I am with the franchise lmao!!

Anyway personally I see merits in both sides opinions. Nothing beats oldschool Trek for me, however I do still enjoy the new stuff even if it is more glorified and hollow. I'm a huge Trekie, I've watched every single episode of every show, collect the boxsets, own nearly all the games, and as previously mentioned I'm the creator of Star Trek ZDoom lol. It took me a while to get into Discovery's first season but I'm glad I stuck with it as season 2 is waaaay better with Captain Pike, Enterprise & Spock etc, less war, Klingons with hair lol and more 'fan service' in general. The new films are filled with little things that annoy me a bit but are very exciting and fun to watch. Kinda feel the same about Star Wars and enjoy all the new stuff although I think I actually do hate The Last Jedi lol. Anyway yes ST Picard could be bad but I'm excited about it. Finally a sequel story instead of a prequel, favourite characters and actors (instead of recasts) coming back to a Trek show with a budget they would have killed for back in the 90s lol, and the possibility of even having story/character sequel shows related to the other trek shows (eg Picard could visit DS9 or catchup with more Voyager crew members in seasons to come). Oh and yeah Orville does feel more like classic Trek which is why I love that too haha.

Just found this trailer analysis by Trek Central. Looks like they going with post apocalypse (the controversial supernova event) Romulan's experimenting with Borg technology presumably to try and regain some lost power. Gotta love the lab sign saying 5,843 days without assimilation lol! Looks like they have control of a cube too. Considering Romulan's and Borg were my favourite villains from TNG this pleases me greatly.

I'm actually kind of excited for it. I really liked the movies with Picard, and kind of wanted more of that. I was still kind of hoping for a more TNG styled show but it seems they're going with a more modern approach to the series, which is fine by me. I'm curious to see how Picard and 7of9 work together. And I'm excited for the doggy.

I'm sort of okay with the new Star Trek, I liked the first and third JJ ones (the one with Butternut Crinklefries as Khan was pretty bad IMO). I never watched Discovery and I've heard a lot of mixed reviews of it, some of my friends like it, some hate it. So yeah maybe I should not 100% optimistic for the new Picard show but I'm definitely giving it a chance.

But yeah if I don't like it I can always wait till later in the year when Orville Season 3 hopefully comes out.

What bothers me most about data in the trailer is his eyes. I know that he always had yellow eyes, but those ones look awful in comparison to the older ones: 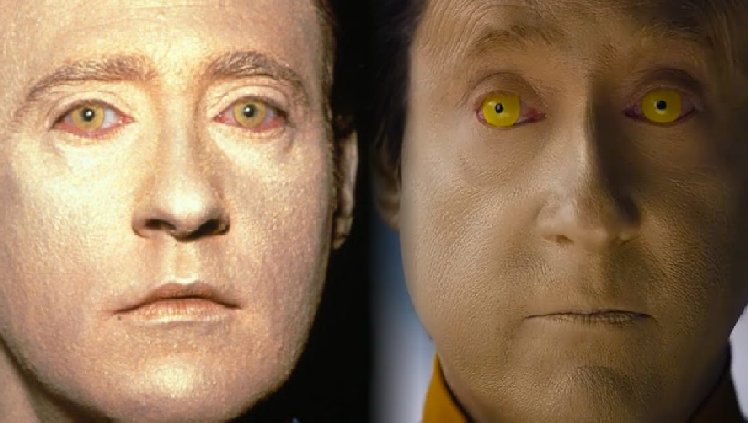 Shame that it's impossible to make realistic looking eyes for absolutely packed with futuristic technology androids. I mean, it's not as if people have been making realistic prosthetic eyes for hundreds, if not thousands, of years or anything.
Top

I have the feeling that those are probably placeholders and will be enhanced with digital effects later. At least I hope, because they are clearly really obvious contact lenses. I'm more concerned about the fact that they're using Brent at all, at least on-camera. For an android that supposedly doesn't age, he was really showing his age even in the last movie I saw, over a decade ago, and all the caked-on makeup in the world can't hide that.

Really, Data would be an ideal candidate for a digital face double. You know how Tarkin in Rogue One had that vaguely uncanny valley feel even though visually there was nothing wrong with the fidelity of the replacement? Or young / evil Jeff Bridges in Tron Legacy? The What more perfect use case than an android who is just slightly off-human? Hell, the young Arnold in Terminator Genisys is a great example of this.

Caligari87 wrote:Really, Data would be an ideal candidate for a digital face double. You know how Tarkin in Rogue One had that vaguely uncanny valley feel even though visually there was nothing wrong with the fidelity of the replacement? Or young / evil Jeff Bridges in Tron Legacy? The What more perfect use case than an android who is just slightly off-human? Hell, the young Arnold in Terminator Genisys is a great example of this.

I thought so too, but they probably don't have the Disney budget.
Top

Oooooh looks like Robert Picardo, the EMH Doctor from Voyager might be in Star Trek Picard too. God this show opens up so many cool things for not just TNG fans but Voyager and DS9 fans too!

This sounds more and more like a rehash of the past than something interesting moving forward...
Top

Graf Zahl wrote:This sounds more and more like a rehash of the past than something interesting moving forward...

Well I guess it depends what you want out of it.

All the other recent shows and films have been prequel or remake stories with young recast actors. Whereas this is the first show that's gone with original actors in a sequel story. So I commend them for doing something different finally!

So if the 2 products are different stuff then I guess that means if people hate one then they've got the other. If they hate both.. well.. there's always reruns of oldschool trek haha.
Top

I see both approaches as being the same pattern - reuse old things people remembered (i.e. the clothing, the names, some classic phrases, now the actors) for the casual crowd that watched the originals in their youth but barely remember what they were actually about. Or young people that heard about the hype that never watched the originals.

If they really wanted to move the universe forward they wouldn't be beating the dead horse of the Bork or androids like its still interesting in its original form.
Top

RED ALERT! We've got another new trailer. The beard is back! The old uniforms make a cameo! 7 or 9 is doing her Ronin thing. And we introduce the most hated admiral in Star Trek history haha!

Spoiler:
I loved the opening shot with the camera closing in on the Enterprise D (which had some interesting design modifications) and going through the window into to the room.. the kind of shot you always wanted to see as a kid watching TNG but knew they couldn't really do effectively (well not without spending some heavy money lol, which is kind of ironic considering the 60s failed trek pilot sort of has a camera through bridge window shot)..

I enjoyed the whole episode but I feel like I can't quite give judgement yet. I need to know more about what's going on and need to see how things pan out story wise.

Also the zero mention of Lal and Lore seems a bit strange in a world where the daystrom institute desperately wanted to replicate Data. I mean what happened to their parts after they were disassembled? B4 was in a drawer so where's the Lal and Lore drawers haha?

First thought was.. did the writers forget them?.. but that seems unlikely consider they brought Hugh back which means they clearly remember Descent 1 & 2 which Lore was in. The whole Daughter 2.0 storyline suggests the Lal episode is something they know too. Plus Frakes directed that one and he's involved in Picard.