Requires the hardware renderer, and an OpenGL 3.3 compatible video card.

Have you ever wondered how much better Doom would be if Doomguy could get drunk off health potions?
Well, thanks to the new QZDoom postprocessing shader system, that dream is a reality!

KDiTB comes with a few menu options:
[spoiler=Menu Options]Permanent Drunk Effect: Self-explanatory. Enable to make this a nausea mod, you madman.
Drunk Effect Size: How large the wobble is, measured as a fraction of the screen. Clamped between 0 and 0.1, because larger values get weird. Change the CVar manually at your own risk

.
Blood Alcohol Content Threshold: How much alcohol doomguy can take before the effects kick in. Defaults to 100, or ~3 health potions.
Effect Length: Self-explanatory, measured in seconds.[/spoiler]
Thanks to everyone that helped implement this feature into the engine, this is great - I use this as a silly jokewad, but the code here could easily be repurposed for a serious underwater shader which would look pretty slick. Edit: Done! See below.[/spoiler]
Universal Underwater Shader
[spoiler=Universal Underwater Shader]A small shader which adds a wobble effect to the player's view when underwater. Should work with any mod, and any mapset which uses swimmable liquids.

Comes with one menu option, Water Effect Size, which controls the size of the effect - measured, again, as a fraction of the screen.[/spoiler]
DooD Shader
[spoiler=DooD Shader]Does what it says on the tin, really. Mirrors your screen down the middle.

Note: Gutawer is not responsible for any loss of sanity from playing DooD Shader - try at your own risk. 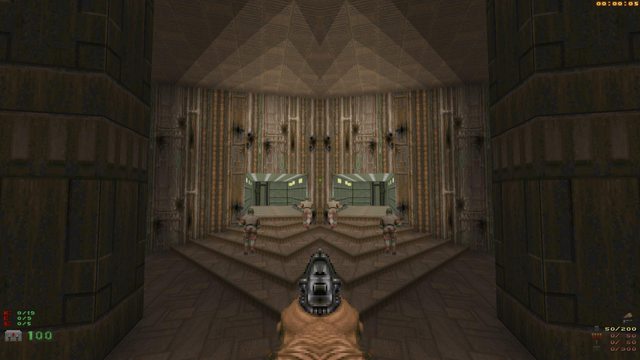 Download: https://www.dropbox.com/s/x8e4xjdhrbp4m6n/DooDShader.pk3?dl=0[/spoiler]
Note: Feel free to use code from any of these in your own projects, so long as I get credited for it! I'd be happy to see any of these get used in a proper project

Re: [QZDoom] Knee-Deep in the Booze

Now just combine it with this and it's the perfect mod:

I've changed the topic title here to serve as the place for any future shaders I make - on that note, two new shaders added to the OP

. And, also, I've updated the Drunk shader to be compatible with the Underwater shader, since there would have been some name conflict otherwise, if you'd like to use the two together, you should re-download KDiTB.
Top